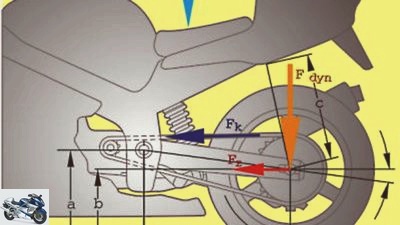 Full steam ahead, the chain pulls the rear wheel with all its might, gets the motorcycle going? and the rear suspension is sometimes in trouble. MOTORRAD tested how strong it was with a Kawasaki ZX-6RR.

Screeching, the green ZX-6RR rushes around the small circuit in Hockenheim, lurches dangerously when braking, folds into an inclined position and flips out of the corners at full throttle. Seconds later she is standing at the boxes, is plugged into the laptop, and the heads of the test team crowd curiously over the screen. And then the 600 is back on the assembly stand, screwing and measuring are in a hurry, the swing arm is brought into a new position millimeter by millimeter. Helmet up and again down the post.
Why the effort? MOTORRAD wanted to know how changing certain parameters would affect the driving and suspension behavior if the sheer force of the drive chain breaks. That’s what the new one is for Kawasaki ZX-6RR is the ideal guinea pig, because the engineers have given it a variable pivot point by means of exchangeable inserts. When accelerating fully, besides the chain hoist, other forces, such as the pulling force on the rear wheel or the dynamic wheel load shift, have a lasting effect on the rear wheel suspension.
About the terms: The vertical component of the chain tensile force between the pinion and chain wheel exerts a force on the rocker arm bearing and thus on the suspension, depending on the position of the pinion, rocker arm and wheel bearings and the size of the pinion and chain wheel. the
Tensile force, the technical term for the driving force that acts on the contact area of ​​the rear wheel on the road, acts parallel to the road on the wheel axle and from there on the frame via the rocker arm and rocker arm bearings. Depending on the inclination of the rocker, a resultant force acts in the vertical direction at the pivot point. If the pivot point is higher than the wheel axle, the pulling force lifts the rear of the vehicle and vice versa.
Third in the league is the so-called dynamic wheel load shift, more precisely its effect. Depending on the wheelbase and the height of the center of gravity, weight shifts from the front to the rear wheel when you accelerate, and the rear wants to compress due to the additional inertia force. Depending on the size and direction of the three forces mentioned, the motorcycle either deflects or compresses when accelerating.
Usually the pulling force causes
with a correspondingly steep incline-
ten swing an anti-dive effect that the machine at full acceleration
lifts out of the springs at the back. The advantage: the steering geometry changes only very slightly, the shock absorber is relieved and does not bottom out despite the extremely high wheel load (with a wheelie it is 100 percent of the total weight). However, this only works if there is a sufficient height difference between the wheel and the swing arm. In current sports motorcycles with a total suspension travel of around 120 to 130 millimeters on the rear wheel, this is
Difference in height approx. 80 to 90 millimeters with the standard setting of the chassis, loaded with the weight of the driver.
If a smaller distance is chosen from the design point of view, i.e. if the difference in height between the wheel axle and the swing arm mounting approaches zero, the anti-dive effect of the tensile force is also lower. The fatal thing about it: If the pivot point moves under the wheel axle, the tensile force even supports the compression movement. In such situations, the spring system becomes literally in itself when accelerating
compressed, the suspension can even go on block. The motorcycle becomes rear-heavy, the steering geometry is changed in the direction of unwieldy and the rear suspension is blocked. This can occur especially with touring bikes if the driver does not adjust the compression and rebound travel to the payload.
One by adjusting the spring base
Contrary to popular opinion, increased preload does not increase the spring rate, i.e. the hardness of the spring, but changes the ratio of compression to rebound travel. This allows the rear of the vehicle to be raised so that an almost constant spring travel ratio of around 70 to 30 percent spring deflection and rebound travel is achieved despite different loads.
During the test drives with the Kawasaki ZX-6RR, depending on the setting (see box on page 42), there were noticeable changes in driving and suspension behavior. However, changed swing arm bearing positions in the range of up to four millimeters and thus different chain tension forces were far less noticeable than the variation in the swing arm angle by lengthening or shortening the strut.
Of course, the anti-dive effect increases the pulling force accordingly
steeply positioned swing arm only if the force on the rear wheel is great enough. In
cornering with little gas dives
the suspension without any influence of the driving force due to the centrifugal force. Only when fully accelerating does it lift? the data recording (see page 40) shows this clearly ?? the stern from the
suspension.
If sports riders raise the rear too much to affect maneuverability and weight transfer, the shock absorber can rebound as far as it will go when accelerating. Consequence: The tire grip suddenly breaks on bumps because all negative suspension travel is used up. The change in the static wheel load distribution caused by lowering or raising the rear is negligibly small. On the Kawasaki ZX-6RR, the rear wheel load with rider is reduced by just 1.1 kilograms or 0.4 percent of the total weight with the rear raised by 35 millimeters.
An optimal design of the swing arm geometry for all driving situations is practically impossible. Is always ?? how
with all suspension settings ?? the best compromise asked. Which is why even the Grand Prix teams in the struggle for traction and driving stability when it comes to the play of forces such as tensile force, chain hoist and dynamic wheel load shifting in the chassis geometry are occasionally wrong.