The spearhead of the Dunlop hypersport range, Sportsmart is handing over to Sportsmart2 after 3 years of a brilliant career. It was at the factory, but also on the road and on the tracks that we discovered his worthy successor.

The Sportsmart was a true thoroughbred, able to get excellent lap times without weakening under load and to eat for miles with great longevity.. In short, an essential “customer” in the segment, but who had in front of him strong heads and younger recruits, like the Bridgestone S 20, more efficient in the wet, more versatile on the road, but much slower on the dry track. . The all-new Michelin Pilot Power 3, whose efficiency on the track is closer to the Dunlop, with however less endurance in hot conditions, but a very high level behavior in the wet and better versatility on the road. The recent Pirelli Diablo Rosso, too, is the only one capable of competing with the Sportsmart on the clock, but like it, it stands out on the road and does not stand up to the comparison in the wet. Let us not forget either the Continental Sport Attack 2, champion of handling on the road, very efficient on the track, but more lagging behind in the rain. Finally the Sportec M5, a high-level athlete also on the track, but less versatile on the road and in the wet. 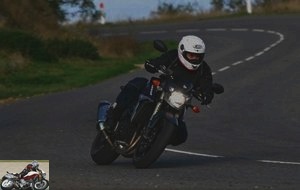 The scene is set and it highlights the margins of progress of Sportsmart. To improve its relative weaknesses, without harming its strong points was squaring the circle and it is to answer that that the Dunlop team created the Sportsmart2 (here pronounced "square") presented as the result of the following equation: 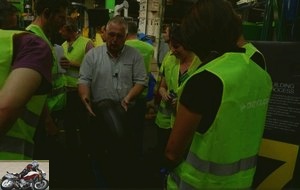 The objective was therefore to improve comfort, handling (especially in cold conditions) and heading, but also to take into account the evolution of the performance of modern machines of 200 horsepower capable of reaching 300 km / h. However, it was necessary to maintain and even improve the potential on dry or wet tracks and the mileage endurance. This is where the technique and experience acquired in competition come in, both in Moto2 and in endurance with the KR 106/108 and the D 212 GP Pro..
Gone is the NTEC technology which allowed “low pressure” running to increase temperature and gain grip. The process was effective, but little used on a hypersport tire. The Sportsmart2, on the other hand, adopts the JLT process, a seamless tread which allows a more precise distribution of the specific mixes to the different zones of the tire. The tread becomes more homogeneous, the transition zones are more gradual and finally the stability at high speed is better. Dunlop of course remains faithful to the JLB process, a seamless tire, which offers an excellent weight / stiffness ratio with less tire deformation and therefore a more stable contact zone, whatever the speed. Of course, gum mixes have also evolved. We note that the rear shoulders are 100% silica, for better grip in the cold and in the wet. When hot, a liquid polymer and tensile resins from the competition take over on the silica, which would otherwise give up. The rimless front tire profile improves angle setting speed and reduces tire response time. Finally, the new “inverted V” designs at the front facilitate water drainage in the rain, increasing the contact surface by 20% at 125 km / h on a surface covered with 3 mm of water. In short, everything is new! What if we put our buttocks on a motorcycle to see if the theory meets the practice? ? 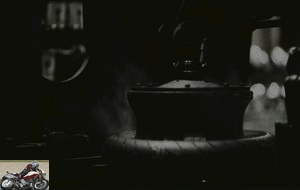 It is on a road circuit of approximately 220 km, with Suzuki GSR 750s that we were able to confront the Sportsmart 1 and 2. Going from one to the other allowed us to better understand the differences and the evolutions. The differences in behavior are nuanced, but with experience, we manage to distinguish blindly and guess what we are riding without looking at the tire. In accordance with the manufacturer’s claims, comfort has indeed improved. The new kid hits less than his ancestor. It is appreciable on a daily basis. It is also more maneuverable and more neutral once on the corner. It lost a bit of the sharp and aggressive side of the 1, making it easier and more affordable, in short, more road. On an overly optimistic corner entry, I could see that it did not straighten up under braking, thus making it possible to keep a good trajectory on the brakes. In short, positive, but let’s see further if this is not to the detriment of behavior on the track or on wet roads. ? 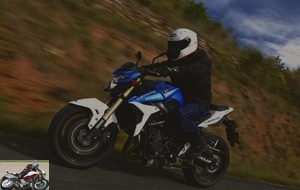 Traditional during a presentation, the "Wet" never leaves you indifferent. Especially me, since I had lost the front and crashed during my last passage … (with a competitor’s tire). Small anxiety, therefore, when putting the wheels on the 1700 m track covered with 5 to 6 mm of water. My colleagues and nevertheless friends, gladly reminding me of this little incident in the course, to give me confidence, it is without boasting that I set off on reconnaissance with a GSR 750 roadway from Sportsmart 1 for 8 laps of the merry-go-round. Over the passages, the anxiety gives way to stress, which gradually decreases, without me falling for all that. I drive carefully, but under tension. Then comes the time to pass the Sportsmart2 and there, from the first few meters, the pressure drops a serious notch. Here again, I remain on my wheels with dignity! The more neutral and more natural behavior frees me and over the laps I grew bolder, on a less tricky track it is true, than during my previous foray a few years earlier. The work carried out on the profile of the front tire, the addition of 100% silica rubber at the rear, the new designs improving drainage are bearing fruit, once again giving the advantage to sportsmart2, in terms of pleasure and ease of piloting. The grip is high, traction is excellent when accelerating and braking behavior too. Good game ! 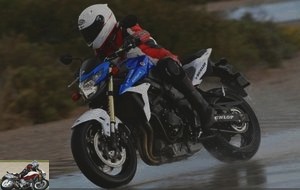 To end this test, we had 4 sessions on the Mireval circuit. A raised track with slow and fast curves, heavy braking and two straights. To measure the benefit of Sportsmart2, we had two Honda CBR 600 RRs and two Yamaha R1s, each with Sportsmart 1 & 2. It is on the handlebars of an R1en Sportsmart 1 that I rediscover the track … and the R1! Let’s admit straight away that these Dunlops fit her well and that despite her 215 kg full weight, I’m surprised by the ease with which she swings in the slow portion of the circuit. After a few warm-up laps, the test of the motorcycle equipped with sportsmart2 allows to appreciate the evolution. Thus, the new tire makes it possible to reach the chord point better. The handling of the bike has won. The stability is also better on the angle, but if necessary, we change course more easily. The newcomer is less selective, more affordable, "rounder" in character, less sharp than its predecessor. We undeniably put the knee on the ground with more ease. 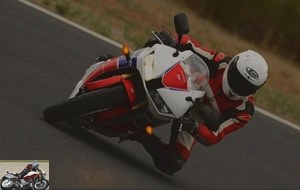 The two sessions in CBR 600 will only confirm this judgment. Already the difference in weight is fundamentally changing the situation. The little 600 twirls, mills, howls, where the R1 towed with force, in any gear. With the sportsmart2, the right / left swing speed becomes much faster, finally giving me the key to the sequence of tight turns that I struggle so much to negotiate. The 7% weight gain at the front (and 8% at the rear) which significantly reduces the gyroscopic effect should not be unrelated. Thanks to the increased liveliness, I dive at the right time with the rope, while I widened my entry way too much. Suddenly things are better. As for the grip, it is really of an excellent level and I admit not having managed to take it in default, at any time. 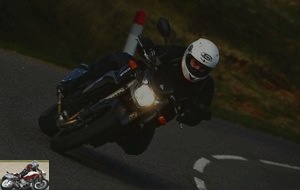 Made in France and cheaper !

Thanks to the use of computer simulations which made it possible to reduce the number of prototypes built and therefore the number of tests carried out, the Sportsmart2 was developed in just 12 months. His predecessor had asked for 18! Moreover, the conjunction of JLT and JLB technologies, resulting from the competition, precisely facilitates the manufacture of prototypes in small numbers, which also reduces development costs. Combined with a weight reduction of 7 and 8%, which means less raw material, Dunlop succeeds in offering us its new tire at a lower price of around 8%, or 250 € for a 120/180 train. X 17, against 270 for the Sportsmart 1 which disappears, quite logically from the catalog. An exploit to be emphasized especially as the new kid, like a very important part of motorcycle tires (Roadsmart 2, TR 91, KR 106 and 108, GP 212 pro, scooter tires, etc …) are made in the French factory in Montluçon. This specificity also reduces transport costs, since the bulk of the market is located in Europe and particularly in France. Good news these days. “Special guest” among our troop of furious journalists, Sebastien, worker at the Montluçon plant and a good biker in his spare time on a GSXR 750 accompanied us. Winner of a draw, he followed us on the road and on the track to represent his colleagues. A really nice initiative, which allowed him to discover the behind the scenes and the superb test complex of Mireval. ‘Seb’ lighthouse call. And congratulations to all for this superb work !

To equip which motorcycle ?

The Sportsmart2 is aimed at sportswomen, even capable of cruising at 300 km / h, who do road and track days, and at roadsters who have a muscular drive. In indicative longevity, we can expect about 5 to 7000 km where a Roadsmart 2 would hold between 8 / 10,000. Note that the Sportsmart AR was already the most enduring of hypersport tires. On the track, the time lapse between Roadsmart 2 and Sportsmart2 is about 2 full seconds on a lap of one minute and a few minutes. Here are some key figures if you hesitate between a Sport GT tire or a hypersport tire for your roadster for example.. 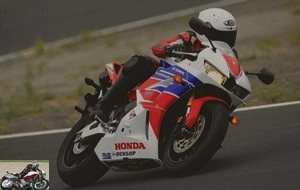