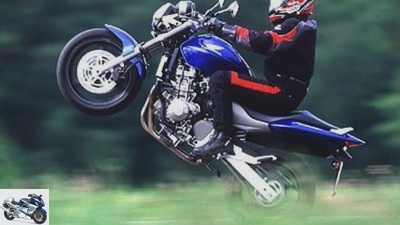 Europe’s top seller 2002. Unfortunately only 25th in Germany. So that Honda has a reason to celebrate here in the future, the little hornet got an update.

This is how MOTORRAD tests high / low beam

MOTORRAD explains the individual criteria of the 1000-point evaluation (part 16).

See and be seen ?? Both are pretty important points for us bikers. To ensure the latter, everyone drives with the lights on during the day. What this achieves only becomes apparent when it gets dark. The priority is of course the brightness of the light cone, whether with high or low beam. But the brightest spot is of little use if it only illuminates the roadway selectively. Equally important are the even distribution of brightness and the illumination of the side edge. All of this is checked by the MOTORRAD testers not only when driving straight ahead, but also when braking, accelerating or cornering. MOTORRAD has scouted a special test route for the light that every test machine drives through: In a narrow valley near Stuttgart, an unlit, partly dead straight, partly curvy slope winds through the dark fir tree, on which all of the above-mentioned aspects can be worked out. Honda has installed a headlight with two reflectors and H11 lamps in the 600 Hornet. A lot of effort with a good, but not outstanding effect, on the test track it was 14 out of 20 points.

In principle, any motorcycle can be throttled. But whether it is actually still fun or just seems tied up is another matter. The throttle orifice solution from Alpha-Technik is convincing on the Hornet 600. Except for the delayed throttle response in the partial load range (see open version), the homogeneous power output across the entire speed range is pleasing. In city use, you hardly notice the missing 63 hp compared to the 97 hp version. Apart from its cheeky appearance, which should suit young bikers, the Hornet has a whole host of other arguments for novice drivers. The fact that the petite 600 is almost the ideal beginner’s machine is due, on the one hand, to the low seat height of just 79 centimeters and its low weight of 202 kilograms when fully fueled, and on the other hand to the way in which it integrates the driver, in fact connects with him This immediately almost intimate contact, which everyone feels when they sit down on the hornet for the first time, creates the trust that beginners in particular find it very difficult to build up in the motorcycle. A trust that Hornet wins across all genders and across all age groups. The good thing about it: it doesn’t disappoint. The Hornet has no unpleasant quirks to get used to. Few bikes are that easy to ride. So handy, so agile and uncomplicated. When ordering the throttle kit, the vehicle identification number must be provided. can be specified. The conversion is subject to registration. Further information is available at www.alphatechnik.de or by calling 08036/300720.

News & Facts Changes in detailReworked cylinder head with narrower ducts for higher flow speedModified ignition mapNew camshaftsEnlarged air filter box with paper elementU-Kat and SLS ?? Euro 2 emissions standard metCooler widened by 20 millimeters Anti-theft device via the ignition lockFully electronic, redesigned cockpitNew tank with recessed, hinged lock and one liter more volumeWide bench with less inclineStreet fighter-emphasized look thanks to smaller, angular indicators, newer styled rear and beveled Convex shape with two H11 lamps, 55 W Low-vibration passenger footrest carrier Tighter chassis tuning thanks to improved damping on the shock absorber and fork as well as progressive fork springs What else was noticeable Preload on the shock absorber only possible after the side cover has been removedStorage under the seat heavily jaggedFoldable luggage hooks under the seat do not seem stable shaped for tank bag Surfing tips for fans www.honda-hornet.de www.hondahornet.co.uk. www.hornet-home.de

The 2003 hornet has the best ability to sting. More pressure, better pulling power, bolder design, an optimized chassis. And a wide range of uses. All at an acceptable price. It remains to be seen whether Honda will manage to seduce the Germans with the Hornet this time. It is incomprehensible that the S version was not modeled.