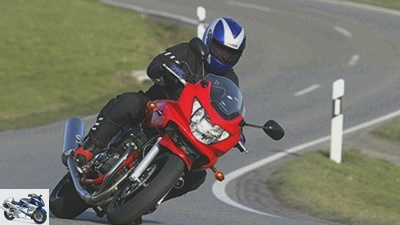 Top test Suzuki Bandit 650 S
The trick with the pressure

The Suzuki Bandit 650 S beats the competition with a fat increase in displacement and a full torque advantage. The renovated classic with sleek half-shell cladding in the top test.

Top test Suzuki Bandit 650 S
The trick with the pressure

Was there anything else?

plus
Main stand with easy operation
and secure footing
Sufficient number of luggage hooks on the
Rear frame
Easy and safe to maneuver
minus
No range adjustment on
Clutch lever
Partly poor screw quality
Cumbersome, difficult to access
Spring base adjustment on the strut

Comments: The front brake requires a lot of manual force, but still achieves good values. Dosage due to the woody pressure point is only sufficient, especially with a cold brake system. The bandit dances off track when braking hard; as soon as the rear wheel lifts, light stamping of the soft fork.

Comments: good handiness and comfortable coordination. The handlebar, which is cranked too far back, is a nuisance when turning it quickly. At the narrow turning point it is very easy to drive and without any wobbly.

Comments: With high steering precision, easy handling and good grip of the
Bridgestone tires onions the bandit through the pylons. Only the side stand that sits down hard forces them off the track.

There is no substitute for displacement.
The old wisdom also applies to the 650 bandit, which scores a lot in terms of pulling power and performance compared to its 600 predecessor. Unfortunately, there are deductions due to the hooked gears, and the cold start behavior is also only worth five points. Well done: gear ratio and overall ratio.

The easiest way is usually the best. Instead of relying on expensive hocus-pocus, Suzuki increased the displacement, specifically revised the technology that has been tried and tested a thousand times over, puts everything on a brilliant pair of tires ?? finished. Incidentally, the bandit remains unmistakably bandit. You don’t really need much more motorcycle for an enjoyable ride.

The torque increase between 6000 and 9000 rpm can be clearly seen on the power / torque diagram and can be experienced in practice. The maximum output remains at nominal due to the tamer control times and smaller valve lifts
78 hp. Small cheating on the edge: the tachometer goes ahead 700 tours at 12000 / min. Even gear ratios and a short overall ratio contribute to the liveliness of the Bandit 650.

Except for small corrections (1 and 2) because of the lifting and then
With the rear wheel dancing out of the track, the braking deceleration is at a high level. With a braking distance of 38.7 meters, the Bandit sets a very good value.

Consistently better than the previous model, as shown by the revised suspension setup in conjunction with the Bridgestone rubbers
Effect. Still something
stand by soft fork springs
unchanged in criticism.

The very short braking distance can
do not hide the fact that the hand strength is too high
and the dosability, especially
with cold brakes, could be improved. The Suzuki masters all other safety-relevant criteria with average to good values. From the morning-
In 2005 it will be available with ABS for an extra charge of around 600 euros.

Long range thanks to the 20 liter tank. Unfortunately, there is no adjustment option on the clutch lever.
The cumbersome screwing for seat and handlebar height adjustment is not fully thought out.

The comfortable sitting position and a
good wind protection is half the battle on long journeys. Even
the pillion gets his money’s worth. A bit annoying: the chirping engine vibrations at high speeds.

The price-performance ratio is right, all other criteria
are rewarded with a good average. Surprising: the good exhaust gas values ​​of the carburettor engine. Not entirely satisfactory:
the processing in detail that
but little impact
the function of the Bandit 650 has.