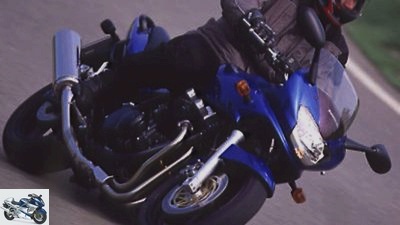 Kawasaki ZR-7S ?? the MOTORRAD editors weren’t exactly expecting the top test hit. But the longer the togetherness lasted, the more the tester and motorcycle came to appreciate each other.

Kawasaki ZR-7S ?? this model name does not stand for fascination-drunk staggering from one driving or technical climax to the next. But for the quiet enjoyment of a thoroughly honest, rock-solid, affordable and versatile motorcycle. Its driving dynamics, especially on winding country roads, should not be underestimated.

The small difference is that there are 16 equally small holes. Big impact: 33 HP less. The holes are in the top of the throttle valve of the 34 HP variant. They ensure that the negative pressure, which pulls the slide upwards via the membranes, is compensated from a certain height. So the slide valves can never release the entire intake cross-section, the engine cannot generate 71 hp. Up to this point of pressure equalization, however? and that is a big advantage of this throttling method ?? the 750 four-cylinder works as if it were open. Rapid acceleration from a low speed is guaranteed, even on narrow, winding roads the lower performance is hardly noticeable. Only when it goes straight for a longer period of time does one begin to miss the lack of performance. Because the maximum torque is reached quite early with the throttling, the engine does not need to be turned higher than 7000 rpm on the tachometer? in fact, that’s always a few revolutions less. Then the next gear has a clean connection Kawasaki ZR-7S has to offer, should be a lot of fun for beginners. Thanks to the exemplary neutrality over the entire usable slope range, it is easy to gain confidence in it even in difficult conditions. Delicately built drivers should, however, be aware that they are getting involved with a 234 kilogram chunk and a seat height of 810 millimeters. No compelling reasons not to choose the Kawa, but better, you know beforehand and can then possibly buy the lower seat, which is available as an accessory.

This is how MOTORRAD tests – ease of maintenance

MOTORRAD explains the individual criteria of the 1000-point evaluation (part 17).

Most drivers have inspections done in the workshop. This leaves the small maintenance activities in between, such as regular greasing of the chain or checking the oil and air. It is precisely these three service points that fall under the maintenance-friendliness criterion. Cardan machines save you work and receive five bonus points as a reward. A toothed belt does not need any lubrication either, which gives it three plus points. Motorcycles with chain drive get a point if the chain can be adjusted quickly and precisely. The oil check is rewarded with a maximum of three points if the oil level can be easily read from a sight glass and the lubricant can be refilled through a sufficiently large, easily accessible opening without tools or dismantling the casing. Two points are awarded for a simple check of the tire air pressure. If both valves are difficult to reach with the usual petrol station devices, there is no point. In the best case scenario, a cardan machine can collect ten points, a motorcycle with a toothed belt eight and a chain-driven machine six. Of these six points, the Kawasaki ZR-7S managed to get five. The chain is easy to adjust, the oil level can be easily checked thanks to the sight glass, only the tire valves could be a little more accessible.