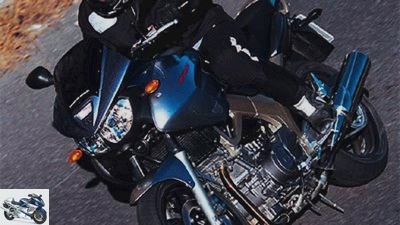 Yamaha’s jack-of-all-trades TDM is already attracting all-round clients in its third edition. And thanks to the aluminum frame, injection and G-Kat, it shines with an attractive portfolio. You can give her the contract without hesitation?

What else caught my eye

MOTORCYCLE measured valuesBraking and driving dynamicsBraking distance from 100 km / h 39.7 m Average deceleration 9.7 m / s² Comments: Sensitively adjustable, powerful brakes at the front and rear. No tendency to stop, but isolated brake stamping at the front with a tendency to block at the end of the measurement. Remarks Effective and easily adjustable front and rear wheel brakes, fork dips quickly and far, whereby the feeling for the blocking limit is somewhat lost. Handling course I. (fast slalom) Best lap time 20.9 secVmax at the measuring point 102.3 km / h Comments: The TDM can be maneuvered through the pylons with little steering force and reaches a relatively high speed. Annoying: the soft fork when braking into the tight turning point and the load change jerk. Handling-Parcours II. (Slow slalom) Best lap time 28.7 secVmax at the measuring point 56.2 km / h Comments: Here, too, the TDM 900 speeds with ease and good steering precision through the S-curves. The Metzeler ME Z4 »J« tires provide enough grip with a clear slip limit, notches, side stands and mufflers touch down. Orbit 0 46 meters, best lap time 11.1 secVmax at measuring point 50, 6 km / h Comments: Sufficient inclination freedom and cornering stability for touring demands, only the jerky load changes disturb the softly tuned fork, which also dilutes the feeling for the sliding limit at the front.

The 900 has become a real TDM again. Easy to use, handy, economical, clean and equipped with a great brake. There is still a need for action in terms of load changes, chassis tuning and the somewhat passive seating position