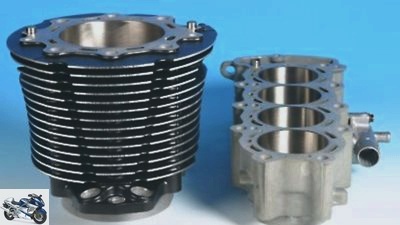 Worlds collide when a sports engine is supposed to tease out top performance from a minimal displacement, while a cruiser engine can draw its power from maximum volume. MOTORRAD shows what it looks like inside two completely different representatives.

Stammtisch slogans don’t always hit the mark, but sometimes they hit the spot. MOTORCYCLE explained,
what applies to motorcycle engines and where the
Popular opinion is wrong.

Bikers agree on one thing:
What matters is what comes out at the back. But there is a lot of confusion about how the propulsion comes about. A typical example:
Power and torque have nothing to do with each other
Totally wrong. Both are even directly linked to each other, namely
about the speed. The associated formula is M = 9549 x P / n (M in Nm, P in kW, n in 1 / min). At a
at a certain speed this always results with the same power
same torque, regardless of the engine type, number of cylinders or other factors. A designer can only teach a motor a certain performance characteristic, the torque curve then results automatically.
Four cylinders are not elastic
You have to differentiate between the measured values ​​and the subjective experience. From a metrological point of view, the performance-optimized multi-cylinders are not only on a par with the one or two-cylinder, they are superior. Because the torque of four-cylinder engines is at least as great in the lower speed range, in the upper range it is superior to that of two-cylinder engines with comparable displacement. Which brings us to the next misjudgment:
Single cylinders have the best
Draft
A subjective impression of the single-
Pilot who has absolutely nothing to do with reality. Unfortunately, you have to put it so hard: Big singles only seem so powerful to the drivers because they are
acoustically and vibrationally suggest more »punch«.
Single and twin cylinders are less easy to turn
At least when you look at it
Refers to the total displacement. A 1000cc four-cylinder is basically made up of four 250cc units. The engine can turn just as high,
as the mechanical components of the individual single cylinder allow. In the two-cylinder with one
Liters of total displacement, the individual displacement is logically 500 cm3, and that does not create such high speeds. The maximum speed is
in the case of large individual cubic capacities, in addition to the mechanics, also by the
Restricted gas exchange. Huge cylinders are naturally more difficult to fill, and it also runs
Combustion does not decrease so favorably because of the limited flame speed. A multi-cylinder is one
As a result, single-cylinder cylinders of the same displacement are fundamentally superior.
A lot of speed requires little mass
The highest speeds can only be achieved with light engine parts. The mechanical limit is mainly set by the moving masses.
In addition to the crankshaft drive, which would at some point disassemble itself due to the high inertia forces, the valve drive is crucial. Above a certain speed, the valves can no longer follow the cam profiles, then there is an unhealthy rattle, and then collapse. Therefore everything is done to keep the oscillating masses small. You need light valves, which is why 40 percent lighter titanium has recently been used instead of steel. On the other hand, a good filling requires a lot of valve area. It therefore makes sense to distribute the area over several valves. Four- or five-valve engines are more speed-resistant than comparable two-valve engines.
Letting it spin is unhealthy
Only partially true. Before ten,
Twenty years ago the engines were not so well developed in terms of materials and construction, at that time more feeling was required from the driver. Especially since previously none
Limiter put a stop to wild speed orgies. Today, high speeds hardly damage the engines. On the other hand, low speeds and high torque can put enormous strain on the innards of the engine as well as the entire drive train. If the speed drops below a certain level, if the chain whips and hits, the transmission makes unhealthy noises. To make matters worse, the oil supply and cooling work less effectively at low speed.
High speeds require strong dimensions
On the contrary: a lot of torque
puts the greatest strain on the entire mechanics of the drive train. Then
at low speeds, the torque curve is due to the large
The time intervals between the work cycles are more irregular, for the tips
The gearbox and clutch in particular must be dimensioned strongly. One wonders how small the clutch is on a Formula 1 engine that develops 900 hp at 18,000 rpm.
A linear increase in performance works best
Exactly the other way round: A torque hole often means that the increase is felt all the more spectacular afterwards. Example: An Aprilia RSV mille treats itself to a slack in the middle area and lays it on top
the V2 with power. When accelerating, the subjective perception becomes less due to absolute values
shaped, but rather by the increase in performance. A motorcycle with a linear performance curve initially looks less spectacular, even if it always has more power everywhere.
The draft miracle
Pulling definitely has something to do with the torque curve, nothing works without power in the basement. When accelerating from low speeds, however, another, very crucial component has an impact: the gear ratio. Large displacement
Naked bikes, for example, are not geared towards high top speed, because nobody drives 250 km / h without a fairing. The last gear can be translated accordingly briefly. That in turn increases the speed level in all gears, the motorcycle not only looks more dynamic, it actually accelerates better with a comparable torque curve? because more speed or more power is available. MOTORRAD determines torque values ​​in the last gear from 60 km / h. A Vmax turns at least 2400 rpm, while the crankshaft of a long-geared GSX 1400 only rotates at 1800 rpm and thus has significantly worse cards in a direct comparison.