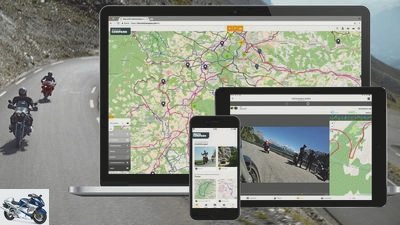 Motocompano is a navigation app for Apple, Android and Windows devices that can also be used to plan tours. With version 3.0, the developer of the app has given some new functions.

The Motocompano platform, which can be accessed in Android, iOS and via the browser, offers the possibility of planning tours, archiving them and sharing them with friends and other motorcyclists – including videos of the routes. Motocompano is not a completely new development. The application has been available for download in popular app stores for a long time and has been updated regularly since it was first published. A new version of the app is now available. With the update to Motocompano 3.0, users who own an Apple device can look forward to some new functions.

Update only for the iOS app initially

With version 2.3 of Motocompano released at the end of 2019, numerous new features have already been integrated: Among other things, the offline maps have been updated. In addition, since version 2.3, curvy routes can be planned for free and without limits. With version 3.0 more new functions are added. However, for the time being only owners of Apple devices will be able to enjoy the latest Motocompano version – it is highly likely that the Android app will be updated in the near future.

Users who have already used older versions of Motocompano should notice fairly quickly that adjustments have been made to the design of the iOS app. According to the developer, the interface has been greatly optimized thanks to the latest update. The planning of routes is now made easier by inserting and moving waypoints using drag and drop. In the previous version, new waypoints were added to a route by entering the address or by long tapping on the map and then sorted manually. In the new version, newly added route points are automatically sorted into the appropriate place. Waypoints can be moved afterwards using drag and drop, which, according to the developer, should make the configuration of the route much easier.

Anyone looking for an interactive tour planner for motorcyclists could be very happy with Motocompano. The features of the new version promise meaningful improvements in user-friendliness and the creation of new tours – for the time being, however, only for owners of the iOS app.