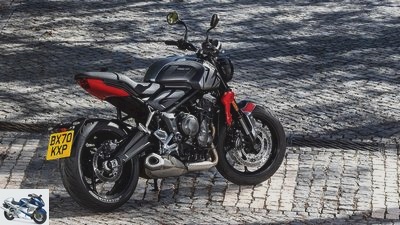 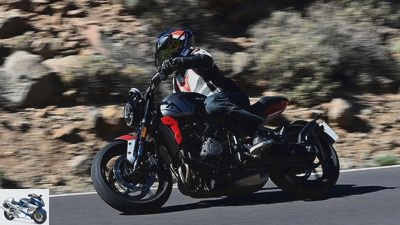 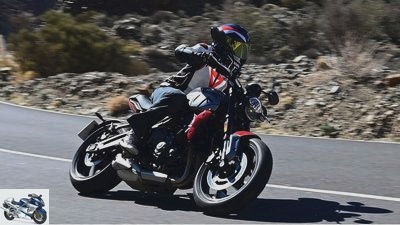 1/10
With the extremely coherent roadster, Triumph could take off in the high-volume segment. At least that is what the initial contact promises.

2/10
Even in the stand, the Trident conveys a quality that the competition must worry about.

5/10
The handling and driving behavior of the Volks-Triple are completely convincing.

6/10
The Trident steers in a neutral, stable but flexible manner and knows neither tilt nor pumping.

7/10
Taken together, the Trident has the potential to meet advanced demands.

8/10
Although the vibrations increase noticeably after a powerful start and just as much in the middle in the last third of the speed, his sustained revving, the stamina, please. In any case, there were no complaints about poor performance even among the performance-spoiled – some would say – performance-spoiled press representatives.

9/10
The Trident has the significantly more comprehensive equipment ahead of the entire competitive environment, as it currently appears. 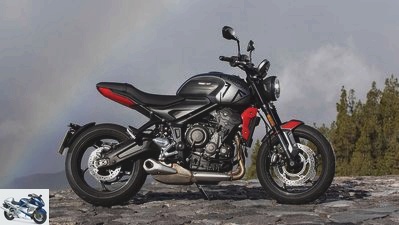 10/10
Lower middle class? Swipe “lower” and “medium”, what remains is the conclusion.

A breath of fresh air in the middle class – a hackneyed phrase, but also appropriate in the case of the Trident 660. Because with the 81 PS strong, 7,343 euros cheap and extremely coherent roadster, Hinckley could fully take off in the volume segment. At least that is what the initial contact promises.

Triumph’s new mid-range roadster represents a wonderful counterpoint to a past season marked by superlatives. The one that was eagerly awaited takes away from expensive superlatives Triumph Trident 660 Distance to place a Union Jack between the Yamaha MT 07, Suzuki SV 650, Kawasaki Z 650 and Honda CB 650 R instead. Most refreshing, indeed. Triumph has a new entry-level model in an extremely important segment, and the same is its first three-cylinder. 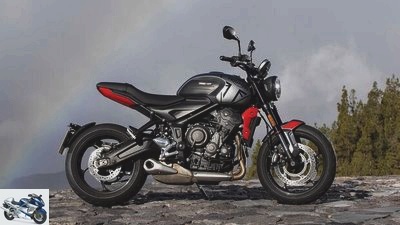 Key data? 81 PS, 64 Newton meters, 189 kilos ready to drive and 7,343 euros are named. If we exclude the four-cylinder Honda as a somewhat more expensive, somewhat stronger special case, these are values ​​close to or slightly above the twin competition. Target group? As is well known, motorcycles speak of “lower middle class” (the term was seldom more inappropriate) to a young audience, beginners (A2 version available), returnees and people who are looking for something uncomplicated for every day. In addition, and in addition to the pleasantly low weight despite the tubular steel frame, the low seat height of 805 millimeters fits exactly as the overall very compact appearance of the Trident. She leans friendly on the side stand, seems approachable. And valuable, almost noble. Even in the stand, the Trident conveys a quality that the competition must worry about. This also masters clean workmanship, but such a clear design language, such an adult, well-sorted, yes, dignified appearance is something new in the class. Highlights and features: Showa upside-down fork, stylish TFT round instrument, classic round headlights (LED light all around), a butted handlebar, the well-known tank cap with the Triumph logo is also there. Quite a lot, measured by the purchase price. If you are looking, of course, you will find corners where cost pressure can be determined (tip: start with the gear lever and foot brake lever), but the Trident’s appearance is really impressive. The fact that it is being built in Thailand is only worth mentioning in that the Thailand triumphs in terms of workmanship have so far fully met the high standard of the Hinckley machines. 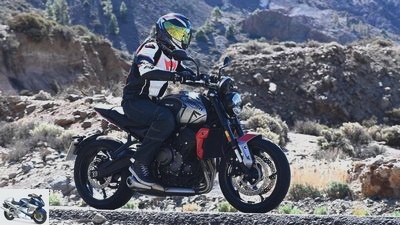 From appearance to ride. As usual in its class, the Trident is placed in an upright and comfortable position. At 1.72 meters, we feel perfectly integrated and dare to predict that most people between 1.60 and 1.80 meters will feel the same way. The bench looks high-quality upholstered, the knee is comfortable, everything is where it should be. Ignition – with triumphs a moment’s waiting time goes by – then the 660 triple growls. Incidentally, its roots do not lie with the Street Triple, but with the Daytona. However, because of a longer-stroke design, a different crankshaft, and new innards, one can confidently speak of a new development. This three-cylinder triple also has the typical smoky note, sounds present but unobtrusive. 94 dB is entered as standing noise.

Easy to use, great to use

An engine that, with its moderate design, will bring a lot of joy in everyday small and small: smooth clutch, soft throttle response, jerk-free acceleration from the lowest speed, so we trundled from village to village towards Teide in the southwest of the volcanic island of Tenerife. Quite explicitly: the Trident is a very easy-to-use motorcycle thanks to its very linear power delivery. Now also with the new, fairly easy-to-read TFT display, because instead of the somewhat fiddly joystick, a new solution with a 4-way button is used and it works perfectly together with a detoxified menu structure.

On the other hand, the wonderful turns, narrow and wide, in which the extremely grippy asphalt on Tenerife screws up the Teide – and which the Trident follows in a remarkably relaxed and competent manner, are by no means everyday. In short, the handling and driving behavior of the Volks-Triple are completely convincing. The motorcycle looks light and splendidly balanced, which, in combination with the broadband three-cylinder, results in great rideability. Two turns and we’re old buddies. No capers, lots of driving fun. The Trident steers in a neutral, stable but flexible manner and knows neither tilt nor pumping. In terms of price, the quality of the Showa chassis is particularly surprising. As is usual in the environment, only the spring base at the rear can be adjusted, but the response and damping are barely realistic. The comfort is correspondingly good. Kudos for it, as well as for the high-quality Michelin Road 5 and the fixed Nissin double disc brake. 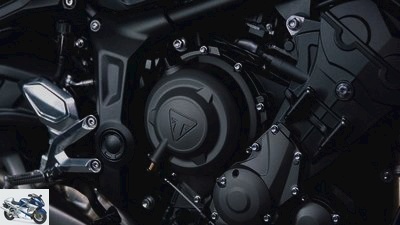 Taken together, the Trident has the potential to meet advanced demands. This fits what the engine can still do with increasing speed, if perhaps the mood is on fire. Although the vibrations increase noticeably after a powerful start and just as much in the middle in the last third of the speed, his sustained revving, the endurance, please. In any case, there were no complaints about poor performance even among the performance-spoiled – some would say – performance-spoiled press representatives. On the contrary, one had the impression that everyone was having a lot of fun using the strength that was there. Will the Trident take the motor crown in its segment? Well, at this point, Yamaha in particular will raise objections with the MT-07. The comparison will be exciting.

However, the Trident has the significantly more extensive equipment ahead of the entire competitive environment, as it currently appears. There are two driving modes as standard, as well as a traction control that is linked to it and can be switched off – a novelty in this class. Under the prevailing conditions, however, the TC could not be lured out of reserve while driving, but in the less meaningful gravel test it regulated cleanly. After all, Triumph has an extensive list of optional accessories: Quickshifter with blipper, for example, heated grips, connectivity, these points are also exceptional for the class.

… cheap, but far too underperforming.

The new Triumph Trident with its high-quality design and the three-cylinder full of character is an absolute asset to the affordable segment, handling and functionality reach a high level. But above all, it reminded us of what you can do with 81 hp. Lower middle class? Swipe “lower” and “medium”, what remains is the conclusion.