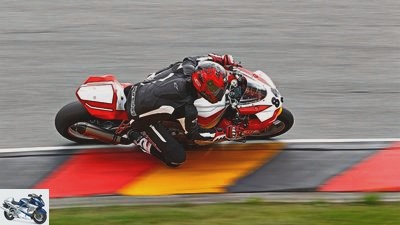 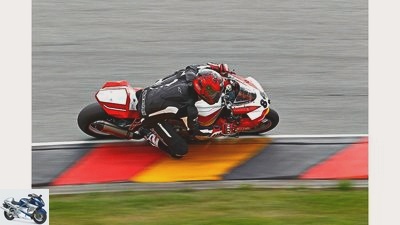 1/8
Even larger-displacement motorcycles mostly only saw the GSX-R 750 from TTSL Rennsporttechnik from behind. 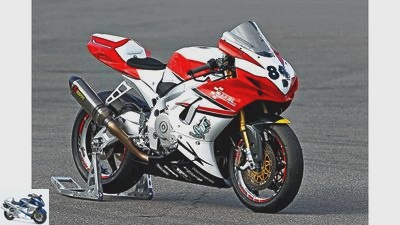 2/8
Even if it can’t keep up with the brute thousands in terms of top performance, the GSX-R collects a lot of plus points with its accuracy and handiness at the entrance to the curve. 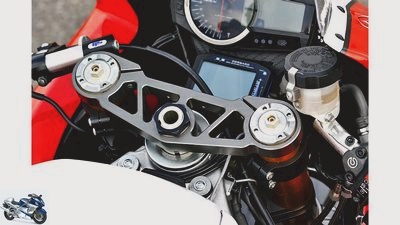 3/8
The milled fork bridge is a proprietary design. 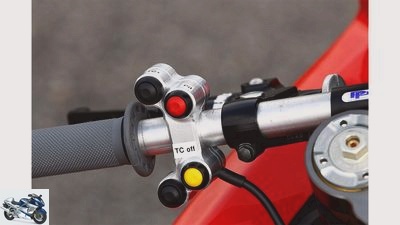 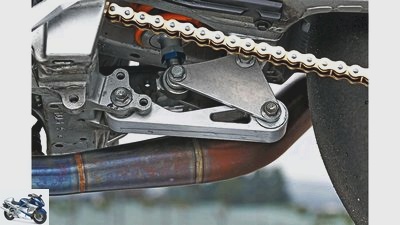 5/8
The progression had to be reduced for the diversion.
That means a higher spring rate and full compression damping. 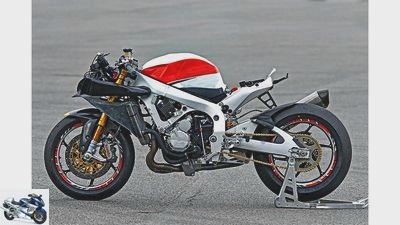 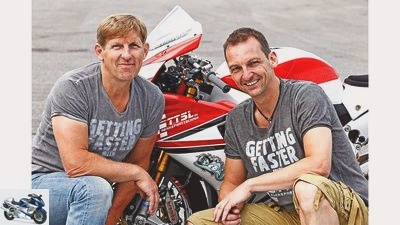 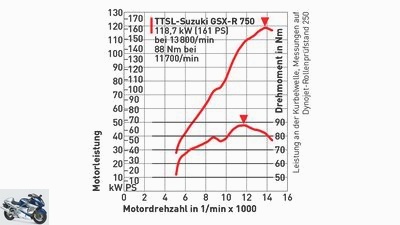 8/8
The row four turns rapidly upwards and runs into the limiter at just under 14,000 rpm. However, more than 10,000 / min should be available for an attack.

Performance is everything. But only at the regulars’ table, as this Suzuki GSX-R 750 from TTSL shows at the PS-TunerGP 2015 at the Sachsenring.

There has probably never been a Suzuki GSX-R 750 on our planet that fulfilled the promised output of 150 hp from the factory. The duo Rainer Tschauder and Franz Lesl from TTSL can help. Over the years, the two have had a few three-quarter Gixxers under their wing and on top of that also look after a driver in the GSX-R 750 Challenge. “To ensure that this motorcycle doesn’t actually exist on the market, we fix quite a few of the things,” says Rainer as we sit in the PS box at the Sachsenring and talk about the machine. “Many say a thousand will kill me, I would like something that is more drivable and works nicely. That’s exactly what we’ll take care of. “

To begin with the Suzuki’s performance deficit GSX-R 750 There are three possible points of contact to fix it: mount an accessory exhaust and racing manifold, then tune the engine properly. With regard to the TTSL machine, both cases are Slovenian goods from Akrapovic. A PC5 with autotune was used for tuning and the original ECU was rewritten. So you get at least 140 hp first. If the camshafts are machined and hand applied to the compression, the test stand finally spits out 150 horses.

Almost everything is series, but not in its original condition

Everything that should go beyond this in terms of performance requires more complex combustion chamber processing. The TTSL-Suzuki GSX-R 750 pushes 161 HP at 13,800 rpm on the roll and claims the position of the second lightest machine in the area of ​​this year’s TunerGP with 166.6 kilos. According to TTSL, there are more than 300 hours of working time in the project. For example, hardly anything on the cylinder head was left untouched. Nevertheless, almost all engine parts of the inline four correspond to the series, but almost none of them are in their original condition. The individual components have been meticulously coordinated and revised for the benefit of performance. The valves have a higher preload and the connecting rods have been adjusted. The piston skirts have been shortened for less weight and better ventilation.

For the valve train and the camshaft profiles, the tuners tried out different variants and decided on the best-working combination. Tornado sanded the camshafts for more lift and longer intake and exhaust times. The TTSL-Suzuki GSX-R 750 rotates 900 rpm higher than a production model, for which valve tops and valve wedges had to be designed. Last but not least, it is about the ventilation of the engine, which is done via a drilled out throttle valve housing with specially made valves and funnels. The specially adapted cladding supplies more air, which has improved cooling by an average of four degrees.

Rainer is an avowed supporter of the two-stroke era, which is why he equipped the slipper clutch from TSS with modified springs for as little braking force as possible on the rear wheel. The 750er therefore noticeably pushes into the curves, which a trainee of the four-stroke culture does not necessarily understand immediately. Nonetheless, the TTSL-Suzuki GSX-R 750 is one of the types of machine with which you can drive fast lap times without a long period of getting used to it.

Hello my pretty, do you want to heroically plow through the field out there together? Nothing better than that! You feel well housed on the TTSL-Suzuki GSX-R 750, as all instruments are in the right place at the workplace. Due to the relatively wide handlebar stubs from PP Tuning with 28 millimeters offset, it is easy to steer the motorcycle on the targeted line in an inclined position. In addition, the Gilles footpegs are easy to grip and offer a good grip. TTSL’s own racing seat positions the driver quite high and rock hard, which has a positive effect on the feedback.

Braking maneuvers get to the point

Coming from a brute thousand, the TTSL three-quarter Gixxer seems less powerful on the home straight despite its extensive engine tuning. The advantage is that the machine gives the pilot more time to think and the brain can sometimes completely keep up with the acceleration. At the corner entrance the TTSL-Suzuki GSX-R 750 collects a lot of plus points with its accuracy and at the corner exit with its handiness. It is not uncommon for you to take significantly tighter turns with the 750 and accelerate earlier than with a superbike. The same game often takes place in a rowdy group: wait relaxed, watch the opponent carefully and then pull past at the right moment, which can also happen on the brakes. With the Brembo M4 calipers, Brembo radial pump, Brembo HP discs (5.5 mm) and pads from Vesrah, braking maneuvers are spot on. For the chassis, the tuners opted for a TTX-GP shock absorber from Ohlins at the rear. In the fork is a closed cartridge, also made of Swedish gold. In addition, the fork was coated with TiN.

The taut setup at the front and rear is particularly noticeable. Although Rainer Tschauder has already won several amateur races with his bike, Arne Tode has tougher criticism in store. “The chassis works too little, and in proportion to the manual force, the brake could get a little more down,” is the assessment of the ex-Moto2 rider. Rainer then takes some damper oil out of the fork and adjusts the rebound and compression stages. With the result that the TTSL-Suzuki GSX-R 750 is fuller and the feedback is higher.

Be that as it may: The author can hardly suppress a satisfied laugh when he thinks of the larger-displacement motorcycles that the TTSL-Suzuki GSX-R 750 mainly saw from behind today. None of you out there would have felt any different. 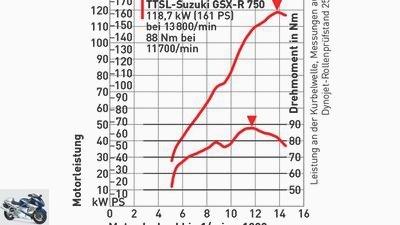 The row four turns rapidly upwards and runs into the limiter at just under 14,000 rpm. However, more than 10,000 / min should be available for an attack. 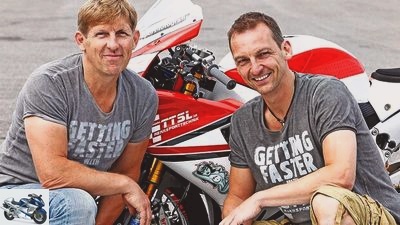