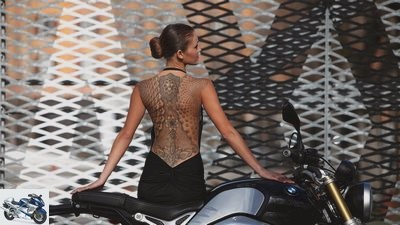 Tattooed Iranians must first take the psychological test before they can be admitted to the driving test.

Tattoos are not banned in Iran, but the people clearly feel that the moral police do not approve of the body decoration. “Tattoos are a kind of self-harm. And people who do something like that may suffer from mental disorders, ”a police spokesman told the state news agency IRNA. The reason makes body art a disease.

Western fashion is making its way

The official justification hides the Iranian government’s assumption that tattoos are a Western fashion that allegedly could infiltrate Iranian culture and endanger Islamic values. In fact, tattoos are becoming increasingly popular among young Iranians. This could also be due to prominent role models such as the captain of the Iranian national soccer team, who would have been suspended if the Iranian moral police had their way. Ashkan Dejagah, who is currently playing at Nottingham Forest, therefore also played in long-sleeved jerseys at times.

Women and motorcycles in Iran

Another driving license issue in Iran is women and motorcycles. There is no law that prohibits women from using any vehicle. Nevertheless, women are not allowed to drive a motorcycle in Iran because the traffic police refuse to issue the appropriate driver’s licenses. An Iranian woman therefore filed a complaint with the administrative court. The court ruled in their favor, as reported in the Farsi edition of Deutsche Welle (www.dw.com/fa-ir). In its ruling, the administrative judiciary emphasizes that it is imperative that women are allowed to drive motorcycles and scooters and emphasizes the increasing traffic and the fact that not all sections of the population can afford a car.

The police authority has appealed against the judgment of the administrative court. As long as it is not clear whether the appeal will be allowed – and if so, how the verdict will turn out – no motorcycle driving licenses for women will be issued in Iran. Mainly because the police stated on their official website that the court ruling should be viewed as a case-by-case decision.

“We shouldn’t be surprised if a woman drives a motorcycle”

Mohammad Kazemi, a Malaysian MP and vice chairman of the Parliament’s Legal and Judiciary Commission, said in an interview with the People’s News Agency that the High Administrative Court’s ruling is effective and that he supports it: “The ban on motorcycling for women has no legal basis like the cycling ban “. Our women have rights that are respected in the law, and we cannot interpret the law arbitrarily and to the detriment of them. We should respect and uphold the law and not be surprised when a woman rides a motorcycle or bicycle. “

Soraya Sharqi, Director General of the Tehran Ministry of Women, welcomes the judgment of the Ministry of Justice and points to the positive environmental and transport effects. “The Iranian women’s motorcycle is like the Saudi women’s car that was once taboo and has now been eliminated. Currently, many cars drive around the city with just one person, and if the use of the motorcycle is cultivated it will also help improve urban traffic.

With a headscarf under the helmet

As a foreign woman who comes with an (international) motorcycle license and a motorcycle, this is something different, as Margot Flugel-Anhalt shows in her soon to be released motorcycle travel film (from 12 September in the cinema). The 64-year-old drove 18,000 kilometers with her 125cc Honda from Hesse to the Chinese border and back again. Among other things, she also drove through Iran and as a German motorcyclist had no problems with it.

Body painting or not – as long as no tattoo is visible, for example on the forearm, there will be no psychological test for the driver’s license applicants. The same applies to women who ride motorcycles, some of whom are in Iran. They drive them to work every day – with short hair under their helmets and the appropriate clothing they do not attract attention as female drivers.