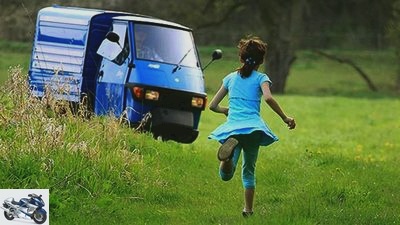 With Piaggio Ape 50 through the Waldecker Land

Of one who went out to learn to fear. On the move at the lowest end of the performance scale, on the edge of modern traffic. A trip with the Ape 50 scooter tricycle ensures intensive social contacts, the world becomes huge, and at the end the ride on a cannonball is waiting. 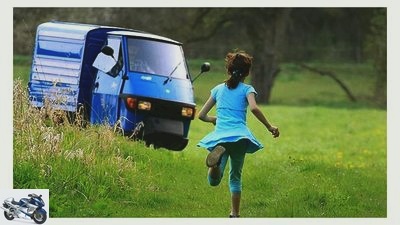 Eleni likes Apes, Lea is racing with the blue box, and Markus is enjoying the trip to another world .

Lea is eight years old. A girl with no weakness for heavy fire chairs. But when the cute, blue Ape is standing in front of her, she spontaneously wants to go along. It’s the same for everyone we meet on the way. In Kassel, Zierenberg, Wolf-hagen, Bad Arolsen and Diemelstadt they build up when the Ape stops. Want to talk, come out as fans of motorcycles, cars, trucks, tractors, locomotives, airplanes. The 50 cubic ape has a charm that other mobility and transport concepts can be jealous of. Because she can do so much with so little. Deficiency becomes added value here. Pure experience, not through luxury, but through reduction. When was the last time your cheeks glowed with enthusiasm??

Don’t worry, now there is no sermon of renunciation, but a story from life. We want to know what it feels like to be on the road in a vehicle that comes from the border landscapes of the motorcycle world. A vehicle without performance, luxury, safety. A mobile that was and is a vital tool for millions of Italian and Asian suppliers, farmers and craftsmen.

The three-wheeled ape from Piaggio is the world’s most successful attempt to maximize the utility and payload of a scooter, so it belongs to the motorcycle cosmos and thus justifies its existence in MOTORRAD. Since 1948, the various versions of the Ape, conceived by Enrico Piaggio and the aircraft engineer Corradino dAscanio, have been the backbone of the Italian economic boom and still determine the traffic situation to this day. It has even spread over large areas of the Asian continent; large contingents are now produced in India. Even in Germany, the small one is developing “bee” in various cubic capacity classes for a cult vehicle.

Wherever it appears, it touches the heart. Roman’s, for example. For his 60th birthday, the lifelong motorcyclist treated himself to a Harley Softail. We meet him among other bikers in Bad Arolsen at the ice cream parlor. The owners of the heavy machines are jealous of the maneuverability of the Ape, which has to meander through the narrowest streets laden in its country of origin. Then 15-year-old Eleni joins them. She is used to nimble handling, rushes finger-ready over the keyboard of her iPhone and chauffeurs a 50cc Kymco scooter. For a few minutes on the handlebars of the Ape, she even puts down her Apple fetish. Nobody else can do that. The kids who are used to automatic gearshifts are no longer used to manual gearshifts, and the pupil finds it difficult to change gears. Claudia, in her early 40s, doesn’t find it easy either. The hobby gardener has long been considering getting an Ape for extended gardening work.

But the Piaggio tricycle not only transports material loads, but also wishes. Lea longs for an ice cream, and that’s why we have to conquer the Arolser Berg as quickly as possible, coming from the village of Kulte. It felt like a 20 percent incline. At the top we are in first gear and still have 10 km / h on the speedometer. Still faster than a donkey. Lea counts the cars in the rearview mirror. Nobody gets upset, everyone smiles as they overtake. The ape enchants. Turns introverted limousine drivers into communication miracles, and ruthless rascals into tame lambs. Greet oncoming motorcyclists. If that’s not proof that the ape is part of their world.

On the way back, the small two-stroke sings a very healthy sounding song at maximum speed. Downhill the speedometer needle moves in regions beyond imagination. We feel like we’re flying. Lea screams the speed at me, excited like a soccer reporter just before the goal falls. 45, 50, 55, 57 km / h. 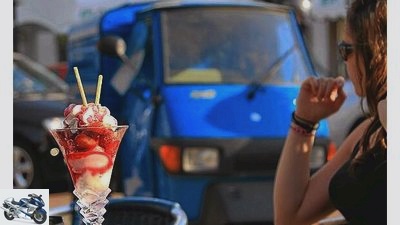 A great feeling of freedom. Now a clean line is required, steering commands should be given extremely sparingly. At this grueling pace, instinct and clairvoyance are required. The Ape cannot brake hard with its small drums.

Back in Kulte, farmer Wagner allows us to transport the feed for his cows from the silo to the stable. When loaded uphill, the bee can hardly accelerate, every shifting dune is faster. Now the second course. Pull the clutch and turn the left wrist down with the selector handle, whereby the neutral position must be overcome. Let the clutch come, add gas, ignore tendinitis. Millions of Vespa drivers know the procedure. To feel the anachronistic mechanics and to operate them smoothly makes thieving joy.

Barely in fourth gear on the farm road, the stables appear. So again, full commitment to the brake lever and pedal. We have to maneuver backwards towards the trough. Pull back the coupling and a black metal rod that protrudes from the cabin floor. Now rest “la marcia indietro” one, and the Ape has four reverse gears. After four days with the blue one, we enjoy the jolt of acceleration after changing gears, the chassis, which is not all that uncomfortable considering the mini wheelbase and the small cogs, the speed in corners that was hardly thought possible and above all the extreme willingness to change direction. My colleague Schroder, who is experienced in Ape, claims that a kart is sluggish against it. He also thinks he knows the real reason for the consistently loud conversations of Italian families: because the Ape’s cabin is rattling and booming. He should know, after all, he’s married to a Sicilian.

Everything is relative. Volume and speed too. We deliver a load of wine from Herbsen to Kulte. We are not deaf yet, we do not miss anything in the completely barren cockpit. The speedometer is great entertainment, our bees are getting faster and faster, we feel like full road users. Especially when we tackle the 50 kilometers from Kulte back to Kassel. Of course, small paths are more fun, but here it also has to be wider streets. We make ourselves very small, stay on the far right. Even the police turn a blind eye. You can feel the gust of wind from the 40-tonner through the thin sheet metal, and sometimes the door pops open when cornering. Then it rains, the windshield wiper doesn’t really work, so Lea sticks her arm out of the vent window and operates it manually. You can guess why the ape has become a myth. We imagine how the proper Italian mom and the Capofamiglia shared this small cabin and suddenly feel the immeasurable space behind the handlebars.

We will miss you ape. And you have to recognize: It is good to ground yourself from time to time, to set standards and frames of reference. When I came across a “only” 50 HP strong Honda climb, I don’t trust my senses. It’s a ride on a cannonball! 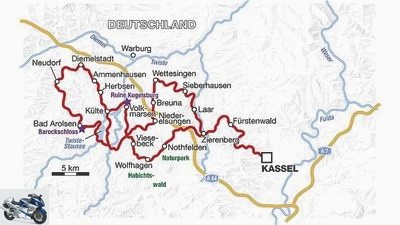 The map of the area around Kassel.

The area around Kassel, especially the Waldecker Land to the west, is an insider tip for motorcyclists. The wide, hilly landscape, the finest bends and picturesque half-timbered villages with their rustic people ensure pure travel enjoyment. There is no question that this secluded area also suited the Italian scooter tricycle. 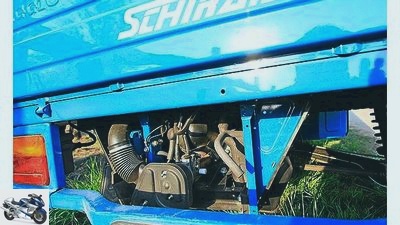 Special modifications at the APE dealer in Kassel

We got our Ape from the company Schira from Kassel, one of the largest Piaggio Ape dealers in Germany. The unconventional scooter and 125cc motorcycle shop on Hollandische Strabe 236 also represents Yamaha in addition to Piaggio and has specialized in Ape conversions as a second mainstay. Ape as a mobile espresso bar, Ape as a mobile beer or wine bar, Ape as a snack bar, ice cream parlor – there is little that cannot be done on an Ape basis.

The conversions are precisely crafted in the attached workshop, and there is also a paint shop on the premises. Uwe Schutze, managing director of Schira, took a lot of time for information, instruction and service, we say thank you! All information: www.schira.de. By the way: A lively Ape-50 tuning scene is flourishing in Italy, the mostly young members of which are supplied with parts by the Italian manufacturer Polini. Is there for scooters with appraisals from Schira.