Imagined by Sam Tanegashima, an engineer as brilliant as he was obstinate, his project called "N600" was undertaken in 1968. The idea was to design a flagship 750cc model with four cylinders with dual overhead camshafts. It seems that everything was planned for a launch in 1969, but Honda presented just before to the whole world its CB 750…. the unlucky project manager therefore got back to work. 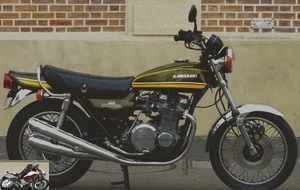 The plan was to ignore an informal agreement between Japanese manufacturers, suggesting a maximum displacement of around 750 cc, the maximum airspace allowed for Japanese motorcyclists. Thus was drawn a 1000 "Madame Plus", to spit a hundred horses. Finally, for reliability reasons, the team will validate the 903 that will equip the Z1. "Z" is the last letter of the alphabet, "1" is the very first number. In any case, the unexpected braking of Honda will have made it possible to observe the enthusiasm of bikers for this type of machine and Kawasaki to force-feed the boiler in order to sculpt a masterful response..

Thus, the first proto was completed in May 71, soon joined by three other copies, tested from every angle by mercenaries of the handlebars, such as Gary Nixon and Paul Smart, fine blades of circuits and undisputed adjusters. The efforts made will lead to the very first 900 Z1, first shown in Canada, then exhibited in Europe at the Cologne 1972. French bikers will discover it in September of that year and will have to pay 14,500 francs (around of 12,000 constant euros), to afford it. 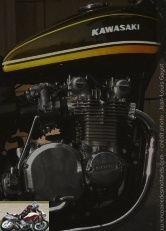 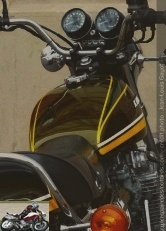 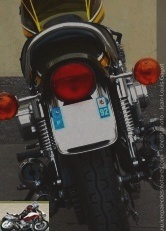 From the outset, the biker planet will swoon over the tires of this fury and for good reason…. , more torque, top speed and higher acceleration, avant-garde technological tricks and some new hardware gadgets …. 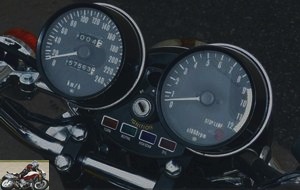 Majestic and all in chrome, this is undoubtedly a magnificent motorcycle. This sobriety in perfect elegance has won over two generations of aesthetes. Only good taste, with some hidden refinements, such as its emission control system or the valves treated to withstand unleaded gasoline. Rather rare technological orientations at the time of its release …. 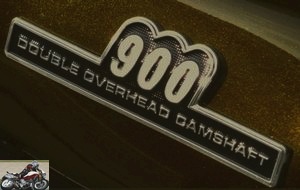 No worries about the buttocks, the wide and comfortable saddle comes to the rescue of rough suspensions. You quickly feel very conquered on the handlebars of a 900 Kawa, the bike is high enough and the arms wide open to grip the wide handlebars. The melody sung by the four pots would almost suffice for the happiness of riding such a machine …. 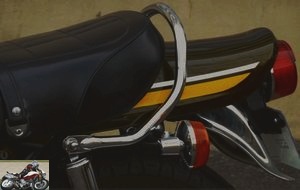 In the cityscape, things get a bit sour. The Z1 is rather clumsy, hardly manoeuvrable and heavy like a dead donkey. Standing maneuvers require excellent biceps…. As for convolutions in traffic jams, nothing encouraging, the Kawa, decidedly, prefers wide open spaces …. 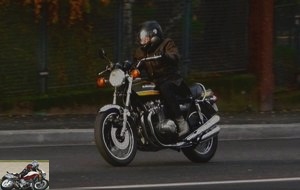 Its amazing engine allowing lightning accelerations, the Z1 plays “jump-cars” from the slightest rotation of the throttle. On bumpy and winding departmental roads, between the harshness of the suspensions, weak braking and its tendency to overweight, it is better to approach the bends with caution …. 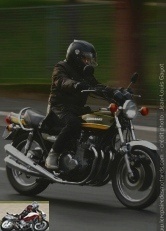 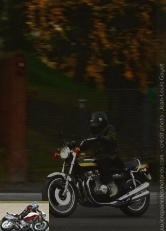 Heading allows you to tease passable speeds today to train your pilot in the galleys for about ten years, however in large curves the beauty is agitated vigorously from the rump. In addition, the position of the arms crossed and torso forward does not ensure optimal driving comfort over 150 km / h …. 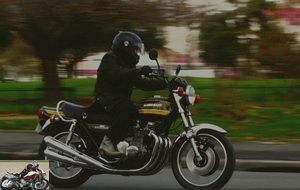 No behavioral change compared to solo; as for the transported, he will appreciate the large and soft saddle as well as the support bar.

Nothing exceptional in this area, especially if the model only has one disc in the front. The rear drum lining wear indicator is quite welcome. 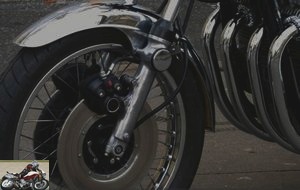 At a reasonable pace, the big Kawa swallows only seven liters per hundred kilometers. The whipped carcass can reach nine liters of unleaded 95 or 98. 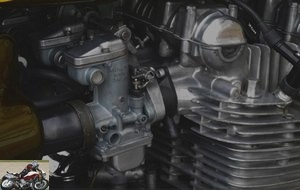 Unlike Honda with its Four hastily released in 1969, Kawasaki took the time to design a reliable and proven motorcycle. Apart from regular maintenance and an attentive ear as on all machines of this age, the 900 Z is a carefree motorcycle..

There are still a few points to watch out for, such as oil seepage from the engine crankcases or the tension of the timing chain. Lifting the oil from the crankcase is frequent when cornering and a 20W50 mineral engine oil is recommended. Prolonged use of the electric starter must be avoided, otherwise the freewheel will be destroyed. Finally, the hiss of the disc brake up front is harmless. Kawasaki Z engines are known to be reliable, and it is in competition that this model will shine the most with many successes in endurance.. 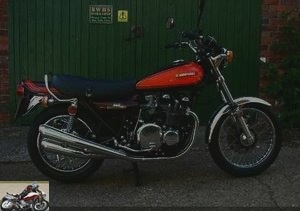 1974 : Type Z1A. Brown / orange and green / yellow colors. Aluminum finish engine, redesigned decors. The order of the lights on the instrument panel is different and a brake light indicator is added in the tachometer as well as a rear brake lining wear indicator. 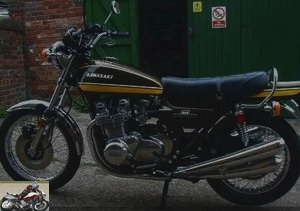 1975 : Type Z1B. Blue or red with new decoration and larger side cover monograms. The secondary transmission chain is lubricated by a separate oil pump. The fuel tap is colored aluminum instead of black and the carburetors are modified for reasons of emission standards. 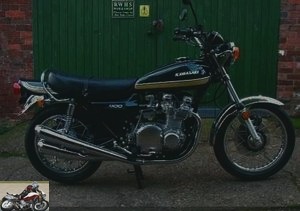 1976 : Type Z900A4. Dark green and metallic brown colors with new decoration, side covers and different monograms (Z900). Many modifications were made to this latest model including a new saddle, a new air filter, a double front brake disc, a keyed fuel tank cap, a new three-fuse harness, hazard lights with Sound repeater for indicators and smaller carburetors with a diameter of 26 mm. The secondary reduction is longer and the tubes of the frame are thicker. 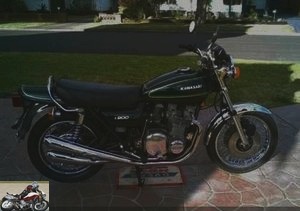 Obviously the prices are soaring. Indeed, the Z is negotiated at the same price as in 1973, unfortunately more in francs, but in euros, for a model restored to the rules of the art it is therefore usually necessary to pay € 15,000 …..

Finding a complete, genuine 900 Z barn at the right price becomes very difficult. Caution recommends avoiding incomplete, tampered with motorcycles in poor condition where restoration to the original configuration will prove complicated, expensive, even utopian. Until 76 and its disappearance from the catalog, the Z will live its life like the motorcycles of the 70s, often grafted on useless accessories, or decked out in a four in one, thus amputated of its magnificent quarteron of chrome pots. It has become difficult to find one complete and in its own juice today. Fortunately, restoration remains very possible, the majority of parts being findable, as with any mythical machine. The bike of this test dates from 1974 and after total repair, we completely rediscover the sensations distilled in the past…. 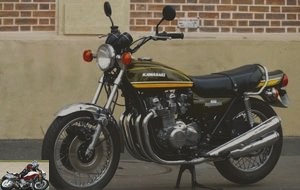 The breath of its engine still seems surprisingly vigorous. Ideal for the ride, straddling between its legs more than forty years of history is enough to bristle under the Barbour. And above all, absolute, pure beauty, the perfect balance between cheeky young lady and established bourgeois. Its plastic still catches the eye of the whitewashed under the helmet, but appeals just as much to the bikers of the last downpour. All are approaching the beautiful and want to own the same. Proof that the 900 Z Kawasaki more than deserves its nickname of Eternal ….