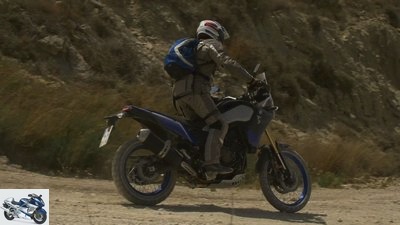 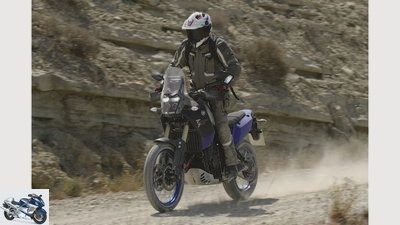 1/10
Finally! We were allowed to try out the new Yamaha Tenere for the first time. 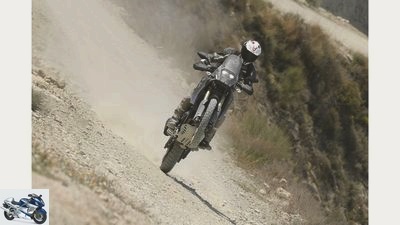 2/10
And in the first test, the new travel enduro confirmed the first good impressions. 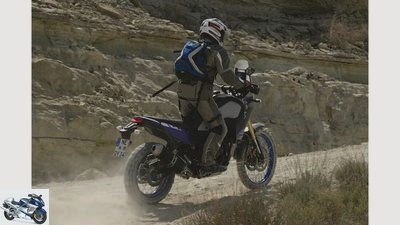 3/10
It convinced us both off-road and on the road. 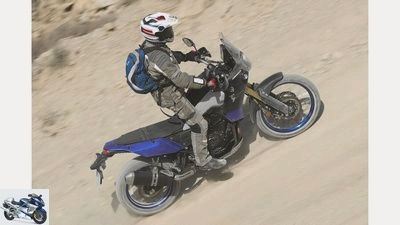 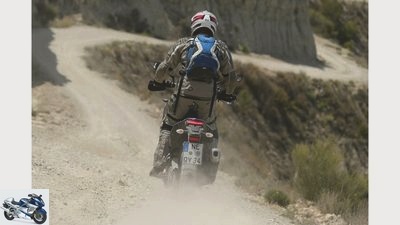 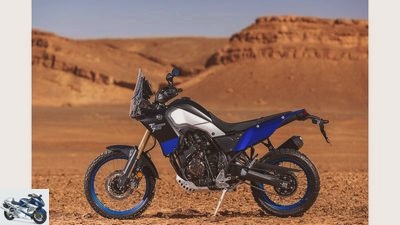 6/10
The engine has been revised in the right places compared to the MT-07. 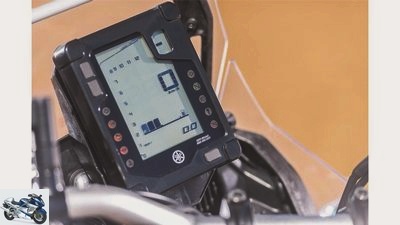 7/10
The display is reduced to the essentials. 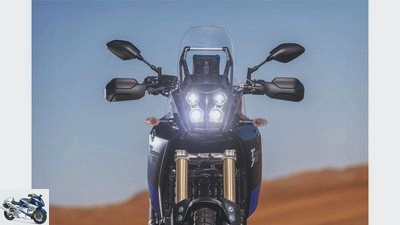 8/10
The wind protection could be better especially for tall pilots. 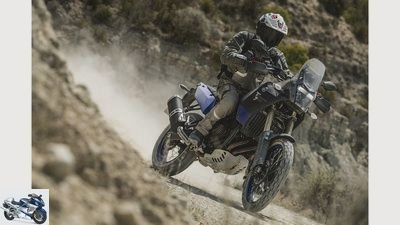 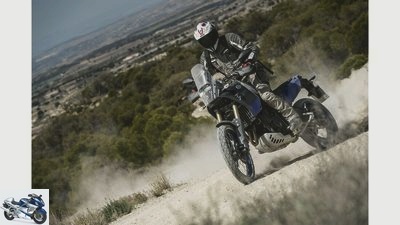 Yamaha Tenere 700 in the driving report

The new Yamaha Tenere 700 is finally here and it stirs up a lot of dust. It’s not as good as expected. She is even better. You can read here why it was worth the wait and still worth it.

“The paper wasn’t completely white when the idea became concrete in 2015,” says project manager Takushiro Shiraishi. He is a wise man around forty with a lot of experience and a constant smile on his face. “Our CP2 engine with 675 cubic meters was already on the paper. We wanted to develop the new Tenere around him. This engine is very compact, but also damn high, which made things difficult. “The demands on the development team and the management of the legendary myth were enormous. Terms such as “sporty, strong, pure, light” and, ultimately, “cheap” were in the specifications and were sometimes even contrary. The 700 series should be a motorcycle that is not only suitable for everyday use, but also shines on and off-road. After two days and 500 kilometers unwound, almost half of it off-road, you know why Shiraishi-san is smiling. He did this almost impossible feat and got it all under one roof. Shiraishi and his team have created a motorcycle that sets new standards in the Tenere legend and costs only 9,299 euros.

Yamaha specifies a seat height of 875 millimeters. Thanks to the slim waist, drivers who are only 165 centimeters tall feel just safe. The first reason for the supposed safety is obvious, you can already feel it when maneuvering: 204 kilograms with a full tank. If you unscrew the pillion pegs and swap the standard stainless steel silencer for the slip-on silencer from Acrapovic, which is already available, you get 199 kilos of fuel. That is a hundredweight less than a BMW 1250 GS weighs. 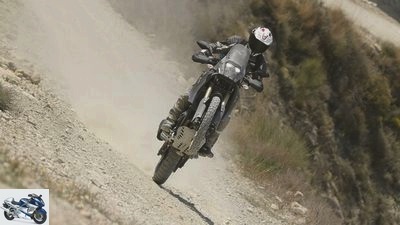 From the very first few meters, you have the feeling that the Yamaha guys have pumped ten bar of air onto the front tire, the steering behavior is so direct, resistance-free and easy. This is not only due to the mounted and very handy Pirelli Scorpion Rally STR. At 63 degrees, the steering head angle is quite steep, but in conjunction with a long aluminum swing arm, the 700 should still run stably in a straight line. This is also supported by the relatively long wheelbase of 1,595 millimeters. Let us surprise. It goes through the city in accordance with the rules. Almost everyone wonders at the first stop at traffic lights how many gears they have to shift down. The 675 cubic and 74 hp twin is so high-torque and a bit shorter than in the MT-07 that you can find yourself in fifth gear at 50 km / h. When the city disappears in the rearview mirror, the engine is allowed to be fed properly for the first time.

The engine is convincing

Attentive MOTORRAD readers already know what a small miracle this twin is with a 270 degree crank pin offset on the crankshaft. For use in the Tenere, it was given even more torque in the lower and middle third of the engine speed. It is mechanically identical to the MT and XSR drives. It generates its better torque curve through a modified injection map in conjunction with longer manifold pipes and a different silencer. How does that feel? Fed up. Self-assured. Never boring. All Tenere fans who are still dreaming of the return of the single-cylinder touring bike should better wake up. This twin is the better single. It accelerates powerfully from the bends, pulsates pleasantly and feels sporty and agile, but at the same time has a calming effect. It never encourages you to lawn. But if the oats bite, they will not disappoint. In short: He’s a damn good travel companion, best buddy and sports partner in one package. 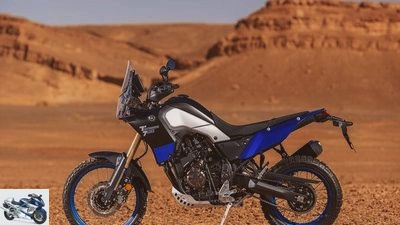 In the first test, the new Yamaha was convincing.

At 140 km / h in the sixth, the engine turns 6,000, at 100 km / h it is around 4,000 tours. Strollers will take the last gear at the end of the village, maybe one day switch back on narrow mountain passes. Why? Because they can. Sporty pilots are happy about the crisp gear ratio and the revving of the little twin.

Reduced to the essentials

The first stage leads over wide roads with wide sweeping curves and you have enough time to get closer to the soul of this bike. In times of “higher, faster, further”, the Tenere is a real revelation. There’s no bling-bling, no frills or chi-chi here. One display. Reduced. A driving mode. Enough. An ABS. Can be switched off. No traction control. Does not matter. The Yamaha guys have implemented the mission “keep it simple” excellently. Thankfully, without neglecting important things: frame beams are screwed on for better maintenance, air filter and battery can be reached in a few simple steps, brake and gear levers can be folded, hand lever guards and luggage attachment options are mandatory. Conventional gas Bowden cables instead of electronic frippery. Valve clearance check every 40,000 kilometers. 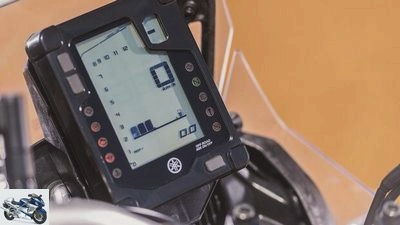 The display is reduced to the essentials.

At some point the time has come. The tour guide leads his proteges on a gravel path. One still believes in a short detour. The truth is: The 21-inch front and the 18-inch rear won’t roll on asphalt that day. Now it’s time to get out of the saddle, put your feet in the pegs and ride while standing. Anyone who has always wanted to feel like the Dakar stars will get more than a foretaste of it here. Because the ergonomics fit perfectly, the display is protected behind the raised glass in the rally look and the most important thing is done by the right hand: It replaces the non-existent traction control, gives commands for the rear breaking out and picks up the cart at 120 km / h Rear wheel, when you’re casually rushing through a bump again. The good news in all of this: the bike always tells you what it’s doing. Regardless of whether the rear wheel breaks, the tire spins, the cart plows over large stones or through longitudinal grooves – the feedback is always excellent. This is not only due to the spring elements or the sitting or standing position, but also to the new frame, which has absolutely nothing to do with the MT-07. The brakes also work perfectly so that the overall package is homogeneous. Brembo calipers are mounted opposite the MT-07, they are less biting, but at least as effective. The 700 remains controllable in every situation, does not overwhelm anyone, does almost everything and is even partially beginner-friendly – provided you are tall enough.

When the head of development Shiraishi-San smiles and collects the ignition keys at the end of the two days and asks about the advantages and disadvantages of his bike, it is all the easier to find compliments. And all the more difficult to find hairs in the soup. But they do exist: the standard handguards are poor and could be more stable. The cockpit vibrates heavily in off-road use. The wind protection could be better for tall people. And according to the factory, the range with the 16-liter tank is “only” between 350 and 400 km. That is less than what their single-cylinder predecessors achieved with the huge tanks. 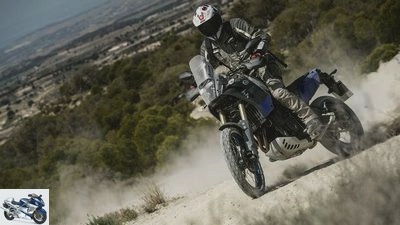 According to the manufacturer, it has a range of 350 to 400 kilometers.

The biggest downer, however, is likely to be the rather late delivery of the new Tenere. The first 2,000 units for Europe will be delivered in July. Due to a shutdown at MBK in France, where the machines are assembled, the next batch will not roll into the shop windows until September. This is a pity. But for all those who order too late, rest assured: the wait is worth it.

While Ducati is probably already working on the V4 Multistrada and people in Munich are perhaps thinking about a 1400 cubic GS, Yamaha has decided against the arms race with the Tenere. The 700 is simple, robust, light, inexpensive and combines on- and off-road suitability with a sovereignty that one did not expect. The Yamaha Tenere 700 not only follows in the footsteps of its own legend, it enlarges it. hats off!