In the XMax family, I ask … the father! Declination of the TMax in smaller, the XMax is especially the father or the big brother of the XMax 125. Same name, same size, same exterior look, not easy to distinguish the two models for the uninformed and even for the warned. So, white hat and white hat? Test ! 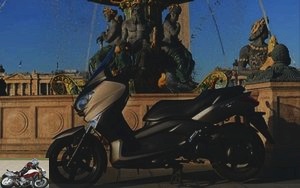 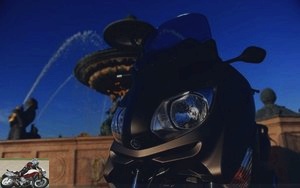 From a distance, but also up close, nothing distinguishes the 250 from the 125, not even a logo or a distinctive sign displaying the engine capacity. The colors themselves are identical: white, black or titanium … the latter color being particularly qualitative. In both cases, we therefore find an aggressive look at the front which extends to the rear with a double tapered LED rear light. The long saddle with colored stitching ends with a mini Yamaha aluminum plate on the back of the most beautiful effect. A perfect finish that we find from the stern to the bow. 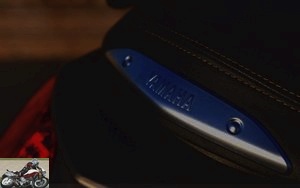 We note the side stand and the central stand, very useful because of the lack of parking brake. As for the scooter, it is easily and effortlessly placed on the control unit, especially since the rear handle is well placed.. 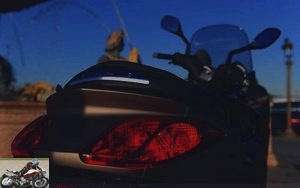 The dashboard is sporty with a double dial surrounded by aluminum housing the speedometer on the one hand and tachometer on the other. In the center, a digital display allows you to benefit from a precise fuel gauge, a clock, a partial double trip, a totalizer and a reserve indicator as well as the engine temperature. Everything is very readable, even in full sun, while the background lights up orange at nightfall. The handy warning is easily and naturally on the right stalk. 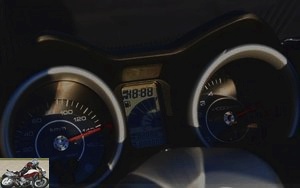 For the 1.70 rider, the feet barely touch the ground despite a saddle only 792 mm high but wide. In fact, we get into the habit of sticking out only one foot, while the other remains on the floor. That said, the weight placed low, allows not to be hampered by this relative height, including when a passenger climbs behind.

The maxi-scooter snorts with a dull, rewarding noise. One turn of the right grip and the XMax 250 shoots off briskly as the tachometer needle jumps to 7,000 rpm. Lively, sporty, we are far from the winded 125 which struggled to start. We find fishing and vigor, specific to larger engines and the 250 is much better than twice as good as a small 125. It offers from the first moments a real pleasure, especially as the engine is smoother. , is less rough than the 125 and more pleasant in daily behavior. And yet, the power difference is low between the two models, going only from 11 to 15 Kw! But the torque almost doubles him, going from 11 to 21 Nm. ! 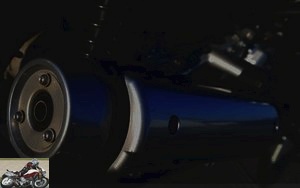 The feet are then placed either flat on the floor or forward; the scooter offering several possible positions.

Lively, fast, and with a light weight despite its 180 kilos (7 kilos more than the 125), the maxi-scooter does as well as its little brother 125 in traffic, slipping into a pocket square and allowing a simple and fast interfile. A gas stroke and here we go again, casually, to get out of a somewhat difficult situation. The engine also offers – especially compared to the 125 – a pleasant smoothness in everyday life. We feel the more power available more immediately and a general engine approval that makes you forget the relative "small" displacement. The braking is largely up to the inclinations of the machine, offering power, feeling and responsiveness, from the first moments. Suddenly, we find ourselves braking later, and taking the brakes hard or on the contrary gently and just obtain the desired braking, in complete safety. It is difficult here to bring into play the ABS, which is discreet in use, unless you only take the rear brake and arrive on a manhole cover. 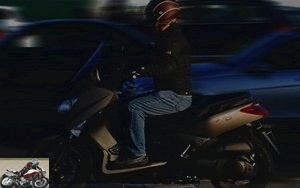 The XMax 250 sets off with vigor on the highway while the tachometer and the counter climbs … up to 142 km / h and 8,000 rpm, close to the red zone. We are then at a little over 130 km / h real while it is possible to nibble a few more precious kilometers hours depending on the incline. But in general, the Xmax can be maintained at this speed, even in the event of prolonged false flat, allowing suddenly peri-urban journeys, unlike its little brother. At this speed, it offers the same and excellent stability offered by the 125. Whether the road deteriorates noticeably or the curves widen, the scooter remains in line, without any sway, offering a very appreciable feeling of safety, including in duo.

At this speed, the bubble does not generate any particular turbulence in the helmet and the legs are rather well protected despite a central beam which means that you have to have your feet on both sides..

Back on departmental roads, the XMax finds its marks, especially since it always offers more than acceptable times beyond 90 km / h, and while it only runs at 5,000 rpm, a cruising speed which reaches it perfectly, almost identical between 70 and 90 km / h. It is necessary to turn the right handle at this speed to make climb the needle to more than 7,000 rpm before lowering it appreciably while it stabilizes at 110 km / h and 6,000 rpm. Here again, the small single-cylinder turns round and smooth. It really has to exceed 6,500 rpm to start to perceive its vibrations and be a rougher.

At this rate, the turns follow one another with ease and naturalness, without the need to force. The scooter tilts naturally and even allows you to enter quickly in certain turns by registering in a particularly neutral way in the curve. Here again, it is possible to rectify the trajectory in an improvised way without this generating parasitic behavior. The mini maxi-scoot never balks and naturally adapts to the behavior of its pilot which it helps to always pass a little faster.. 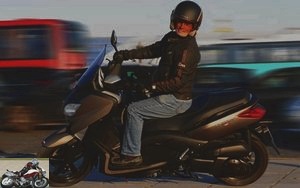 At night, the X-Max provides bright, powerful lighting, allowing you to drive at full speed.

Feeling, power and dosage are the three key words for braking the XMax, which offers precision and efficiency, largely up to the expectations of the machine. Easy to learn, it does not surprise at any time, allowing the starting point of braking to be delayed a little more over the course of its use. It is then enough to take the brake a little harder to brake even shorter, and always in complete safety. If you take only the rear, you can feel the scooter sit on itself and land until it stops. You only have to take the front brake strongly to begin to feel a lift-off and a slight forward dive … which you never feel in normal use, especially in combined use. ABS is a treat, hardly ever coming into action and just right when it is needed. 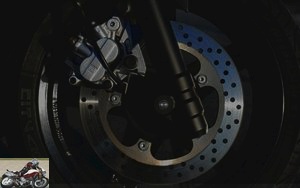 With a heavier engine of seven kilos, packing more suspensions (identical to the 125), the XMax 250 is a little more comfortable than the 125, without reaching the level of comfort offered by the TMax. We could think of a happy medium, but you should not rush it too much on rough roads that it still makes you feel.

As a duo, the XMax is barely less swift, still continuing to offer more than respectable momentum and pick-up if it is not as dynamic as it is on its own. The long saddle offers a good seat and the ideally placed handles allow two trips without worries.
Only the passenger footrests are a little close to the pilot and can allow the latter to feel the passenger’s feet in his calves. 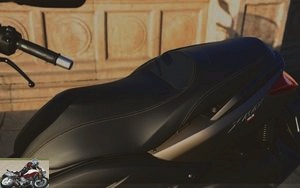 Like the 125, the trunk of the XMax allows to accommodate two full-face helmets, even among these two helmets a large modular. And there is still room … for a small computer, a rain suit and an anti-theft device or even a little more by packing well. We just regret the absence of internal light in the trunk, very useful in the evening when looking for your things..

There is a fairly large lockable storage compartment at the front, offering a good capacity to store papers, mobile, keys, pocket book and other weight in the pockets. A 12V socket would have been welcome to recharge.

The fuel gauge is precise, decrementing its indicator by a stick every 40 kilometers on average. The Xmax does not begin to flash the reserve until after 250 kilometers, while there is still enough to do a good fifty kilometers. With an 11.8-liter tank and an average consumption of 3.6 liters per hundred, it thus allows an average range of 320 kilometers. It does consume a liter more per cent than the 125, but the additional driving pleasure is such that this excess consumption is fully justified. Refueling is done easily via a hatch in the center of the scooter and a key cap which is easily detached and then reclipsed very easily. 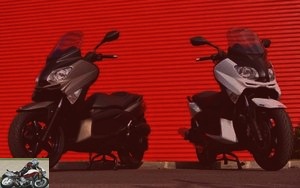 As much as the 125 can disappoint a biker accustomed to a more demonstrative engine, the XMax 250 offers everything one could need in town and even in peri-urban use. With a top speed that can be used daily on the motorway without being overtaken, it also offers the speed, dynamics, storage and the possibilities of duo necessary, including to consider a weekend in the countryside. Barely more expensive than the 125 of the same brand (5.099 € against 4.199 € for the 125 but 4799 € in promotion) it represents more than an alternative to the 125, a real possible choice for those who do not want to put double the budget in a TMax, moreover more envied in terms of flight. In short, it is the almost ideal compromise for a two-wheeler more than utility, practical and with a nice look, usable in town and elsewhere on a daily basis..

The technical sheet of the XMax 250