Far from the arms race, Yamaha is declining its custom segment down in terms of displacement with the XV 950 Bolt…. with both simplicity and a real personality, thus going beyond another variation of the XVS 950 with which it shares the same 942 cm3 engine. We therefore find the V-twin at 60 ° SOHC air-cooled, 4 valves per cylinder…. and a line that is reminiscent of a certain Sportster 883. What to walk around? Test…. 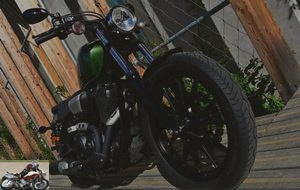 Fashion is back to basics: those of the 60s and stripped down, bare motorcycles, going for the essentials with 2 wheels, handlebars, a minimalist saddle but a real engine full of sensations. No cartography, no electronics galore here (in the standard non-R version, there is no ABS), but just proven. And the Bolt promises it with its maximum torque of 8.1 mkg (79.5 Nm) reached at only 3,000 rpm. 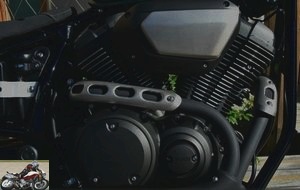 No flashiness either with very few chrome, but a large use of black. In its R-Spec version, we admire the imitation leather saddle with its stitching of the most beautiful effect as well as shock absorbers with auxiliary reservoir. 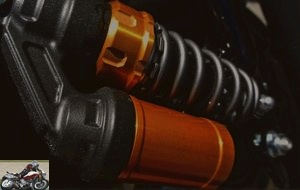 We then note the final belt transmission. 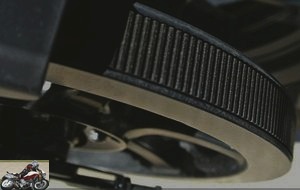 The finish is up to the habits of the tuning fork: excellent craftsmanship, including in details, such as the aluminum bar that keeps the battery in place. 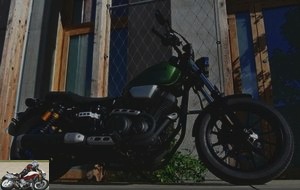 With a minimalist height of just 691 mm, the smallest young woman will put her feet on the ground and without any heels. In front of the eyes – almost in front of the eyes, the saddle is so low and the handlebars high in comparison, the minimalist speedometer has simply kept the display of the speed, the double trip and the totalizer … but with a little prank in the face of production guns with modern, digital form and only liquid crystals. The advantage is undeniable in terms of readability, including or even especially under the sun.. 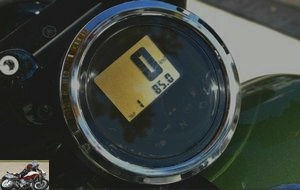 The hands then hook up to the wide handlebars and its thick handles: arms stretched forward, almost horizontal. The feet lengthen as for them appreciably forward while the knees go up slightly. And speaking of the knee, the one on the right is hampered by the air box, which leads to a noticeably spreading of the legs. The large mirrors provide excellent vision. The kickstand falls easily under the foot, both to be unfolded and folded. 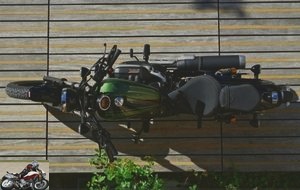 Tradition requires, the key is housed on the right side of the frame … Here, you will also have to lean over the tank to reach the switch. Note also, that the steering lock is independent of the switch elsewhere. So turning the key is not enough to block the steering. The VTwin snorts deeply distilling its vibrations and a relatively discreet sound, especially for the category. "Good Vibes" here we are ! 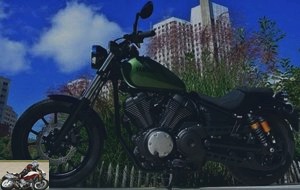 First, it takes off, quickly and in a healthy way. One would have expected a less dynamic behavior with the only small 52.1 horses. But start-ups are far from sluggish. Then, even at low speed, the weight placed low makes it possible to envisage the slower maneuvers without any problem, except possibly a short stop of the direction causing a relatively long turning radius. However, with its slim size for a custom and its lightness, the Bolt sneaks around without difficulty, passing without thinking between the rear-view mirrors of the cars. Second, it grows from the first laps and the pace in town alternates between second and third with big tremors on the first 1000 rev / min. In fact, it is possible to cruiser in the last gear at 40 km / h, even 30 km / h even if there, it is heavily under-revving. They put Milwaukee in the engine. On the other side the first climbs quietly up to 70 km / h, already too fast in town. That said, the vibrations and the screaming engine generally make the second go by from 40 km / h; whereas at 50 km / h you don’t even think about staying on this regime anymore. In all cases, the Bolt accepts to cruiser on a trickle of gas and without any jerk, offering a very appreciable driving comfort in town. Obviously, we find the big guns of the custom and the first roundabouts will make you hear that it rubs…. even if the same size, the Bolt rubs less than other models in the same category. But it rubs and both on the right and on the left, possibly especially surprising your possible passenger…. Thank you the footrest support… 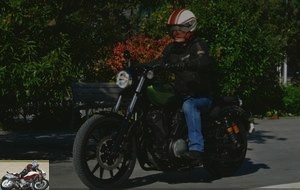 Arms forward, they stretch past 140 km / h. However the handling is irreproachable even if the pilot very quickly "flag". However, the engine still keeps a little under the hood and its 52 horsepower and can possibly exceed 150 km / h (odometer), even if in fact, you will not do it, if only for keep your license. Exceeding this last speed is in any case more personal masochism than efficiency, especially as consumption climbs significantly. It is a custom, a real one and here wants to prove it at any time … by returning in particular quickly on the small departmental roads. 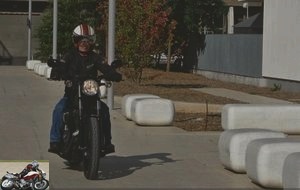 The Bolt therefore returns to departmental with delight capable of rolling over all gears…. especially when the second is mounted on the switch at 105 km / h. In fact, you will happily be on the last two reports, or even the last report, to appreciate the scenery. You will also appreciate the soft gearbox that you can forget about and the torque that allows you to rewind quietly without changing gears. If the pace picks up, the reduced ground clearance will make you slow down noticeably anyway.. 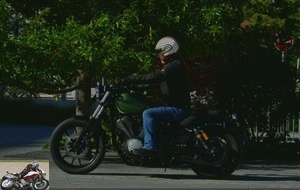 The brakes were almost reversed on the model. Because if the rear brake is very effective, going as far as locking the rear (thank you ABS), the front seems to be a simple retarder. Here you have to take the lever with all your hand and all your strength to extract a reaction tending to offer braking, not to mention that the grip is rather soft, without being spongy however. So do not hesitate to really brake with the front and rear in a combined way and there, you can really brake. It must be said that the front and rear use the same simple and unique 298mm disc brake.. 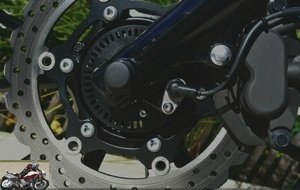 The saddle – very aesthetic with its imitation leather look and visible stitching – is placed on the frame. Certainly, it would seem that there are two shock absorbers, very short on the sides; especially since the R have cylinder shock absorbers unlike the standard model. But they are mainly there for decoration and offer only limited effectiveness on a daily basis; at the same level in fact as some American counterparts. As for the passenger, with a mini folding seat, he is even less well off. It is therefore necessary to choose roads with almost perfect asphalt to appreciate the relative comfort. On the other hand, it is really aesthetic. 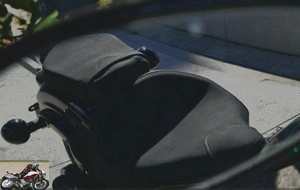 With a 12-liter tank, the Bolt offers a range of around 190 kilometers. Consumption during the test varied between 5.5 and 7 liters per hundred. 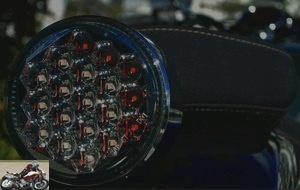 Here, it is stripped down: no room under the saddle, therefore, no passenger handle, only the essentials. On the other hand, the options catalog is prolific, following in the footsteps of the American brand.

In the daily use register, it should be noted that if the weight is forgotten while driving, it is not forgotten when you have to push the lady in the garage. And without engine assistance, we can feel the 251 kilos (247 kilos for the standard version). 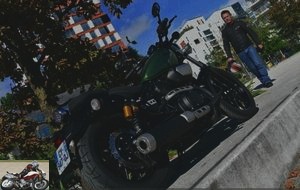 Urban, civil, the Bolt allows you to go back to the origins of the motorcycle, simple, efficient and pleasant from day to day. You will taste new pleasures of time passing on its handlebars, while being able if your heart tells you to hit a standing start at a red light while toasting the nonchalant scooters. Exclusive, it will be the guarantee to be alone on its handlebars to enjoy the road, the roads and long escapades. The R-Spec will win the favor of connoisseurs, despite its thousand euros more than the standard version already at 8,499 euros, the same price as the competition.