A limited series of 695 pieces in collaboration with Abarth

October 2007: Valentino Rossi unveils, on his M1, a livery paying homage to the Italian manufacturer Abarth during the Australian GP. GP fans thus discover a new form of partnership, between a brand of motorcycles (designed in 1877 to manufacture and repair musical instruments and whose first motorcycle rolled off the chains in 1955) and a brand of cars (designed in 1949 by Karl Abarth, Austrian by origin and who started by manufacturing racing parts for Fiat and Lancia). 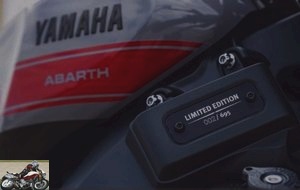 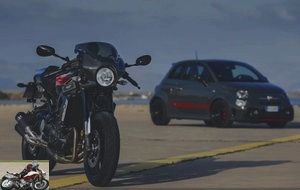 This partnership has endured, to the point of today taking a double form: on the one hand, the XSR 900 Abarth 695, globally available at 695 units and on the other, a Yamaha Abarth 695 XSR, also numbered and available similarly, at 695 convertibles and 695 "coupes". Common point between the two: the color, gray with red stripes and the upholstery of the saddle on one side and the seats on the other. What to concoct the ideal garage ?

The XSR 900 is already well known: an excellent machine in more ways than one, since it is she who is at the base of the Super Asshole movement. It should be remembered that this is a roadster with a gently retro look, but with very modern performance and comfort: the 3-cylinder CP3 develops 115 horsepower, with real character and a pleasure never lacking. A modern machine also by its electronic equipment: traction controls and engine modes are present. As for the chassis, it continues to impress with a geometry and suspensions of good behavior (better than on the MT-09, criticized on this point) as well as a formidable agility, which make this machine hyper efficient and especially very fun on small road. Because with this explosive engine that allows you to start again on the rear wheel with an impulse in first or second, you will not be bored for a single moment. 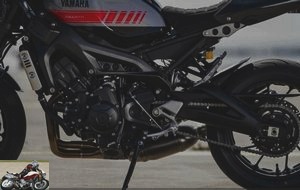 So the challenge for Yamaha was to turn the neo retro into a cafe racer. And we can safely say that the transformer is successful. Among the specific parts is the Akrapovic "complete" exhaust line, with laser engravings on the top muffler, for that little touch of exclusivity. The saddle is also specific, as well as a plastic cover which covers the top of the tank and on which the XSR and Abarth emblems appear. This one is also of poor quality, since it is already completely scratched at its base despite the few kilometers on the clock. 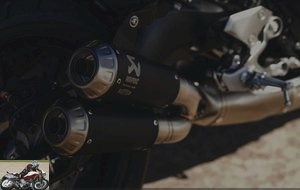 Third distinctive element: the trim, with carbon fork crown and seat backrest. They are very successful and of good quality: the rear encompasses the small LED light in beautiful sensual curves while at the front, the carbon fiber is visible inside the fairing. The whole thing is well integrated and from some angles the XSR 900 Abarth looks like Voxan Charade, which is no small compliment.. 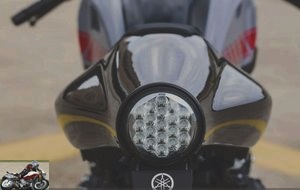 Last point: the handlebars. Yamaha has chosen for this XSR Abarth a very curved handlebar, similar to bracelets, which allows us to go without transition to the next paragraph.

And the least we can say is that the driving position is very radical, even more so than some contemporary hypersports! In fact, this very distinctive ergonomics will not necessarily suit everyone and it will be necessary to take this into account: you are very lying on the front and your wrists suffer quickly. This is the cafe racer spirit ! 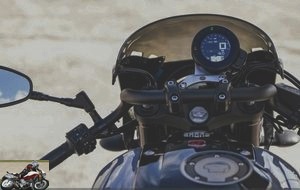 For the rest, we find its marks with a dashboard identical to that of the XSR and which includes a small on-board computer at its base. It then remains to adjust its level of engine mapping and traction control. On the way: The 3-cylinder comes to life in a tone a little more muffled than the original XSR exhaust. However, this remains well-mannered and will not be a nuisance for your neighbors..

Nothing to say about the flexibility of the 3 cylinders: we cruise on the boulevards at 50 km / h in fourth without flinching. On the other hand, given the ergonomics, one suspects that the movements at low speed are not particularly pleasant, with a very pronounced pressure on the front. On the other hand, the rearview mirror remains correct in the mirrors, it is always taken. With this new handlebars, the turning radius is average. 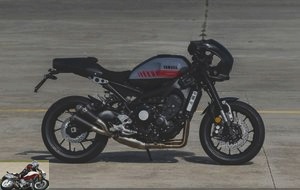 Let’s be clear: a test in the south of Sardinia, a mountainous region without highways. It’s hard to be categorical, then. However, it is obvious that the speed and therefore the air pressure will take some of the strain off the pilot. The fork crown is too low to provide lasting protection, unless you adopt the dab position. Parenthesis: dab is good: it can be cooked in different ways, with saffron, en papillote, small white leeks, etc.. 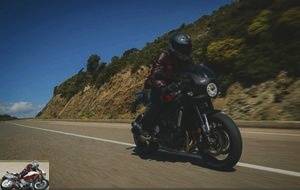 In short: on the classic XSR, the chassis was good and with memory, there are no stability issues. The Abarth should therefore register in the same register.

Lying on the bike, head (and arms!) Forward, you tell yourself they’re going to see what they’re going to take, the series of turns ahead over there ahead. In short, on the handlebars, we are motivated and willing to do battle. And we are a little disillusioned: not because of the Yamaha opener which framed this test and which was dragging itself seriously (in addition to having weird trajectories in the pins and failing to get out two or three times!), But especially because the demonic agility of the XSR has disappeared with this new handlebars and this new way of loading the front axle. Suddenly, it is no longer enough to blink an eye and open an ear to enter a bend as if he had insulted your sister, but on the contrary, we must force the handlebars and magic, grace, has faded away. On the other hand, we must recognize that the ergonomics of the motorcycle also work the legs and that we can refine this movement with a subtle, but necessary, support on the footrests. 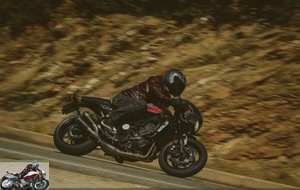 The natural having disappeared, let’s apply another method and drive there in a determined manner, a bit like we would with a hypersport. Good idea, right? Well no ! Because, caramba, still missed, the basis of this Abarth remains an XSR and therefore, the travel of the suspensions, the dead travel and the structural rigidity are not those of a sports car: there is therefore movement, which is detrimental to the precision. And in terms of precision, let’s just point out that we didn’t have enough time and the biotope to play on the suspension settings. Anyway, we manage quite quickly to find the limits of the ground clearance in curve. 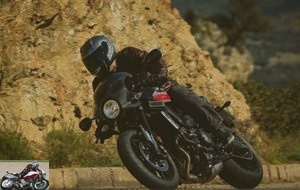 What we can say, then, is that unlike the XSR, the Abarth is no longer the queen of improvisation and the fun that comes with it. Can you redeem yourself for driving in big bends? We tell you as soon as we know …. 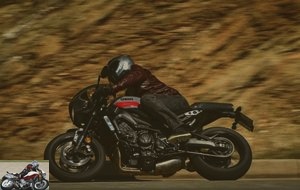 Impossible to conclude this chapter without mentioning the engine: it is top in the XSR, it is still just as good in the Abarth. 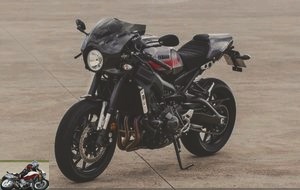 Idem: assembly identical to that of the XSR, logically, with a double disc of 298 mm in front clamped by radial calipers and a disc of 245 mm at the rear. 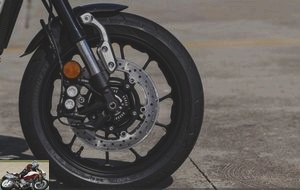 Let’s not go back to ergonomics, everyone is warned and will cope (or not) with it. However, you can rent the saddle, which seems quite soft and the suspensions, which remain considerate. And as we know that some bikers are not resistant to a (very) sporty riding position and the sensations that go with it, the XSR Abarth will have everything to seduce them. The seat cowl is easily removed, with a hex key located under the saddle. 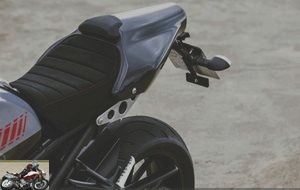 5.9 l / 100 read on the on-board computer, so with the 14 liters of the tank, we are just over 200 kilometers of range, which seems a sufficient step to rest the wrists. At the same time, we didn’t drive super fast either …. 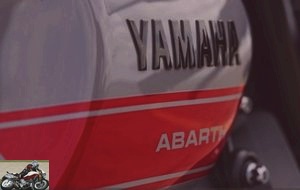 We weren’t in Corsica, but in Sardinia, to discover a very full bodied cafe racer … Sometimes a few improvements are just there for the look, but this is not the case with the XSR 900 Abarth. Its aesthetic is very clear and in the general opinion, rather successful. The limited series side is the guarantee not to find the same one at each red light. On the other hand, the opinions are more reserved concerning ergonomics. Not that it is radical: it is a fact and some bikers appreciate it. No, what is a little more disturbing is that this handlebar and what it induces breaks the balance so appreciated of the base XSR, without having, in return, much more sporty sensations for lack of a chassis which remains that of a general public roadster.

In fact, the expression "you have to suffer to be beautiful" takes on its full meaning: those who are sensitive to its exclusivity, to the finesse of the carbon rear shell, to the beauty of the Akra exhaust, those will be satisfied with this rare machine which then justifies the € 2,600 deviation from the standard XSR. 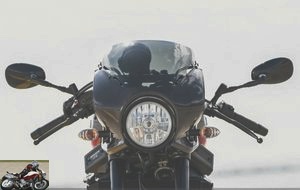 The technical sheet of the Yamaha XSR 900

The video test of the Yamaha XSR 900 Abarth