Reduced to its bare minimum, in comparison with the American market, Yamaha France’s custom range now has only three models. Among them, the XVS 1300 Custom, which does not leave fans of the genre indifferent ….

Present for more than 30 years in the custom market, especially in the United States where it currently has around twenty models gathered under the banner of its subsidiary Star Motorcycle, the Japanese brand has gradually forged an excellent reputation, posing for many users as a real alternative to the famous Harley-Davidson. 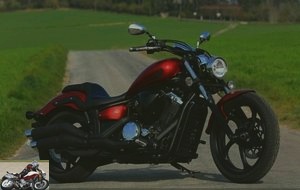 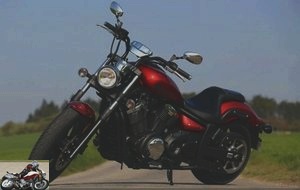 The design of the XVS 1300 Custom is aggressive and muscular, with lines evoking an animal ready to pounce, a very low rear mudguard and a large tank refined in its lower part.. 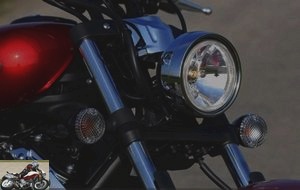 There are also some details reminiscent of a firearm, like the chrome fuel cap, inspired by a revolver barrel. This model also stands out for its 21 and 18-inch wheels fitted with 5-spoke alloy rims, as well as its long "slash-cut" type exhaust line, fitted with a 3-way catalytic converter..

The centerpiece of this package is of course the massive 60 ° V-twin, fitted with two balance shafts for smoother operation and rigidly mounted in the frame. A powerful and manly engine, with single camshaft and 4 valves per cylinder, fuel injection, single crankshaft crankshaft, forged connecting rods, composite ceramic cylinders and liquid cooling. 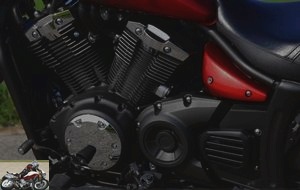 Indeed, contrary to what the many air cooling fins present, this engine is well cooled by water, thanks to internal ducts directly integrated into the foundry of the engine casings and a very thin water radiator housed between the tubes of the double cradle frame. The integration of the water hoses is just as discreet, as is that of the oil filter, at the bottom of the engine crankcase. 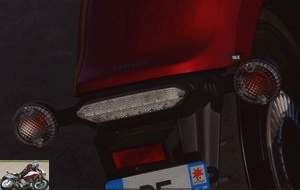 The final transmission is of course by belt, reinforced with carbon fibers. 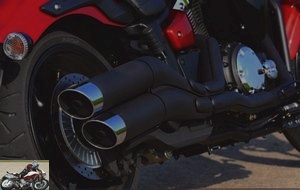 The instrumentation is minimalist, with a simple dashboard without tachometer attached to the handlebars. It includes an analog tachometer and various indicator lights, as well as a tiny digital dial comprising a clock, odometer and fuel level gauge.. 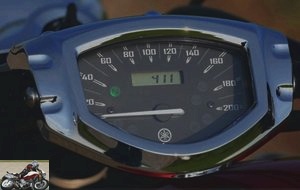 Oddly, the switch is placed behind the handlebars, at the level of the upper triple tree.. 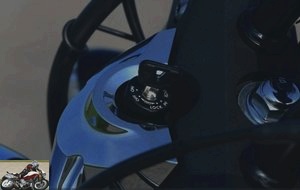 With a saddle height of just 670mm, the XVS1300 Custom is easy to understand and allows you to put both feet on the ground. The seat is comfortable and the driving position relaxed, with the legs extended, the feet forward, and a handlebars not too far away. 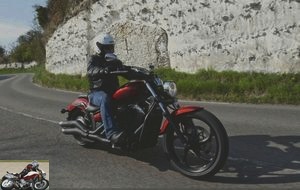 Contact, starter, the Japanese V-Twin snorts with a nice but rather discreet sound. And off we went for a little trip in the French Vexin, between Roche Guyon and the Yamaha Motor France headquarters in St Ouen’Aumône. From the outset, the low center of gravity and the relative neutrality of management are reassuring for the user. One would expect more heaviness and a tendency to fall off the front end due to the 21-size Ferris wheel. Well no, the custom Yamaha fits on the corner with benevolent roundness and not overly lively. The length of the assembly and its large turning radius, on the other hand, do not favor maneuvers or U-turns in a narrow street, especially as the machine still charges 293 kg all full on the scale. 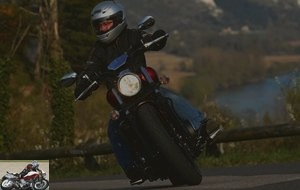 Well installed at the controls, the pilot of the XVS 1300 Custom enjoys a relatively comfortable seat. The wide handlebars help maintain precise steering control and facilitate quick angle changes in sequences, despite the presence of a large 210mm rear wheel. This does not have too much influence on the agility of the machine and contributes to its good in-line stability, despite the significant wind resistance experienced by the driver in the absence of a windshield.
The same goes for curves, where you can appreciate the very good grip of the Bridgestone Exedra G852 (ar) and G853 (front) tires fitted as standard. You have to go really hard on the angle and take a good shock when passing a pothole or a kerf to feel the chassis working under stress, without much impact on handling. This does not prevent the rear axle with its short suspension travel (100mm) from signaling its dissatisfaction by a sharp return to the driver’s lower back, despite the shock absorber being mounted on the progressivity link. 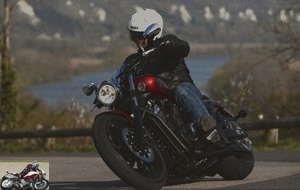 The engine, for its part, responds to the slightest demand on the accelerator, but bangs heavily at low revs and undergoes a few transmission jerks in acceleration and deceleration phases. On the other hand, we appreciate its omnipresent torque, its roundness under acceleration and its energetic response to acceleration when you wring out the handle..
The 5-speed gearbox, on the other hand, is not very fast, but the gears engage firmly and precisely, with the gearbox staggering ultimately proving to be more than adequate in road use. 1 and 2 for slow evolutions in town, 3 and more generally 4 on the road, 5 on the motorway, without the need to look after a 6 overdrive, which does not exist on this engine. 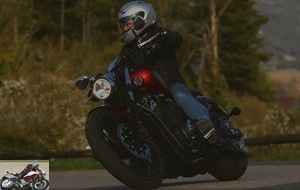 Although without a windshield, the XVS 1300 does not balk at using motorways and expressways, you just have to adapt the pace according to the pilot’s resistance to the wind. Pushed to its limits, the XVS1300 Custom quickly reaches 200 km / h on the odometer, which goes far beyond its normal range of use and risks very quickly attracting the wrath of the constabulary on the driver. At high speed, stability and heading hold are no less good and precise, the vibrations being well contained and not very present thanks to the double balance wheel from which the Yamaha V-Twin benefits.. 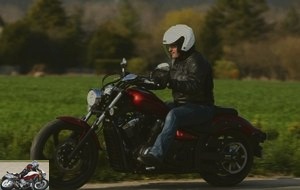 Able to accommodate a passenger, the XVS 1300 Custom has retractable footrests (a little high), but does not include real grab handles by offering a simple strap. It will therefore be necessary to hold on to the driver in addition to undergoing a shorter and firmer seat than that assigned to him. Finally, the increased weight at the rear will induce a greater firmness of the shock absorber on bad surfaces, which will inevitably affect the comfort of the passenger.. 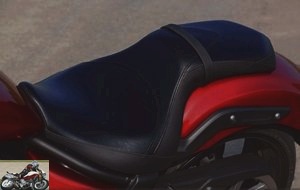 Properly equipped, the XVS 1300 Custom presents a satisfactory braking capacity under "normal" use, with a powerful and adjustable rear brake, assisted by a sufficiently effective front element with double piston calipers. Be careful, however, of excess optimism at high speed because the machine is still its weight and requires a minimum of anticipation to stop calmly, especially since ABS is not offered on this model. 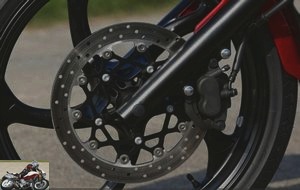 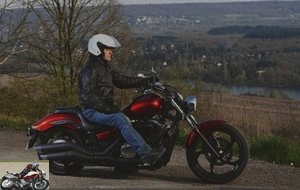 Although without a windshield, the XVS Custom does have some nice practicalities, starting with the choice of a toothed belt final drive that requires less maintenance. Its side stand is equipped with a circuit breaker, while controls on the right stalk allow you to change the display of the digital dial. There is also the presence of a warning and a circuit breaker, as well as a lockable fuel cap. A warning light on the instrument panel indicates the passage of fuel reserve, as well as any malfunctions.

Sold for € 10,999, the XVS1300 Custom brings a bit of freshness to Yamaha Motor France’s custom range, while expanding it at a lower cost since this model already exists across the Atlantic. Its selling price seems justified in view of the level of quality offered, but it will however have to reckon with some equally attractive rivals, in particular the very authentic Harley-Davidson 1200 Custom, Seventy Two and others ….

The technical sheet of the XVS 1300