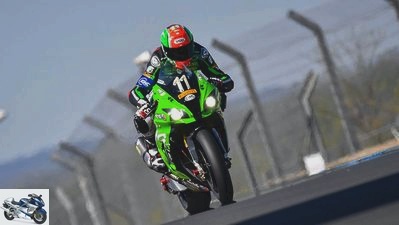 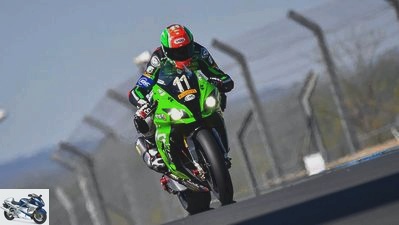 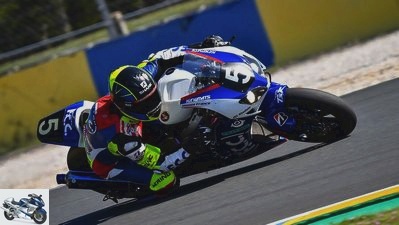 2/6
The provisional second place on the grid went to # 5 FCC TSR Honda. 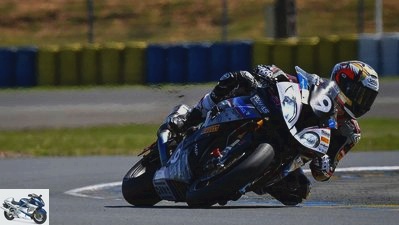 3/6
The # 9 TECMAS-BMW-Team ranks third on the grid for the time being. 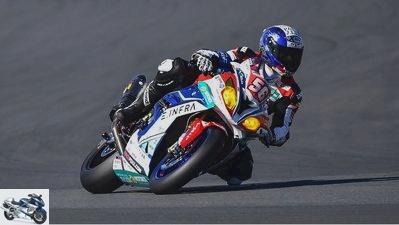 4/6
The GERT56 team from Pirna got the provisional 23rd place on the grid. 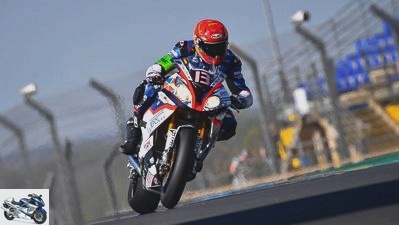 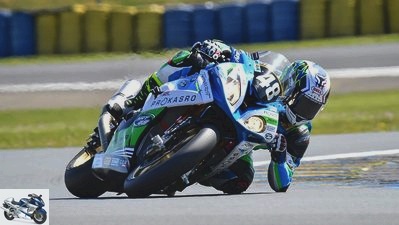 Even if Team # 11 SRC Kawasaki was able to secure pole position, it remains to be seen whether Guarnoni will be able to take part in the race. The Frenchman fell and had to go to the medical center.

Second place on the grid went to Mandy Kainz’s Austrian team. The # 7 YART Yamaha was on average only 0.155 seconds slower than the Kawasaki at the front. The Australian Broc Parkes, the German Marvin Fritz and the Japanese Takuya Fujita hit an incredibly high pace.

This year, Le Mans has the best weather in ages. “I haven’t seen anything like this in the last ten years, really hot, really awesome”, said the Frenchman Kenny Foray to motorradonline.de. However, the high temperatures also caused many falls. The free practice session on Thursday morning had to be canceled six times with the red flag. Some tire manufacturers in particular were surprised, having packed for the usual cool temperatures. So poker started on Thursday.

In free practice, the # 9 Tecmas-BMW team achieved the fastest time. The French ended up just ahead of the # 11 Team SRC Kawasaki and the # 5 FCC TSR Honda France with a time of 1: 37.015 minutes. As the new BMW works spearhead, the NRT48 team landed in sixth place with Kenny Foray, Peter Hickman, Lucy Glockner and reserve driver Stefan Kerschbaumer. On the other hand, the # 13 Penz-BMW had problems, as it had to take the emergency exit back to the pits twice during the session. For qualifying, however, the S 1000 RR purred again flawlessly.

For some years now, tires have also been regulated in the endurance world championship and so the teams in the EWC and STK classes have only limited contingents available. Therefore, many teams decided to only do a few laps on Thursday afternoon, as the temperatures tomorrow morning should be cooler and therefore more grip. The best time of the day was delivered by Julien da Costa from the TECMAS-BMW (# 9) team. His time was 1: 37.013 minutes. The German Marvin Fritz was narrowly beaten, with a 1: 37.043 on the YART-Yamaha # 7. Overall, there was more discipline in the first qualifying than in free practice, because there was only one red flag in the run for driver 2.

On average, however – the fastest times of all three drivers are taken and divided by three – the provisional pole position went to Team SRC Kawasaki with starting number # 11. Randy de Puniet, Mathieu Gines and Jeremy Guarnoni finished at 1: 37.925 minutes. The provisional second place on the grid went to # 5 FCC TSR Honda ahead of # 9 TECMAS-BMW. Ingo Nowaczyk’s team # 48 NRT48 from Oschersleben came in fifth. GMT94 finished sixth ahead of the record world champions of # 2 SERT. 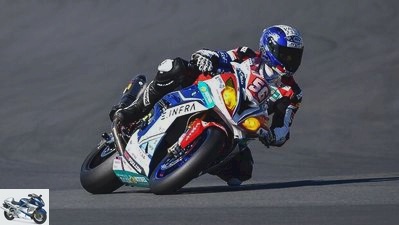 The GERT56 team from Pirna got the provisional 23rd place on the grid.

The # 111 Honda Racing, # 13 Benz and # 21 Mercury Racing rounded off the top ten. # 8 Team Bolliger Racing finished in 15th place, the GERT56 team from Pirna got the provisional 23rd place on the grid. Motobox Kremer # 65 came in 26th, WSB-Endurance # 99 in 33rd and the Hertrampf-Ducati # 100 landed on 37th. It is particularly gratifying that SERT’s long-distance veteran Dominique Meliand is back after a long heart disease. The legendary team boss presented himself recovered, strengthened and fit at the Le Mans racetrack.

The German Arnaud Friedrich, who should start for the LRP Poland # 90 team, is currently doomed to watch. He won’t celebrate his 18th birthday until Saturday. He was supposed to take part in the race, but the French federation has refused to give him permission to start. All levers are currently being set in motion so that the Saxon can qualify in the warm-up on Sunday and still be able to start.