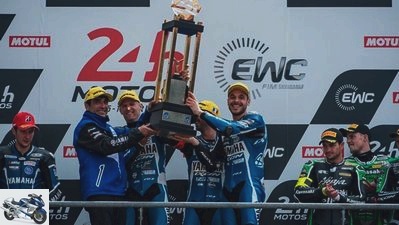 24 hours of Le Mans
The blink of an eye final

Yamaha versus Yamaha, GMT versus YART and they’re both always in the same lap for 24 hours. Unbelievable!

When two teams race at full throttle for 24 hours, are always on the same lap for a total of 860 laps and 26 pit stops and at the end of lap 860 race over the finish line with a gap of almost 20 seconds, then it’s a blink of an eye final.

Even if the blink of an eye takes a little longer in this case.

The two Yamaha works teams GMT94 and YART delivered this fight at the endurance classic on the Sarthe. With the better end for the French from GMT, while the Austrian YART team led with the German IDM champion Marvin Fritz for a long time, but ultimately came in close to second.

How close is a look at places three and four. Like the official Suzuki team, the SRC Kawasaki team, which also entered the race as favorites, has already lost 12 laps. In the World Cup, the Suzuki team now leads with 95 points just ahead of the Kawa troop (92 points).

The complete results hour by hour including the World Cup stand of the different classes are available fimewc.com