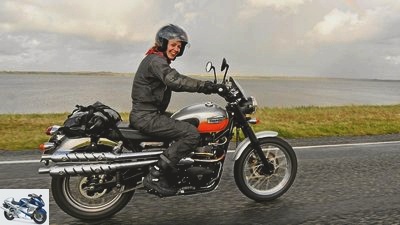 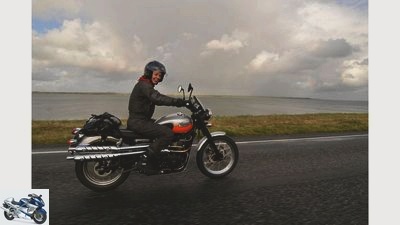 1/14
Time for the rain suit: a short shower on the way to Tyboren. Motorcycling in Denmark between the North Sea and the Baltic Sea offers a lot of variety. 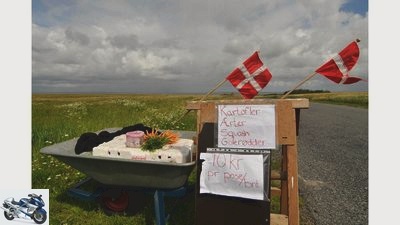 2/14
The Dannebrog should not be missing even at the smallest vegetable stand. 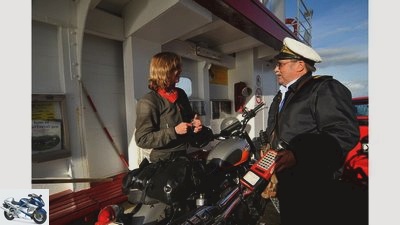 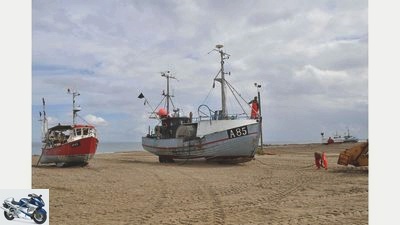 4/14
Torup Beach: The fishing boats are pulled onto the beach with a 700 hp caterpillar. 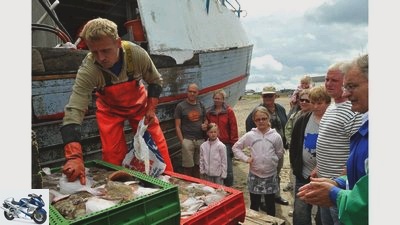 5/14
There fisherman Diony sells the plaice directly from the boat. He catches around 1000 kilos a day. 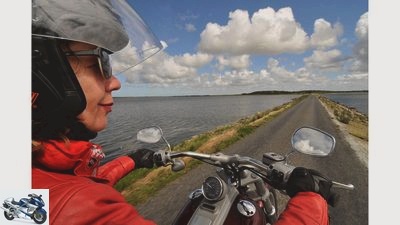 6/14
Endless highway? No, dam on the way to Aalborg. Boundless sky, wind, sun and V2 thunder spice up the tour. 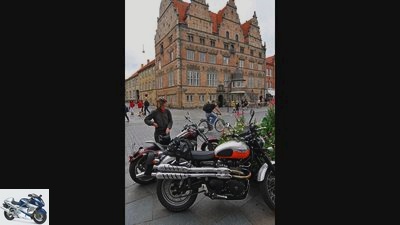 7/14
Aalborg, the first house on the square. The 1000 year old town with its picturesque old town is fascinating. 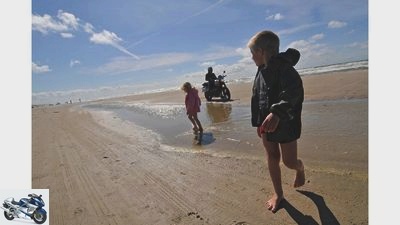 8/14
Anything goes on the beach at Løkken: sand driving fun and beach games are not mutually exclusive. 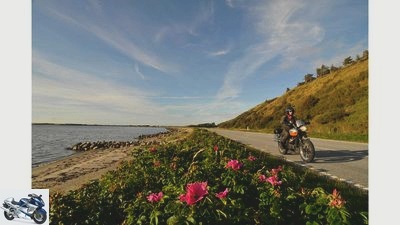 9/14
Limfjord tours often lead along the water, you breathe vastness and salty air, the wind hisses to the horizon. 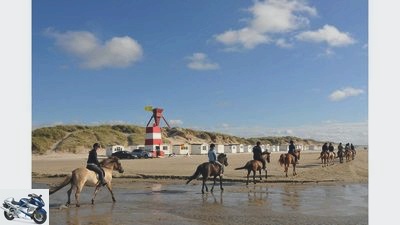 10/14
Horse riding tours can be booked on the beach at Løkken. Why not swap your bike for a horse saddle? 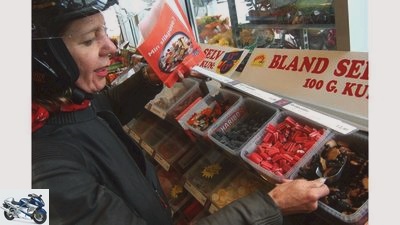 11/14
Seal pulling paradise: Denmark is the land of sweets, but the Danes are not too fat in comparison to Europe. 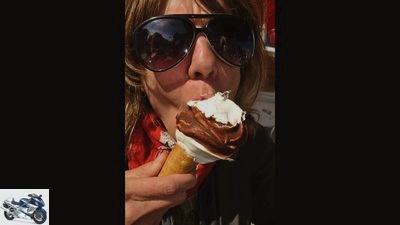 12/14
Summer, sun, sea and the sweet little sin: The Limfjord expands the senses. 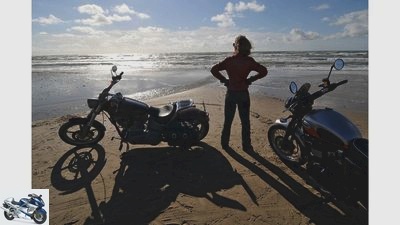 13/14
Motorcycles are allowed on some beaches. Here are three strong guys in front of the infinity of the sea. 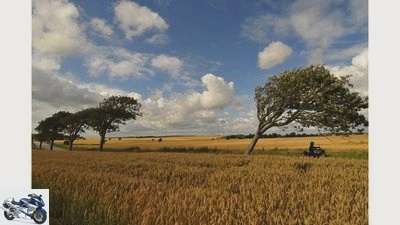 14/14
Wide inland fields, the beat of the twins. Are we in the American West?

On the road in Denmark by motorcycle

Denmark lies between the North Sea and the Baltic Sea. The Limfjord in North Jutland connects the two seas. A trip to the great unknown sound.

Motorcycling in Denmark. Can that be exciting? Klaus and I just try it out. Drive up to Jutland, want to go around the Limfjord. Limfjord? In the circle of friends, some people puzzled unsuccessfully what it might be about; because the 180 kilometer long sound is hardly known in this country. It is a large body of water, connecting the Baltic Sea with the North Sea. In the east at Hals it divides the country like a river, then becomes larger and more sea-like towards the west. Finally, in Thyboren, it unites with the North Sea through a narrow opening. The Limfjord is like a light blue ink blot that has spilled onto the Danish map.

Løgstør is located on a canal that is almost four and a half kilometers long. It was dug in 1856 by order of the Danish King Frederick VII because the Lim fjord was too shallow at this point. For ships anyway, but also heavily loaded boats got stuck in the silt. It took five years until the 4.4 kilometer long canal was completed after 400 German guest workers had dug three meters deep by hand. Thousands of cargo ships now chugged from east to west and back. In 1899 alone, over 3,000 ships passed through the Friedrich VII Canal. Today you can only see tourist boats on excursions here.

Denmark’s largest Viking castle once stood directly across from Løgstør on the north bank: Aggersborg. It is believed that the fortification dates from 400 BC. BC. It is also said that 5,000 Vikings lived there. Unfortunately, today you can only see a reconstructed wall, which is supposed to represent the approximate dimensions of the castle.

Since Løgstør is, so to speak, in the middle of the Limfjord, wonderful tours can be undertaken from here. For the time being, we are drawn to the right sea, to Torup in the north, to get in the mood. The tourists look out to sea with anticipation and await the arrival of Nick and Diony, two seasoned fishermen. Every morning the two cast their nets on the high seas. When these are full to the top, the fishermen naturally return; but not in their harbor – there is no such thing – but on the beach. However, there is always low tide at this time in the late morning. And since you can’t just leave the big fishing boat to the sea, it has to be pulled out of the water. In the 21st century, this is done by an approximately 700 hp Caterpillar bulldozer, which hauls the cutter ashore over the sand with the aid of loudly clicking iron chains. 200 years ago, however, the heavily loaded ships were still pulled ashore by hand with rollers. Troublesome, troublesome. It is a great spectacle for us and all the other tourists.

Nick, in particular, draws my gaze. Not that he could compete with the “sexiest man alive”. The face is full of wrinkles, framed by a shaggy beard, a hairless mane. An eternal butt glows in the middle, not much of the teeth can be seen. A classic fur seal straight out of a book. At first sight it might scare you. But when I approach him to inquire about the catch, he beams at me and proudly reports about all the clods and gurnards that have caught them. They catch 1000 kilos of fish a day. He seems to be the famous soul of a person who does not show this at first glance. His handsome colleague Diony meanwhile sells the fish to the tourists. He takes ten kroner per plaice. Fish can hardly be fresher. 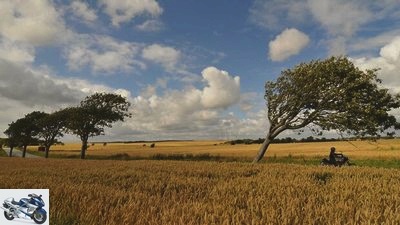 Wide inland fields, the beat of the twins. Are we in the American West?

While the two of them throw themselves into their Opel Omega station wagons to sell the catch to the restaurants in the surrounding villages, we set off. At the roadside there is a brown sign with a daisy flower in the middle: the symbol for the daisy route. It is a transport network that connects the most beautiful roads in Denmark. We like to follow him and jet south. Behind Øsløs, a long bridge that offers a fantastic view of the surrounding area brings us to Mors, the largest island in the Limfjord. The summer sun is finally back, so motorcycling has become what it should be again: enjoyment. Today I’m sitting on the beautifully silver-orange painted Triumph Scrambler, which is wonderfully relaxed and easy to drive. The sky is blue, the meadows are lush green. The grain sways gently in the midsummer wind. Every now and then we pass pretty villages. Unfortunately, you hardly ever see people. Where may they be? Maybe on the beach? Or have a siesta in their beautiful houses, smørrebrød? We enjoy solitude. A gentle west breeze makes the branches wriggle in the trees.

Lively we turn west, because there we want to go back to the sea to visit the place where the Limfjord says goodbye to the North Sea. Cross a gigantic bridge via Hurup to Thyboren. Unfortunately, the weather changes here and has now become really nasty. It is pouring in torrents, the now strong west wind creates a list. Rain suit yes or no? Always that annoying question that is so difficult to answer. As a motorcyclist you are optimistic and like to see the sun smile again on the next corner. But that’s not the case, so we submit to the torture in a full-body condom. The water rages on the sea. A ferry has a hard time staying on course in the battle of the forces. We watch the spectacle for a quarter of an hour and then decide to return to the interior. It’s nicer there. 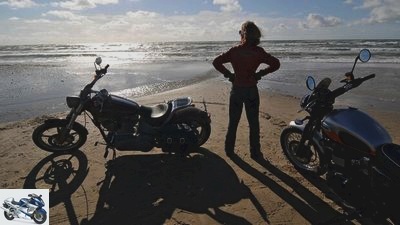 Motorcycles are allowed on some beaches. Here are three strong guys in front of the infinity of the sea.

The station wagon lands back in the saddle pocket of the Harley that Klaus uses to dazzle the Danes today. Anyway, these Danes. Did I mention that most people in Denmark smile almost all the time? No facade, everything is real. A very sympathetic people.

On the way back via Mors, rainbows accompany us as compensation for the shabby storm. New ones keep popping up, we can’t get enough of each other. The engines boom below us at low speeds, the Salling peninsula disappears into the rear-view mirrors, and we reach Vitskøl monastery on the mainland. The famous herb garden is still open. A romantic gem, an Eldorado for all green fingers in the world. On the one hand, medicinal plants are grown here, on the other hand 36 herbs grow here, which, whether their intense smell or their special shape, are also recognized by people who have lost their sight. A garden for the blind, then. 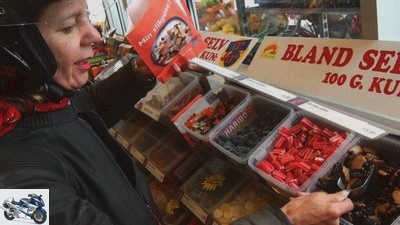 Seal pulling paradise: Denmark is the land of sweets, but the Danes are not too fat in comparison to Europe.

Cruising east through the hinterland is our next project. The two-cylinder roars through grain fields to Aalborg, which has already won three Danish championships with its football club Aalborg Boldclub. It continues with the lowest speeds. Hals is the gateway to the Kattegat in the east. The beach is huge and almost deserted. White sand wherever you look. Before you can really swim, you have to walk a few hundred meters. We experience a completely different beach further up in the north. This is where Løkken is located, at first glance a rather dreary tourist town. You can ride a motorcycle on its beach. The wind blows strongly from the west, and we carefully turn a few laps, always on the lookout for small children and jellyfish. The two-cylinder engines enjoy the solid sand, the driving experience is spiced up by the big waves that lick our bikes with a thunderous sound, only to then withdraw with a great, crunching noise. That’s why we’re here: Summer, sun, beach, there is hardly a more relaxed way to go on a motorcycle tour. 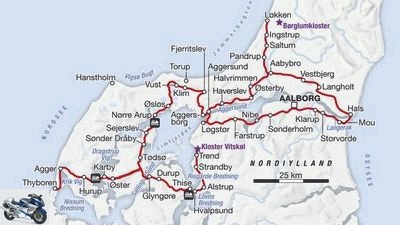 There is a lot to drive and a lot to see at the Limfjord in Denmark. If you love the sea, you should definitely treat yourself to the limitless sky and the relaxed Danes.

General:
The Kingdom of Denmark is made up of the large Jutland peninsula, the island of Zealand, the self-administered parts of the Faroe Islands and Greenland, and around 500 other islands. The head of state of the constitutional monarchy has been Queen Margarethe II since 1972. The country has been part of the European Union since 1973, but the euro is rejected by the population; one pays in kroner: one euro is about 7.5 kroner, one kroner about 0.13 Euro.

Getting there:
After Hamburg on the A 7, after the border on the E 45 to the north. Exit at Hobro, then the road to the exit to Løgstør.

Best travel time:
April to September. From May to July the sun shines an average of eight hours a day. You should still take rain showers into account, fleece belongs in your luggage. 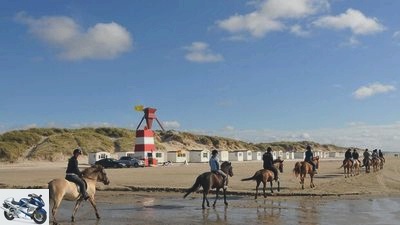 Horse riding tours can be booked on the beach at Løkken. Why not swap your bike for a horse saddle?

Stay:
There are plenty of hotels. Løgstør is the ideal base for the Limfjord circuit. The “Løgstør Park Hotel” costs 150 euros in a double room. Pensions, Bed & Breakfast or accommodation for backpackers can be found in every town, the youth hostel in Aalborg costs 38 euros per night.

Leisure time:
Boats can be rented almost everywhere, and the Limfjord is also suitable for swimming, snorkeling and diving. There are numerous offers for riders, and bike rentals are a dime a dozen.