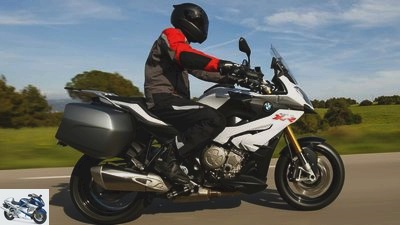 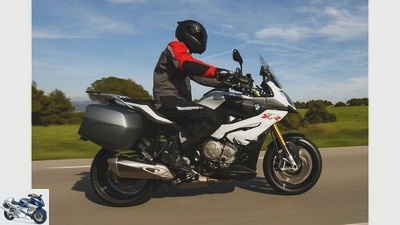 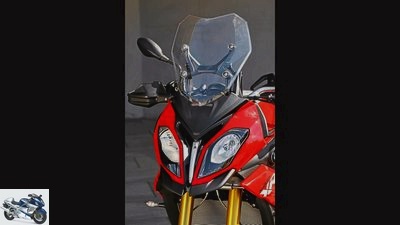 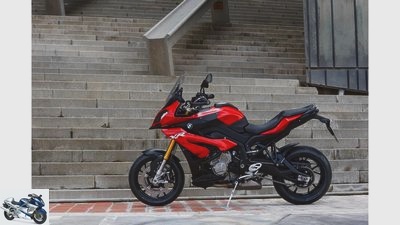 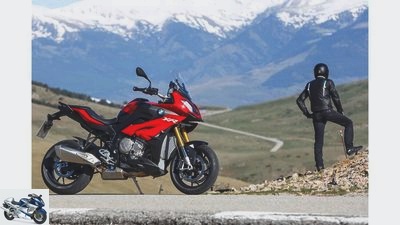 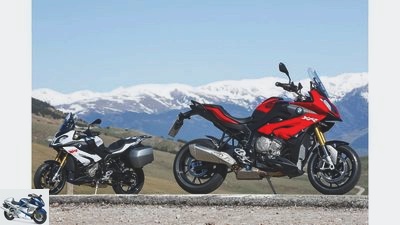 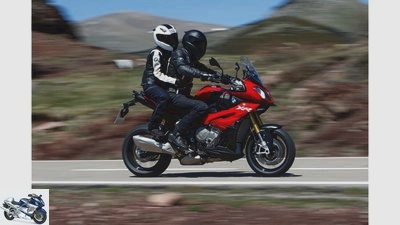 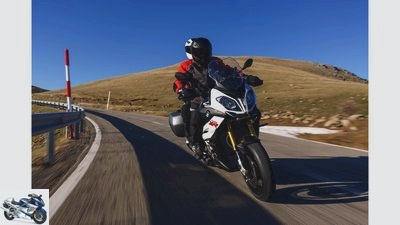 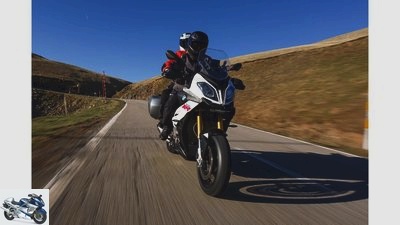 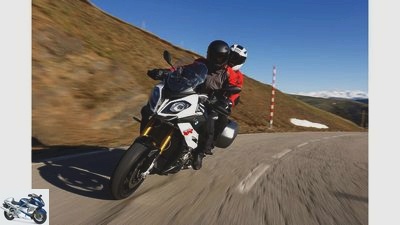 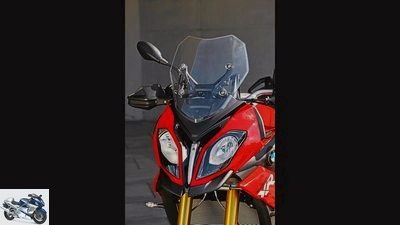 10/21
Change of position: In the raised position the wind protection is surprisingly good; to do this, the pane is simply pulled up; that is still possible at 100 km / h, … 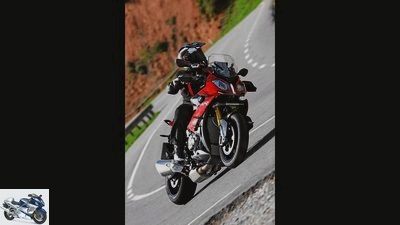 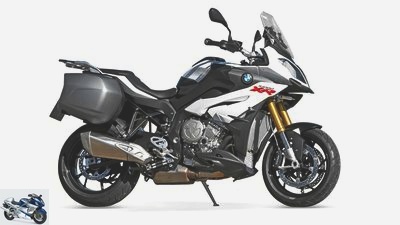 12/21
Red is probably intended as a Ducati counterattack, but the XR is also available in white – and, of course, optionally with suitcases. 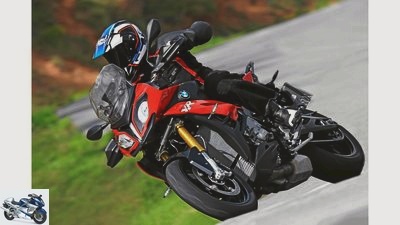 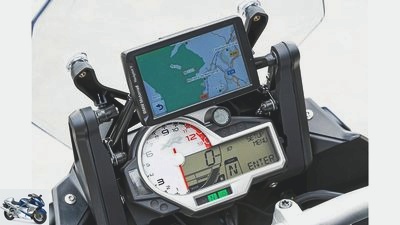 14/21
Matters of opinion: Instruments from the R, the navigation system, typical for BMW, finely integrated. 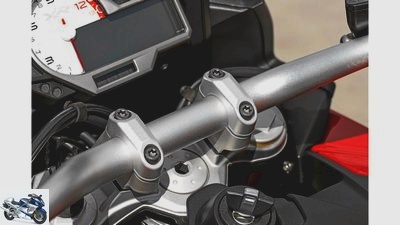 15/21
Smart solution: rubber mounts on the handlebar brackets do not soothe the handles, but the mirrors. 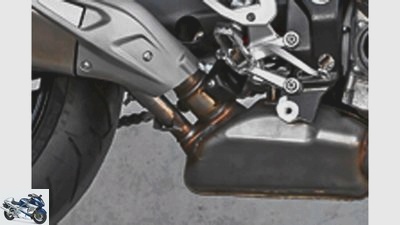 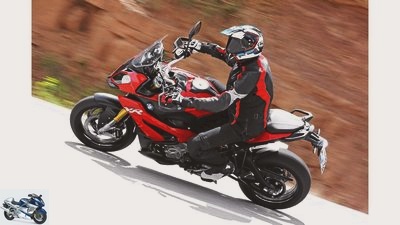 17/21
Loose from the stool: The casual seating position belies the fact that the S 1000 XR can be a veritable road milling machine. 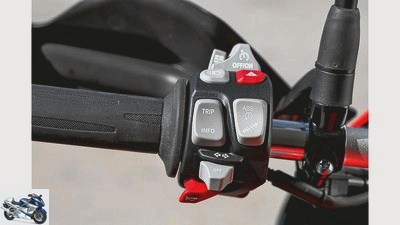 18/21
Everything under control: complex equipment, easy and logical to use. 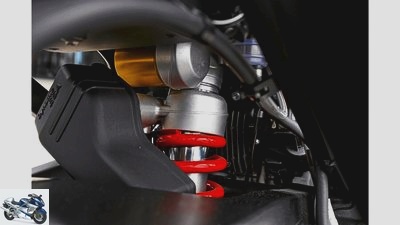 19/21
Area of ​​tension: semi-active Sachs spring elements with servomotor for the spring base. 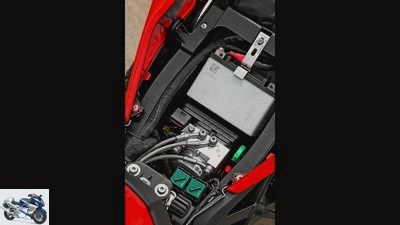 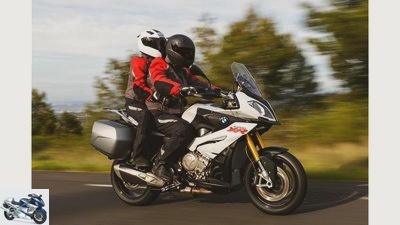 S 1000 RR athletes and S 1000 R naked bikes are given a third friend: the BMW S 1000 XR. BMW invented the term Adventure Sports for them. But what’s really in it, more adventure or more sport?

There are plenty of cattle under the white and blue sky, but there is even a sacred cow in Munich. It’s called the R 1200 GS, the basis of success, the gold donkey – or actually the gold cow – from BMW Motorrad. The Boxer-GS is therefore inviolable, under no circumstances should even a hair – or croissant – be bent.

Especially not from a new model that could get in the way as a crossover bike. In-house competition, even cannibalism? That doesn’t work, so the new BMW had to S 1000 XR be positioned with a respectable distance. Marketing strategists pondered and found the term adventure sports.

Sport is clear, but what does adventure mean? At least not off-road, this topic – which is part of the concept with the direct competitor Ducati Multistrada – is never even mentioned in connection with the BMW S 1000 XR. It shouldn’t be able to do terrain at all. The extent to which crossover machines with 17-inch tires are suitable for excursions into the rough can be argued about anyway. If you look at the grippy Pirelli Diablo Rosso II tires and the filigree sports footrests, the XR probably boils down to sports.

The BMW S 1000 XR undoubtedly has the genes for this, as it was derived directly from the naked S 1000 R. The engine is practically identical, apart from small things such as a more powerful alternator and a modified exhaust system. The latter is already designed with a view to future emissions regulations.

It still has an exhaust flap, which is only allowed to act depending on the speed in the thicker of the two connecting pipes between the front and rear silencer. The thinner tube is always open. Power and torque therefore remain practically unchanged. As with the R, the BMW S 1000 XR also proclaims a solid 160 hp, experience has shown that even more is offered.

Apart from the engine, almost all of the rest of the BMW S 1000 XR is new. There is hardly any other way if you are serious. That means a new frame with a flatter and higher positioned steering head, plus a reinforced rear frame, a rocker arm around five centimeters longer, longer-stroke spring elements, new bodywork. Incidentally, BMW’s up-and-coming designer Andreas Martin draws a parallel to the GS, whose “roughness” he has stylistically adapted.
Those who diligently tick the boxes on the option list – and most XR buyers will certainly do so – will find the niceties familiar from the sister models. Many of them are not essential for the driving experience, but you don’t want to be without modern assistance systems and electronic helpers. For example additional driving modes, semi-active suspension Dynamic ESA, shift assistants, cruise control, cornering ABS and other goodies.

All tests and articles about the BMW S 1000 XR

But back to the initial question: adventure or sport? The answer can be found on fantastic roads around Montserrat, the rugged sandstone mountains near Barcelona. In terms of ergonomics, the BMW S 1000 XR offers the best conditions for adventure and sport. The handlebars are positioned high and wide, very similar to the GS. Of course, the knee angle isn’t quite as casual as that of a boxer. And the thighs have to spread a little around the wider tank, which holds 20 liters of fuel.

As is typical for BMW, the four-cylinder hisses briefly at the driver when the starter button is pressed. The sound from the lowered, longer rear silencer is a bit more subtle compared to the R, but still a clear message. The clutch could be a little easier to operate, but the mechanical transmission ensures a sensitive feeling on the lever. To start rolling, the engine needs a bit of gas and speed, especially since the first gear is quite long. The gear ratio corresponds exactly to that of the R. Despite the “starting weakness”, the speed range of the BMW S 1000 XR is downright gigantic. From idle speed to limiter at 12,000 rpm, everything can be used. This four-in-a-row never appears indiscriminate.

The BMW Quattro is still a rough companion. It spurts into the exhaust when pushing, inhales hoarsely from the airbox and roars all its power out of the angular muffler at the top. And in the middle area, the handlebar ends of the BMW S 1000 XR are clearly tingling. Surprisingly, unlike the R, the mirrors don’t shake out of consideration. The reason are rubber-mounted handlebar brackets that have been matched to the resonance vibrations of the engine and handlebars. They also prevent the fingers from becoming numb despite the permanent tingling sensation.

As already mentioned, there is usable thrust in the lowest speed ranges. If you want to let your arms stretch out, you shouldn’t switch to 7000 rpm. Above this, a catapult-like acceleration sets in, which lets the BMW S 1000 XR shoot into the next bend in the twinkling of an eye, leaving you almost out of breath. Anyone who uses such areas on the country road must know what they are doing. Constant stirring in the gear is actually not necessary. But it’s a lot of fun because the circuit works very accurately with minimal travel. And because the shift assistant lets the gears slip in without using the clutch. In both directions. When downshifting, this is sometimes accompanied by a brief throttle. A wonderful pleasure. The driving modes change the response behavior of the quadruplet. Very restrained with reduced power in Rain mode, gentle in Road mode, direct in Dynamic mode (part of the Pro riding mode option), but by no means too aggressive.

At the same time, the on-board computer intervenes with other optional equipment, namely the Dynamic ESA chassis, DTC traction control and ABS Pro. The latter now comes from Conti. In Hanover, too, a lean angle-dependent control has now been developed that is functionally comparable to the Bosch MSC system – in popular jargon, curve ABS. In road mode, the rear wheel is also effectively prevented from lifting. Important for such a concept with longer spring travel and a higher center of gravity. How important is the dynamic mode, in which the rear wheel occasionally loses contact with the ground. Which does not lead to a somersault forwards, but affects the stability on the brakes. The BMW S 1000 XR wobbles, in extreme cases wedges with the rear.

Okay, that’s high level whining. The same applies to the semi-active chassis from Sachs, which works splendidly and offers hardly any starting points for criticism. Essentially the same as that of the R, it offers impressive comfort and ample cushioning thanks to the extended spring travel. Even in dynamic mode, there is no question of sporty hardness. The response in chatter waves before curves could be a bit smoother, and dedicated heaters would want a little more damping at the rear here and there. It’s just a shame that you can’t selectively intervene in the individual functions of the riding modes as you can with the RR; a permanently individually composed mode would be a good thing for the BMW S 1000 XR.

As expected, the BMW S 1000 XR is excellent at sport. But can she also touring? From an ergonomic point of view, you can certainly endure very well in the saddle of the XR in the long term. Especially since there is a range of benches of different heights to choose from for subjective requirements. Low-lying pegs also give the passenger a comfortable spot. The draft shield can be varied in only two stages. The lower position leaves your head free in the wind, turbulence is limited. The upper position provides surprisingly good protection, and the wind tunnel pays off. Luggage can be stowed in slim suitcases. Unfortunately, they do not hang on discreetly hidden mounting points, but on their own, not particularly elegant tubular brackets.

In principle, therefore, good conditions for sustainable tourism. If it weren’t for this sports engine that is always hungry for gas and speed. At 100 km / h, the foot often shimmy after a seventh gear. Which is not due to a too short translation, but to the hoarse rattling and tingling four-cylinder in the handlebars, which gives the driver bumblebees in the rear. Some people could get that by looking at the price list. The surcharge compared to the R is a hefty 2000 euros. Those who order the attractive Touring and Dynamic packages are approaching 18,000 euros. And with GPS, suitcases, a nicer Akrapovic damper and other goodies, the € 2,000 barrier can be cracked. 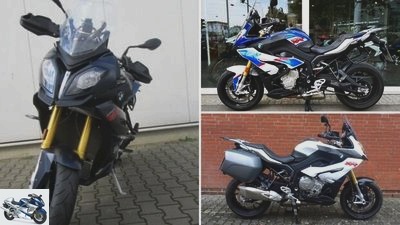 Whether adventure bike or sports tourer, the BMW S 1000 XR could be just the right bike for a sporty motorcycle tour. The availability on the motorcycle market is very good and you can find used copies much cheaper than new vehicles. Here is a current price comparison: used BMW S1000XR in Germany.