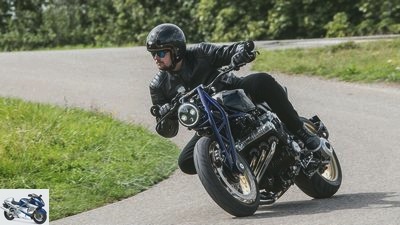 1/19
Honda CBX 1000 with single-sided swing arm, Girder fork, parts of a Golf 7 and can be driven on the road. Wimoto from the Netherlands plays the big motorcycle puzzle. 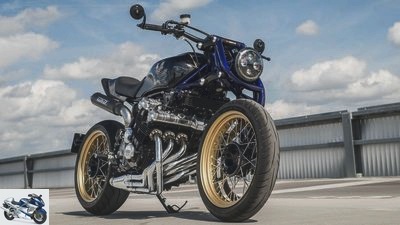 2/19
Requirement of the customer: “Front and rear by single arm, still mobile, please spoke rims and all that on the six-end Honda. Just surprise me!” 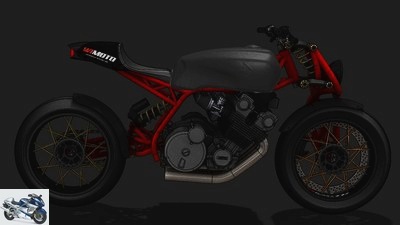 3/19
First simulation using 3D software: Original geometry with the new components, unfortunately not mobile. So all over again. 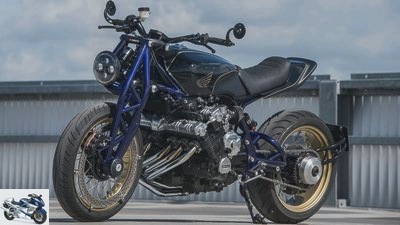 4/19
The original CBX frame had to be reinforced, especially in the area of ​​the steering head. The torsional forces acting on the one-sided wheel suspensions on the frame would be too great. 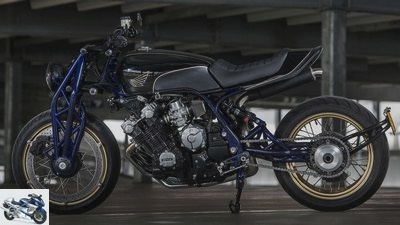 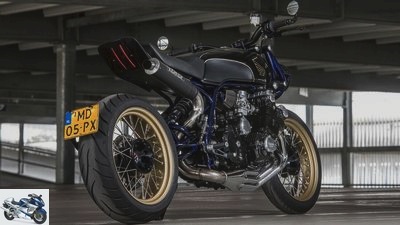 6/19
The swing arm and fork are made from chromoly steel by Wimoto. A light and at the same time high-strength steel alloy. 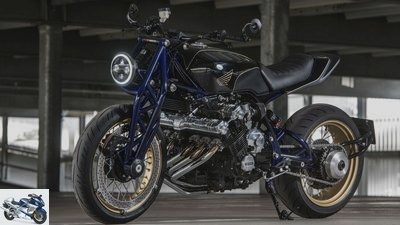 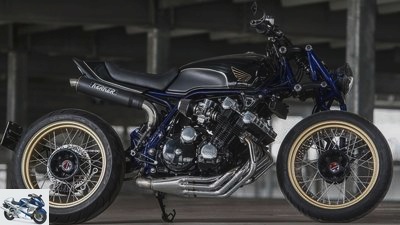 8/19
… on the frame and chassis all the more. The CBX gets a completely new geometry for stability and drivability 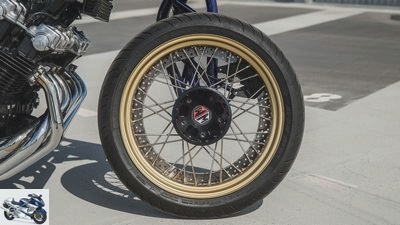 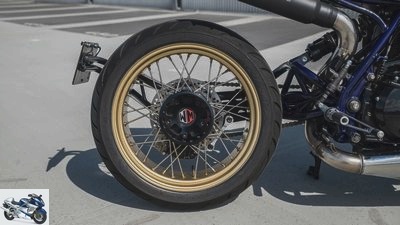 10/19
The hub of the GS is also used at the rear, but on the drive of a Honda VFR 750, which also takes over the braking system and the eccentric tensioning device for the chain. 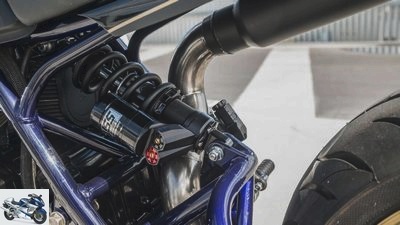 11/19
YSS supplies the adjustable rear shock, which is attached eccentrically to the frame. 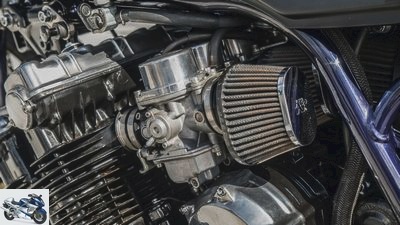 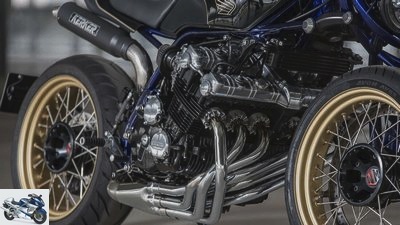 13/19
The 6-in-1 system from Kerker was already installed. Wido simply puts the muffler up on the rim for free security. 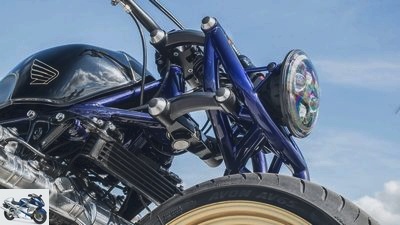 14/19
The principle of the Girder fork is over 100 years old, but it is still justified today when it is made as blatant as it is here. 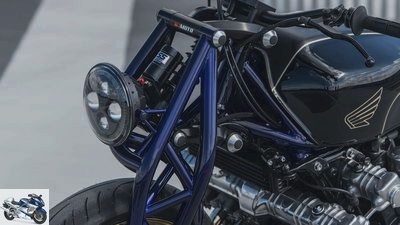 15/19
Wimoto builds the one-armed guide itself from chromoly tubes, the black fork bridge with aluminum struts are milled from one piece. 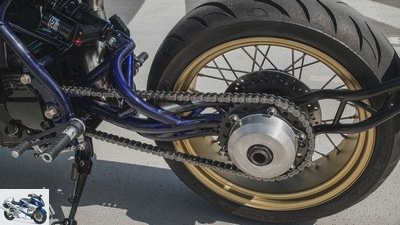 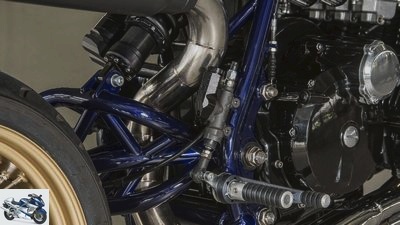 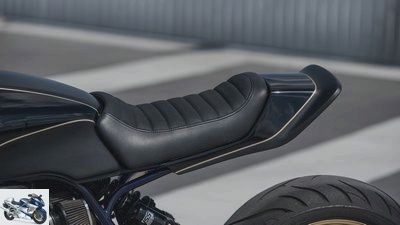 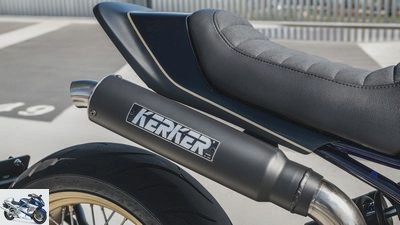 19/19
Wido places the dungeon silencer high at the rear.

Correction: Of course, it is technically wrong to call the front suspension shown here a single-sided swing arm. A trapezoidal or girder fork is not a rocker in terms of its operation, even if it may work that way with such a construction. Now we can all calm down again.

And finally the story of the Honda CBX begins with the two single-sided swing arms. Wido from Wimoto Engineering got the idea for this from his customer Reinoud, who actually only says: “Front and rear by single arm, still mobile, please spoke rims and all that on the six-end Honda. Just surprise me!” Sounds almost like the Saturday shopping list. Everything is possible, thinks Wido and begins to design. 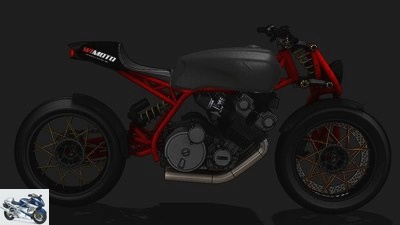 First simulation using 3D software: original geometry with the new components, unfortunately not mobile. So everything is new for once.

The conversion begins with the measurement of the original bike and subsequent 3D simulation of the new components with the original geometry. Result: unfortunately does not work at all. So a new geometry has to be calculated. Steering angle, caster, wheelbase, length of the swing arm and pivot point, position of the shock absorber. Once everything is new that can be achieved using 3D modeling in the CAD software Solidworks after a few hours of construction. 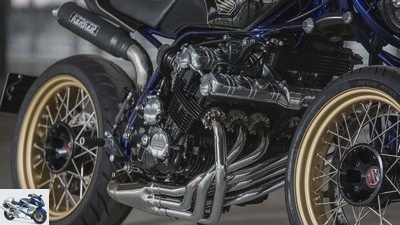 Honda CBX 1000 with single-sided swing arm, Girder fork, parts of a Golf 7 and can be driven on the road. Wimoto from the Netherlands plays the big motorcycle puzzle.

The original frame of the Honda CBX is not exactly known for its rigidity, the term folding hinge frame is coined here. In particular, the thin front fork in combination with the high engine weight is only something for Lowenherz drivers. Wido needs enormous stability for the attachment of two wheels mounted on one side with their correspondingly high torsional forces on the swing arm bearing and steering head, and for this the Honda frame has to be reinforced. The challenge is to keep these reinforcements invisible. Several chromoly pipes are welded in, creating a few extra triangles under the tank. 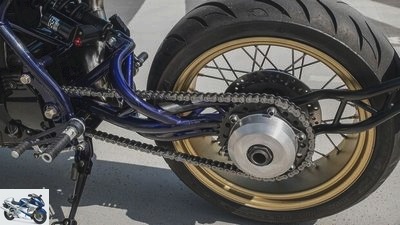 The hub of the GS is also used at the rear, but on the drive of a Honda VFR 750, which also takes over the braking system and the eccentric tensioning device for the chain.

The final drive of a Honda VFR 750 serves as the basis for the one-sided rear wheel suspension. The wheel hub of a BMW R 1200 GS with an 18 inch rim was adapted and spoked. Wimoto manufactures the swing arm itself on chromoly tubes. The YSS shock absorber is placed eccentrically, also to make room for the exhaust system. An exquisite powder coating provides the finish. 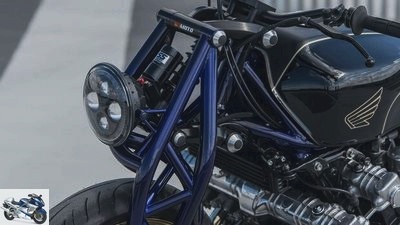 Wimoto builds the one-armed guide itself from chromoly tubes, the black fork bridge with aluminum struts are milled from one piece.

Trapeze fork based on the old model

The fork construction is based on the model of old trapezoidal or parallelogram forks that were installed on motorcycles between the 1920s and the beginning of the 1950s. Each manufacturer had a different name for the same, sometimes slightly different principle. The names therefore became known: Girder fork, Brampton fork, Druid fork, Girdraulic, Tiger fork and Webb fork. The construction in pressed steel on the many DKW models is likely to have been most widespread in Germany.

Too much for history, back to the future: The front fork of the CBX is designed according to the principle of the old trapezoidal fork, but as a single-arm version. Was it already on the Imme R100 in 1949, just not for very long. It is also made at Wimoto from chromoly tubes, and it also has a YSS shock absorber and an 18-inch rim with a GS hub. The extraordinary construction is almost crowned by the wheel hub of a VW Golf 7. The two triple trees and the trapezoidal struts are milled from high-strength aluminum. We know the perimeter brake, i.e. the giant disc with an internal caliper, from the Buell XB models. 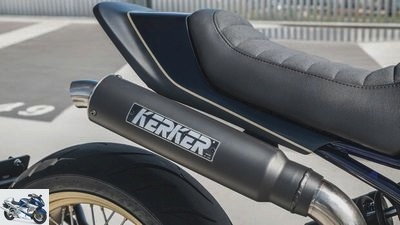 Wido places the dungeon silencer high up on the stern.

Honda story beyond the frame

Since Wido leaves nothing unchanged in the chassis and frame, the great Honda history of the 1970s and 1980s should be clearly visible in terms of bodywork. He leaves the tank of the CBX untouched and adapts an old Bol d’Or rear to the shortened rear frame. Wido up-dates the iconic rump with LED technology for lighting. Wido swings neatly next to the rear of the authentic dungeon muffler, which is already installed on the dispenser CBX.

“Madness skilfully made mobile” or “News from Krassistan”: Even under these headings, our story would be an excellent introduction. It is not the first such extreme new chassis from Wimoto, hopefully not the last and a six-cylinder is always allowed anyway.