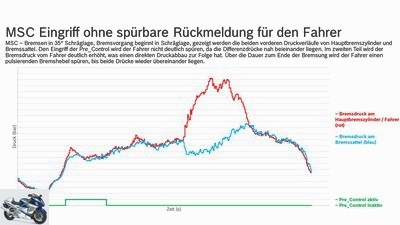 1/6
The so-called curve ABS at a slope of 35 degrees on dry asphalt. The driver brakes in an inclined position, the Pre-Control intervenes briefly to dampen a braking force peak unnoticed. The real intervention a little later is then clearly noticeable. 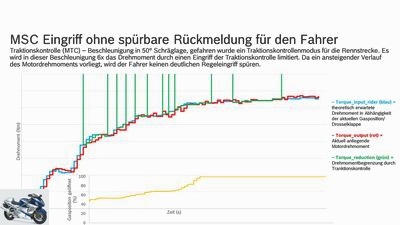 2/6
Temporal progression of an undetectable intervention by the MTC traction control at a 50 degree incline. During this time, the system regulates six times without the driver noticing. The system only ever reduces the torque slightly. 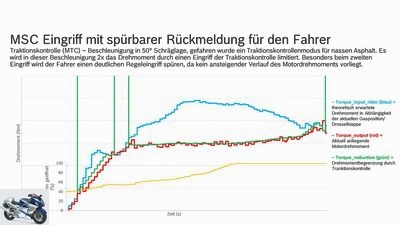 3/6
Here the MTC with the same lean angle when the tire suddenly starts slipping. Before that, the MTC has been regulating for a little longer, only the major intervention can be felt by the driver. Typical picture when the road is wet. 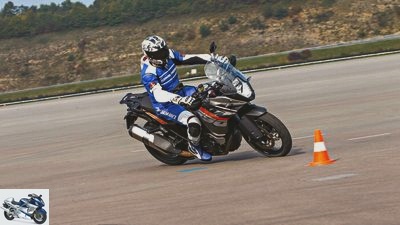 4/6
The main purpose of the MSC, commonly known as ABS cornering, is to intercept the turning front wheel when braking in an inclined position and to keep the motorcycle on course. 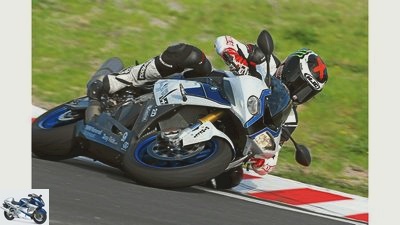 5/6
The system can prevent the front wheel from slipping even at high lean angles, but only if it is active and the driver builds up braking pressure. The system does not regulate itself yet. 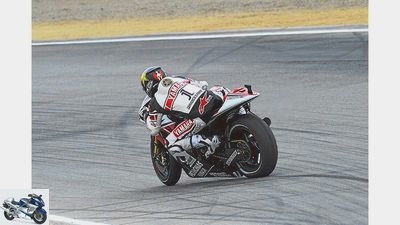 6/6
The lean-angle sensitive traction control is intended to prevent the so-called highsider in the most violent form. So when the rear wheel slips when accelerating in an inclined position, the shock absorber is compressed and when grip returns, the shock absorber suddenly rebounds.

Modern driving aids are always active
How often does the cornering ABS control?

Cornering ABS and traction control not only regulate when the bike is already slipping. The example of the Bosch MSC shows that the systems regulate long and often before the driver notices it.

Some people are familiar with the feeling of pulsating brake levers on a motorcycle when braking hard with ABS. The lack of propulsion and the flashing light in the cockpit signal when the throttle is used too hard: the traction control is working. Both driving situations are always at the end of a long chain of events and clearly say: Up to here and no further.

At the regulars table: “I’ve never used traction control and if you can brake properly, you don’t need ABS.” This self-assessment of the street heroes is often supported by statements such as “My wrist is the best traction control” or “sensitive fingers are the best anti-blocking system” added. Against the background of the control systems of the first generations with the sensitivity of a jackhammer, these perceptions are perhaps still understandable, but since even mid-range motorcycles have come up with modern lean angle-dependent systems (including from Bosch), the idea of ​​systems that regulate rarely or only in an emergency plain and simple wrong.

You rarely find the courage to simply apply the brakes in inclines of more than 35 degrees – quite jagged on the road. Anyone who has physically made friends with their lean angle-dependent braking system will only notice a pulsation on the hand and foot brake levers, the rear pulls slightly into the spring and the moped moves minimally around the vertical axis, sometimes angular impulses are felt in the handlebars. The bike decelerates quite strongly and stands up slowly and in a controlled manner. The dreaded turning brake steering torque does not occur: i.e. the front wheel is folded in towards the inside of the curve with the motorcycle suddenly standing up with an urge to face oncoming traffic or even the wheel slipping away. Loose thing. One thinks. 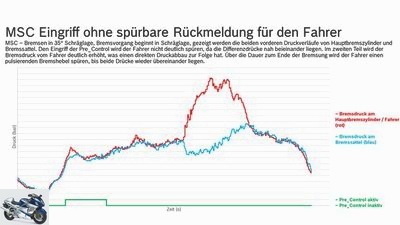 The so-called curve ABS at a slope of 35 degrees on dry asphalt. The driver brakes in an inclined position, the pre-control intervenes briefly to dampen a braking force peak unnoticed. The real intervention a little later is then clearly noticeable.

But in this entire process of just a few moments, the so-called cornering ABS does not only regulate in the noticeable situation. the Motorcycle Stability Control (MSC) from Bosch, in the KTM and Ducati series, among others, permanently balances the required brake pressure with the maximum transferable braking power and, if necessary, readjusts minimally. The driver does not notice anything. The brake pressure is built up further, but with these micro-controls the speed of the increase in braking force is reduced somewhat. This is what Bosch calls Pre-Control: It becomes active as soon as the driver builds up a certain brake pressure from a certain lean angle and regulates the brake pressure gradient when there are braking force peaks. So whenever the driver corrects with the brakes. With the main advantage that cornering and braking feel more harmonious, real intervention by the cornering ABS would lead to unrest here.

Modern ABS make use of a large number of parameters and work even before the tire’s grip limit is reached. This makes braking more harmonious and safer, especially in an inclined position: It is more difficult to regain grip on a skidding wheel when it is inclined than not to make it slip in the first place.

Traction control in action is a rare experience, on the road it represents the fine line between driving and taking off. Regulating traction control amounts to a sudden loss of power. As if the motorcycle were being braked with the throttle valve wide open. For the driver, there is a big difference between the expected acceleration and the actual acceleration. A one-time and severe cut in the power output? Understandable thought. 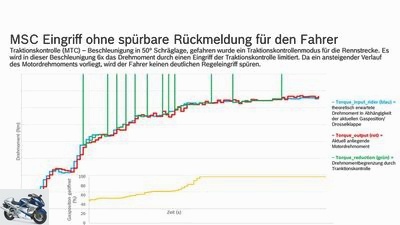 Temporal progression of an undetectable intervention by the MTC traction control at a 50 degree incline. During this time, the system regulates six times without the driver noticing. The system only ever reduces the torque slightly.

In an inclined position, however, such a short control behavior with a high number of repetitions would be very difficult for the driver to compensate, since the motorcycle would be subject to enormous load changes in the situation. In an inclined position there is a risk of suddenly falling into the curve. A preliminary stage is also used in the Motorcycle Traction Control (MTC) from Bosch, which is coupled to the MSC and therefore also works with lean angle sensitivity. The system permanently compares the torque required by the throttle grip with the optimal torque in this situation. That depends on the grip of the tire on the road and the lean angle driven. If there is a risk that the driver will use more power than the tire can transmit, the MTC will reduce the engine’s torque slightly. Technically, depending on the motorcycle manufacturer, the system intervenes in the throttle valve position or injection or shifts the ignition point slightly. The driver does not notice these interventions either, as the vehicle continues to accelerate. If the required engine power and the probable grip suddenly differ too much, i.e. if the tire starts to slip, the MTC intervenes with a hard cut in the torque until the wheel grips again. The driver notices this as described at the beginning: the power is throttled, the warning lamp in the cockpit lights up.

In the case of a fairly sporty 50 ° incline, the MTC already controls six times imperceptibly. But the MTC also intervenes here and there before the driver notices it, even on country roads and on a significantly less lean angle. But what would happen if the small interventions weren’t there? Then the risk of traction losses would be significantly higher, which would then have to be regulated hard again and cause strong load changes. So the system brings calm to the journey. As with ABS cornering: a sliding tire is more difficult to catch than preventing it from sliding in advance.

… from my machine and it already helped me.

… from my machine, but only on paper.

ABS and traction control bring safety to two-wheeled traffic. That is certain after more than 30 years of ABS. With the new lean angle sensitive systems, ABS and consequently traction control have developed enormously.

The Bosch MSC clearly shows that the systems ensure safety in the driving situation well before the control intervention is noticeable. The driver doesn’t feel it. This may obscure the actual explosiveness a little, but it ensures calm and stability, as the dynamics of the motorcycle are only minimally changed.

Only when that no longer helps do the systems regulate according to the familiar pattern with a pulsating lever or with reduced power.