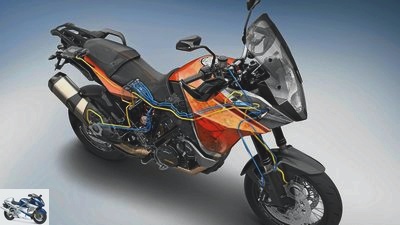 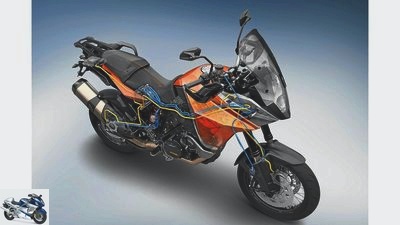 1/11
The schematic diagram shows the brake lines from the modulator to the wheel brake cylinders. 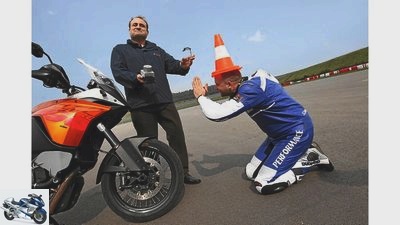 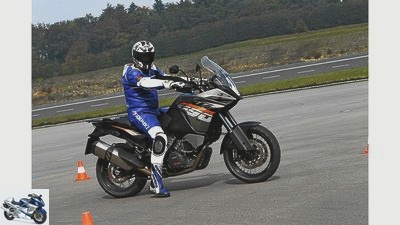 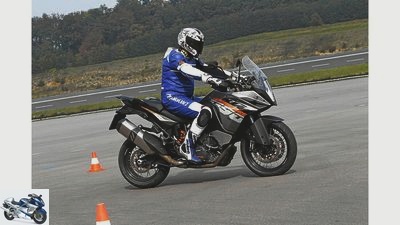 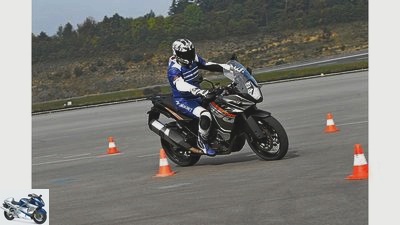 5/11
It doesn’t matter whether you brake at the front or the rear, … 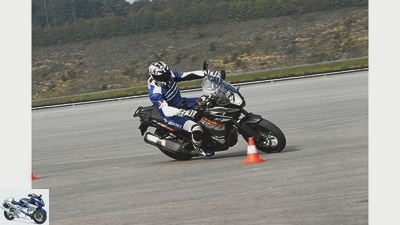 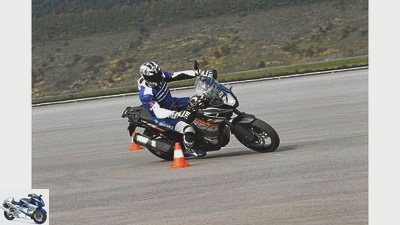 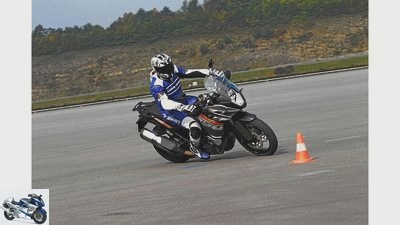 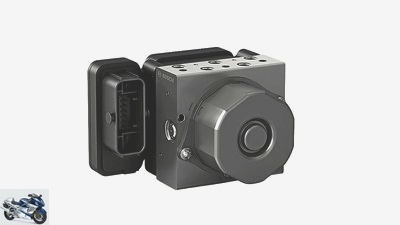 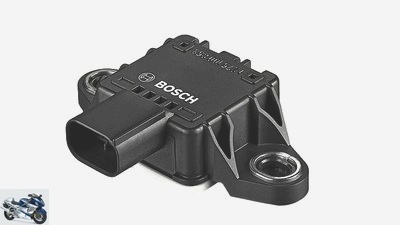 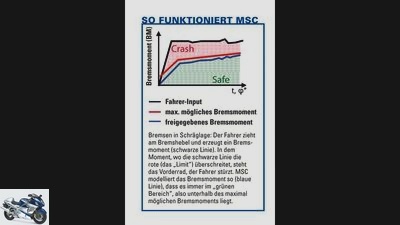 Cornering ABS MSC from Bosch in the test

Cornering ABS MSC from Bosch in the test
Braking in an inclined position without falling?

Braking hard in an inclined position overwhelms even MotoGP stars and often leads to falls. That changes with MSC, the Motorcycle Stability Control from Bosch. PS tested the new system on the KTM 1190 Adventure.

The man is wearing a scratched Swabian leather suit and tattered Daytona security boots. He wants to get me to turn into this pylon lane and turn on the front brake in a full lean angle. A mean smile accompanies his words. My first thought: He doesn’t have all the cups in the cupboard. Or the remaining cups all have a huge crack. But his eyes don’t sparkle with madness – no, his gaze is clear and focused, his voice steady. He is an engineer at Bosch, works in the two-wheeler safety division and his boss, Dr. Yildirim, is there too. Alright,
they can’t all be crazy in the club…


ABS put to the test

So I speed it up KTM 1190 Adventure to a good 60 things, turn into the approximately three meter wide pylon lane and pull the front brake with a cramped abdominal wall and the hair on the neck. I reckon with everything, see the KTM slip away with sparks, my collarbone burst, the pylons fling through the air. But nothing like that happens! The KTM decelerates more than expected, initially hardly stands up despite the lean angle and before I know it I have to take my feet off the pegs so as not to fall over while standing. craziness!!!

“And, was it bad?” The Bosch man in the station wagon, Christian Groger with his full name and one of the calibration engineers for the brand new MSC stability system, stands there and looks me in the eye expectantly. MSC stands for Motorcycle Stability Control. MSC is more than a regular ABS, but – to anticipate it right away – neither an electronic support wheel nor a 100% fall preventer. To understand how MSC works, you have to take some time. Basically and in a very simplified way, MSC works like a retrofittable traction control or the systems of the Kawasaki ZX-10 R or the Yamaha YZF-R1. And this is how they work: In the on-board electronics, slip monitoring department, a corridor is defined in which the rear wheel can accelerate. In order to recognize this, the electronics picks up the wheel speeds on the front and rear wheels, the gear selected, the throttle valve position, the engine speed and some other information.

Gyro sensor is the centerpiece

The on-board computer now compares this data with that of the programmed TC corridor. If everything is OK, i.e. if the slip on the rear wheel is in the green area, the acceleration continues. MSC acts in a similar way, only a little more complex. Because deceleration cannot be measured using the engine speed, but only recorded using a three-dimensional lean angle sensor, also known as a gyro sensor. This gyro is the heart of MSC. It measures the longitudinal, lateral and vertical speed of the motorcycle while driving and uses this to calculate the yaw and roll rates of the bike. This basic information is supplemented by other electronic values. Wheel speeds, gear position, brake pressure on the front and rear wheels are just a few of them. 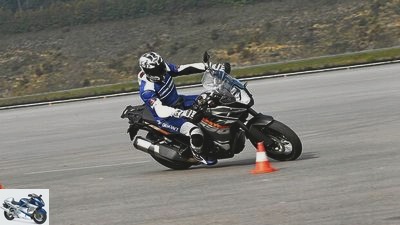 Regardless of whether you brake at the front or rear, MSC brings you to a standstill quickly.

While the sensors continuously supply data – the lean angle sensor, for example, records the lean angle and pitch angle of the motorcycle 100 times per second – the on-board computer has to work. This is where all the information comes together; this is where the comparison with the data that defines the “green area” takes place. In this green area, the motorcycle drives without falling. It is stored with every traction control, just like with the MSC. But how do the programmers know exactly where the limits of the green area are? Where is the limit? On the one hand, they get their knowledge from simulations on the mainframe, and on the other, of course, from test drives.

MSC, also known colloquially as “cornering ABS”, is a so-called “rigid system”. It makes a permanent comparison between the actual state (information from the sensors) and the target state, i.e. the values ​​that are stored in the system as limit values. The crux of the matter: a motorcycle on a lean angle is an incredibly complex overall system that is influenced by countless external factors. The link between the motorcycle and the road, the tire, is crucial. Because the tire contour, the rubber compound and the tire pressure have a major influence on the system. That’s why MSC works on the KTM 1190 Adventure and Adventure R models currently only with Continental tires as original equipment.

Brake pressure and the tendency to stand are reduced

Just unbelievable! That is the answer I gave to application engineer Groger. After careful approach and a short period of getting used to it, it is even fun to step into the iron in the large circular path with notches sanding over the asphalt. When the brakes are fully applied, the test KTM hardly stands up because the MSC uses the gyro sensor to detect how quickly the bike wants to stand up. Thereupon the brake pressure and thus the tendency to erect is reduced. 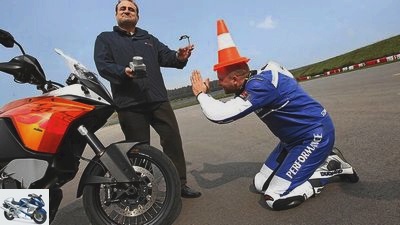 What a safety gain for us motorcyclists! On the flat surface of the Bosch test center in Boxberg, the sloping ABS delivered a very impressive performance. But let’s put the initial euphoria aside: MSC is not an invisible training wheel that can prevent every fall. Jumps in the coefficient of friction, i.e. gross differences in adhesion, such as those caused by road markings, manhole covers, oil stains or the like, will continue to lead to falls at a high incline. They simply cannot be recognized and calculated by the system. Everyday neglect can also dupe the system. For example, the air pressure in the front wheel is too low.

PS tried it out. We drove onto the large circular path with only 1.9 bar instead of the prescribed 2.5 bar in the front wheel and braked hard. With the result that once at around 64 km / h and once at around 70 km / h the front wheel locked and the situation became unstable and therefore dangerous. Since we were in a moderate lean angle, the front wheel did not fold in, but caught itself again.

Overall, the Bosch MSC is a very impressive safety and assistance system. And it is trend-setting, because after KTM, other manufacturers have already commissioned an MSC application from Bosch. And one more piece of good news: MSC can be attached to every KTM bought in 2013 1190 Adventure retrofit for 399 euros.