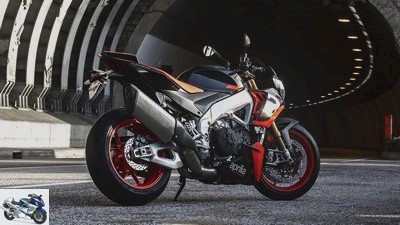 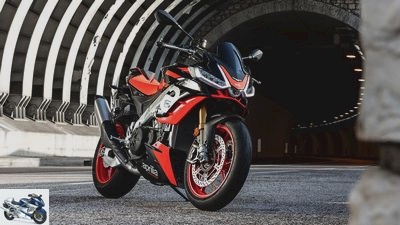 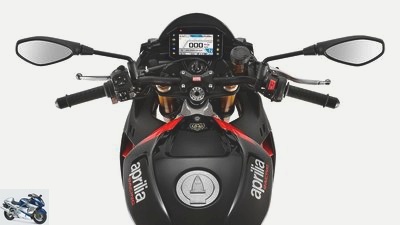 1/11
Experienced pilots may profit from the 48% stiffer swingarm. However, the general public is delighted by the noble item with chic photos in the paddock.

In the saddle you can enjoy the full torque of 121 Nm at 9,000 rpm. The maximum speed has been increased by 300 rpm compared to the previous model. 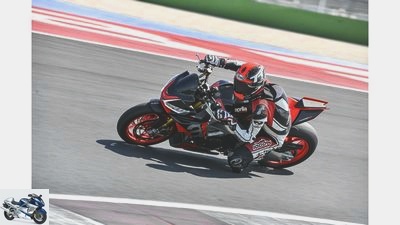 3/11
The resulting top speed of 270 km / h provides sufficient ammunition for regular discussions. The real advantages of the new ECU, however, lie in the even more precise engine response. 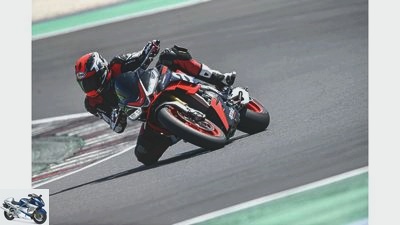 4/11
The sharp unit is attached directly to the gas and reacts in a flash to commands from the right hand. The torque output can also be precisely metered in radical race mode. The large V4 presents itself as an agile and sporty unit. 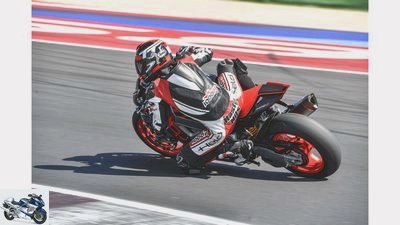 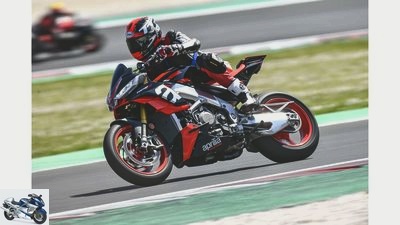 6/11
The braking and steering process is wonderfully smooth with the revised systems. As if you had mastered the game of clutch, double-declutching and rear brake perfectly in the saddle. 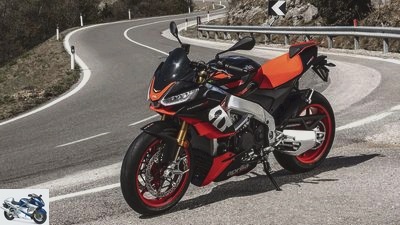 7/11
The Tuono’s entire arsenal of active driving safety systems has also been refreshed. The basis for this is the higher computing power of the new Marelli 11MP ECU and the new, six-axis IMU for calculating the lean angles.

8/11
The front fairing with LED headlights and cornering lights is based on the 660 Tuono.

9/11
However, the engine remains unchanged in terms of displacement and remains equally powerful. Even the typical V4 sound has not fallen victim to Euro-5.

10/11
There is a new TFT display in the cockpit so that the new electronics can be better monitored and adjusted. 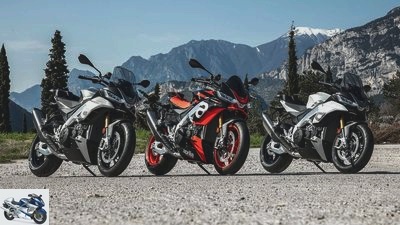 Aprilia will bring the Tuono V4 with higher handlebars and better wind protection in 2021. The motorcycle should appeal to touring riders. So the Tuono V4 Factory can stay what it is: a radically sharp and fast naked bike with superbike genes.

Presumably the new and strict Euro 5 rules were the reason for the upgrade of the new V4 Tuono models. But Aprilia has seized the opportunity and vigorously revised the Tuono V4. Even when it comes to fundamental issues, everything is new in 2021. The Tuono V4 is no longer just the cheaper version of the flagship “Factory ”. It was equipped with a higher windshield and offers a handlebar that is 20 mm higher. The passenger seat is also more comfortable. There the footrests have been mounted lower and the bench offers more comfort. Aprilia also offers a luggage system as an option.

The Tuono V4 is still cheaper. This is because, in contrast to the Factory, the electronic chassis from Ohlins is dispensed with. A mechanical chassis from Sachs is used. The Aprilia Tuono V4 1100 costs including VAT and ancillary costs from 17,490 euros, the Tuono V4 1100 Factory is in the price list from 20,990 euros. The Factory remains the more expensive variant and is also the model with the sharper image. It is still the naked bike that comes closest to the Superbike sister model. In 2021, for example, the swing arm was also taken over by the RSV4.

Experienced pilots may profit from the 48% stiffer swingarm. However, the general public is delighted with the noble item when it comes to chic photos in the paddock. However, the advantages that the upgraded ECU and connected driving aids bring with it are clearly understandable. The 11MP Marelli ECU brings neither more power nor more torque. In the current Euro 5 configuration, the engine still generates 175 hp at 11,350 rpm from a displacement of 1,077 cubic centimeters. In the saddle you can enjoy the full torque of 121 Nm at 9,000 rpm. The maximum speed has been increased by 300 rpm compared to the previous model. The resulting top speed of 270 km / h provides sufficient ammunition for regular discussions.

The real advantages of the new ECU, however, lie in the even more precise engine response. The sharp unit is attached directly to the gas and reacts in a flash to commands from the right hand. The torque output can also be precisely metered in radical race mode. The large V4 presents itself as an agile and sporty unit. Compared to the RSV4 sister model, the engine set-up, including a shorter gear ratio, ensures more pressure at low speeds. The AEB engine brake control also works really well. This can be set in 3 stages. In level 3, it also offers control interventions in an inclined position and ensures a precise and stable rear wheel at the entrance to the curve. The braking and steering process is now wonderfully smooth. It’s like being in the saddle perfectly mastering the game of clutch, double-declutching and rear brake. 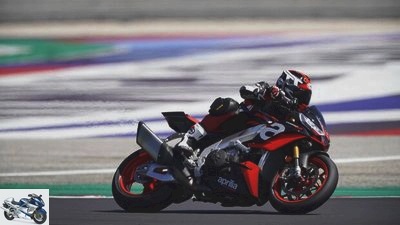 The great strength of the Aprilia Tuono V4 Factory remained with the motorcycle. It gives the driver a lot of confidence in the front wheel and it is easy to hit the line precisely. The handlebars are wide, the seating position is upright, but the sporty motorcycle offers stable handling. This is certainly made possible by the high-quality electronics. At the exit of the bend, the electronic anti-wheelie control stops precisely a few millimeters above the asphalt. The wheelie feels harmonious and natural in the saddle. The acceleration never comes across as foam-braked, but always brutal but predictable.

Aprilia offers six different riding modes for the Aprilia Tuono V4 2021. Whereby these are divided into 2 areas of application. Two predefined setups and an individually configurable setup are available for the road. A permanently installed setup and two individually adaptable driving modes are available for the racetrack. The individual driving modes are equipped with the appropriate algorithms for the electronic driving aids. New in 2021: The upgraded electronics now regulate the engine braking effect just as much depending on the lean angle as the ABS and traction control. The Tuono Factory looks threatening and aggressive, but the all-round successful electronics package makes it a pleasant motorcycle to drive. 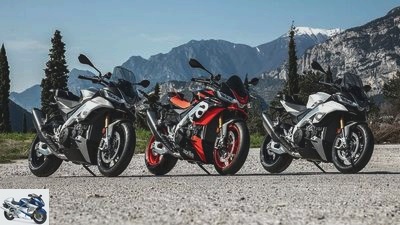 The challenging Euro 5 requirements made the motorcycle heavier overall, but Aprilia was able to save the weight by using a lighter lithium battery. In the end, Aprilia still gives 209 kg with 90% tank capacity as weight.

The RSV in the Tuono

Following the long tradition, the new Tuono V4 Factory has also adopted a large part of the design components from the super sporty RSV4. The tank, seat and rear section are shared with the Superbike sister and underline the close relationship and sporty attitude of the Tuono. The Tuono V4 Factory gets the same rear as the RSV4, with the pillion seat cover and the high-positioned footrests emphasizing the sporty note even more. When it comes to electronics, too, you can rely on the high-quality superbike hardware and software of the RSV4. The so-called APRC suite receives an update with new operating logic which is also used in the 2021 RSV4.

Satisfied pilots at a factory will generally be satisfied again with the successor. The seating position remained the same, the chassis setup remained the same and the character of the motorcycle remained unchanged. The new ECU now enables not only lower pollutant emissions, but also an even finer response.

The upgraded driving aids are also convincing in practice. Die-hard Tuono fans will probably only consider that “Factory ”as the only true Tuono. But with the new positioning of the Tuono V4, it is now open to a new target group. The factory remains as it is: a lightning-fast naked bike that offers a lot of riding fun.