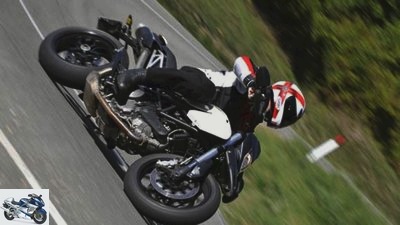 Enthusiastic shapes, great 1100 V2, that’s how people knew the Hypermotard. A motorcycle to set the street on fire. Now Ducati is adding a variant with a smaller displacement.

“Grazie Troy Thank you Troy” is emblazoned in huge letters on the Ducati factory in Borgo Panigale. Greetings to 2008 Superbike World Champion, Australian Troy Bayliss. Racing is Ducati’s domain. But because not every Ducatista seeks his salvation in knee grinding, expands Ducati has been expanding its range of everyday machines for years. The latest design: the Hypermotard 796. “Oh no, there is not just a 696 engine with more stroke in it,” says press officer Francesco Rapisarda. A completely new engine has been designed. As with the superbikes, the housing is now manufactured using the vacuum casting process, which saves around 1.2 kilograms in weight. Bore and stroke correspond to those of the older Monster 800, which means 803 cm3 displacement. The crankshaft carries a light flywheel of the 848. The heads and camshafts, on the other hand, come from the current Monster 696. Only the pistons, which ensure a compression of 11: 1 and thus the highest among Ducati two-valve models to date, are new. 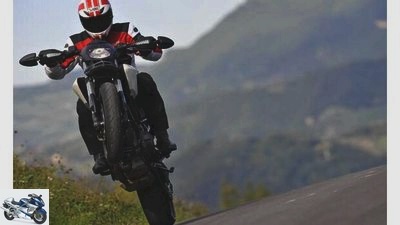 Overall, the 796 should be twelve kilograms lighter than the 1100. Six of these are to be attributable to the engine and peripherals, such as the exhaust system, which is equipped with one lambda probe per cylinder. It does without an exhaust flap and its front silencer nestles elegantly under the engine. Any more news? Please. The frame was lightened in the rear area with unchanged stiffness. The same goes for the fork, which uses 43 mm immersion tubes (1100: 50 mm) and has more delicate fork feet. Which together with the new triple clamps should save a further six kilograms on the chassis. Ducati promises 167 kilograms dry. The first contact begins with a pleasant surprise. Because the 845 millimeter seat height of the Hypermotard 1100 is not for everyone, Ducati is bringing the 796 driver about 20 millimeters closer to the ground using a modified seat. Turning around and feeling out of the factory premises is therefore possible with safe feet and without wobbling on tiptoe. The clutch is as smooth as butter, the gears engage over short distances in a somewhat bony, but secure manner. So we thread our way through Bologna’s full streets, out of the city and into the northern Apennines. The mountain range, criss-crossed by an inextricable network of small, winding streets is great terrain for the youngest Ducati offspring. Here, where one curve merges seamlessly into the other and straight lines are rarely longer than a few hundred meters, the 796 shows its very agile side. With a light hand it can be flicked from one inclined position to the next, so that the low weight figure appears absolutely believable. In addition, the steering geometry, which is designed for maneuverability, with a 66 degree steering head angle and 100 millimeters of caster, inspires handling. It comes from the 1100s. Which is why it is not surprising that the 796 shows similarities to its big sister when it comes to driving behavior. The 796 pulls its course smoothly on well-leveled slopes, the Bridgestone BT 16 with the special code “U” provide plenty of grip even on steep inclines. Brakes in inclined positions, however, as well as bumps and bumps that cross the track when sweeping curves, ensure a righting moment. For sporty natures, it should therefore be a good shot of stability, especially on secondary roads. After all, the 796, with its softly tuned, finely appealing fork and the stiff shock absorber, offers decent comfort even on exhausted slopes. In addition, the brakes cut an excellent figure. Far from being as toxic in the first grab as the stoppers of the Hypermotard 1100 S, they are always in control of the situation and can be dosed cleanly, even with two fingers. This also applies when the speed is increased and the engine is let off the leash on the angled paths. The two-valve engine likes the action more than just strolling around. If he shakes himself noticeably below 4000 rpm when accelerating, especially in large gears with a restrained temperament, he wakes up when this mark is reached. Then life comes into the two cylinders, then the load change reactions fit and it hangs neatly on the gas. He wants to be onions, which also means the relaxed seating position, thanks to the changed seat contour, you no longer slide so strongly towards the tank and go well with the agile chassis. From 6500 rpm he adds another briquette, but also because of vibrations. Cheers without complaint up to the highest altitudes, without ambush-like performance. The little guy sounds very dry and robust. And if the gears are jagged downwards before the next bend, the APTC clutch, which effectively combines anti-hopping and servo functions to reduce manual effort, keeps the rear wheel in check. The price remains. 8895 euros are not a special offer. Especially without ABS, which is not expected to come until 2011. And even the typical Ducati red costs 300 euros extra. The fascinating shapes come into their own even without red. 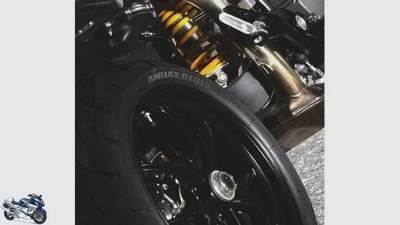 The single-sided swing arm also adorns the 796, there is no height adjustment on the strut deflection.

Negative:
-Equipment not particularly opulent
-Driving behavior should be more stable on uneven terrain
-Running smoothness could be better below 4000 rpm 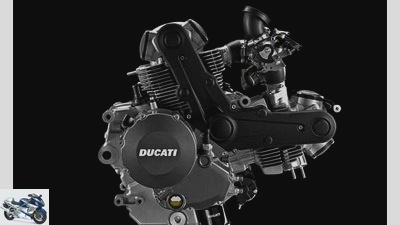