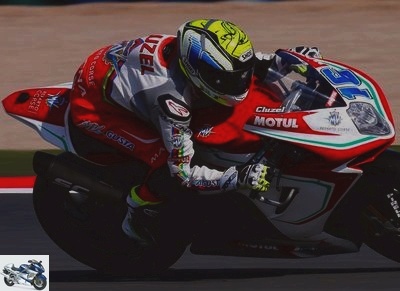 Absent from the French World Supersport event – and deprived of a title? – last year because of his crash at Jerez, Jules Cluzel rode like a champion this midday at Magny-Cours. Kenan Sofuoglu on the contrary failed: his fifth coronation will wait…

On the descent to 180 °, Jacobsen bites the dust and has to give up! Our national "Julo", on the contrary, is in great shape and overtakes Rea before the end of the first round. F3 n ° 16 is half a second behind Ninja n ° 1 at the start of the 2nd lap, but manages to get back on it.

On the 3rd lap, the peloton led by Jules joined Kenan. The teammate of the quadruple Turkish champion – soon quintuple ?! -, Randy Krummenacher, is precisely at the back of the peloton (8th position), more than 2.5 seconds from his target. 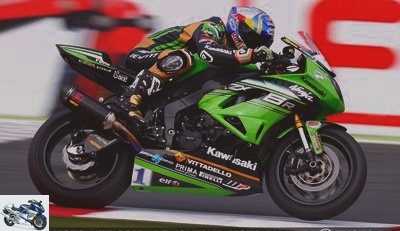 Sofuoglu may well post the fastest lap in the race in the next loop, Cluzel does not let himself be left behind. Ayrton Badovini and his Honda are still in Jules’ wake and his MV, Gino Rea and his Triumph are also on the lookout.

Niki Tuuli, the Finnish author of his first world podium in Germany, breaks Kenan’s record in the following lap: fifth, Niki climbs on Gino and moves away from Illia Mykhalchyk. Caricasulo and Krummenacher roll half a second behind the Ukrainian driver. Cedric Tangre occupies 17th place.

On the eighth passage through Adelaide, Rea tries to overtake Badovini but the two motorcycles touch each other at the exit of the hairpin! Undoubtedly disappointed, not to say frustrated, Gino puts too much angle in the 180 °, loses the rear and leaves in a funny highside, his buttocks not really leaving his Daytona remained on the ground…

Acclaimed by his audience, Julo does not leave the rear wheel of the Ninja No.1. In Adelaide, the clamor of the public is such that Kenan turns around and realizes that two pilots follow his rhythm: Cluzel and Tuuli! Bassani and Badovini disappear in the background.

Niki tries an attack in Adelaide on Jules in the 11th lap but the Yamaha rider is dismissed by the official MV Agusta. The latter raises his hand at the exit of the pin … But he apologizes, or does he ask his young opponent to calm things down a bit ?

Maintained under pressure by Cluzel since the first laps, Kenan Sofuoglu asks too much of his Pirelli in Estoril and falls! His Kawasaki goes to the bottom of the gravel pit and will not leave … The coronation of the Turkish champion will have to wait two weeks. Krummenacher still fifth stands at 42 points in the provisional.

In front, Cluzel misses the exit from Adelaide and hands over the reins of the race to Tuuli. Our compatriot whips his F3 to pick up the leading R6 … and maintain a good gap on Bassani’s ZX-6R and Badovini’s CBR. Krummenacher is two seconds behind the Italians and runs at the same pace.

With five laps to go, Tuuli accelerates again, setting a new lap record. Cluzel did not give up and rolled several lengths behind the phenomenal Finnish. The gaps between the first four riders are reduced at the end of the 16th loop … Krummenacher nibbles a few tenths. 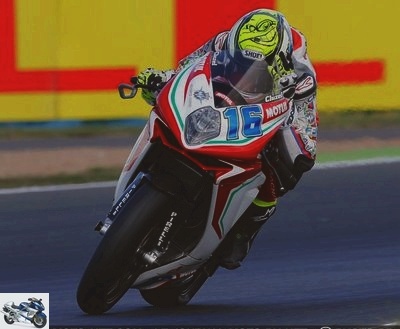 Jules launches into the penultimate lap in Tuuli’s wheel, but he must always be wary of Badovini and Bassani. Difficult for "Julo" to defend his position while looking for an opening on the leader of the race! Does the French wait for the last round to carry the decisive attack ?

In Niki’s aspiration at the exit of Estoril, Jules plants a magnificent braking in Adelaide and turns in the lead under the cheers of his fans! Factory pilot MV Agusta firmly shuts all doors in the face of Tuuli, now threatened by Badovini and secures a superb victory, his second of the 2016 season.

Our "Coq Supersportif" took advantage of his success and the fall of the American Jacobsen to climb to third place in the championship: 116 points for Jules against 109 for PJ. Randy Krummenacher is now the only driver to be able to prevent the fifth coronation of his teammate Kenan Sofuoglu: two races from the end of the airlock, the Swiss "rookie" is 42 points behind the Turkish champion… 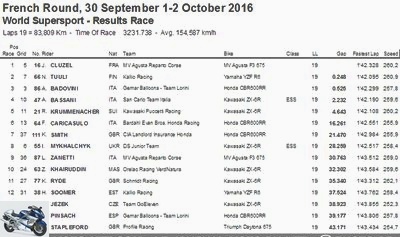 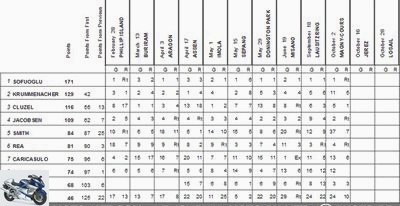