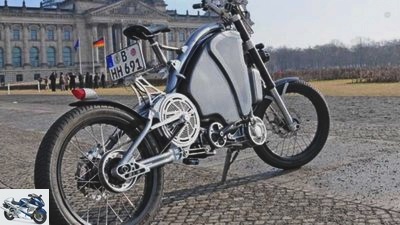 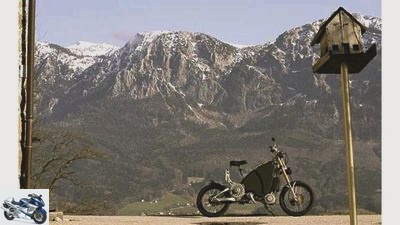 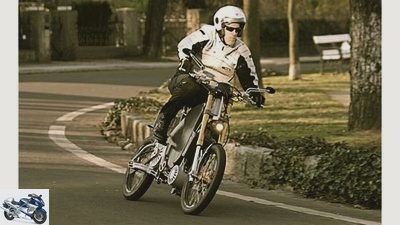 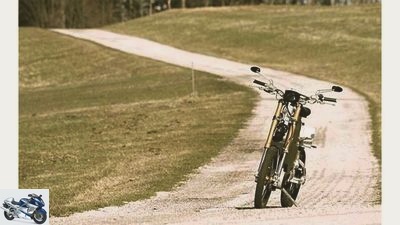 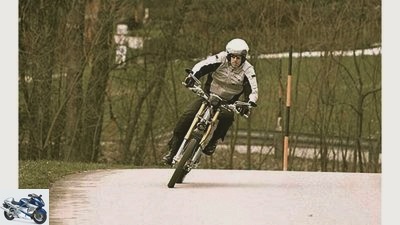 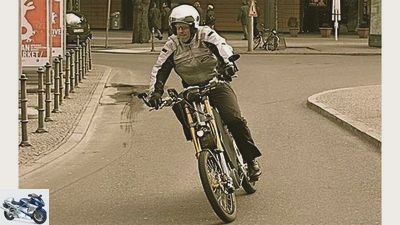 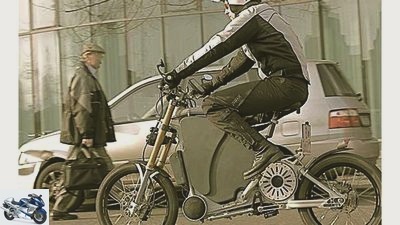 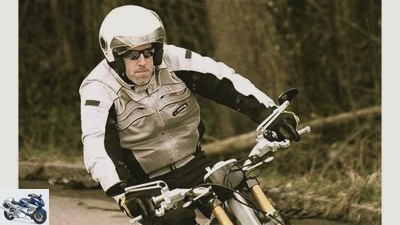 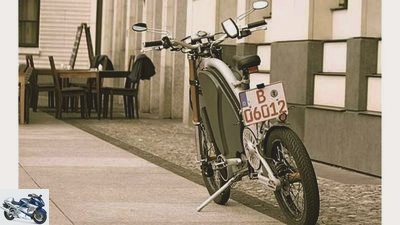 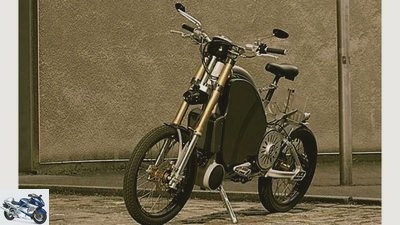 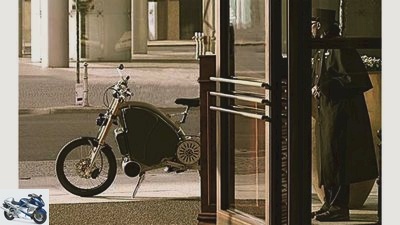 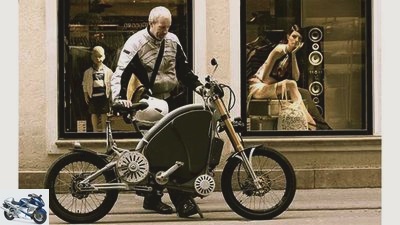 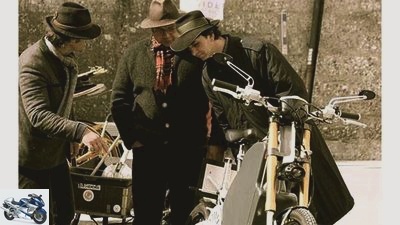 You have to pedal on the eROCKIT like on a bike, sit raised like on an enduro and enjoy more attention than with any Harley.

The other day next to the new synagogue in Berlin’s Oranienburger Strasse: No sooner have you unfolded the side stand of the eROCKIT than two patrolmen jump over to it. Parked the wrong way, drove over the sidewalk? What. The electric motorcycle that rides like a bicycle attracts the attention of law enforcement officers. “Is that the part from the television ??? asks one of the two officers. Yes, exactly. The policeman drives a motorcycle privately, she thinks “Idea great”, Combine machine and muscle power.

So quickly turned a lap of honor with the eye-catcher. When moving off, the scooter requires a bit of concentration without the throttle grip. One foot is already on the pedal, with the other you are still supporting the high bike ?? Seat height 93 centimeters. And while you’re still busy with keeping your balance, the thing is already making a good leap forward. A whopping 75 Newton meters practically from a standstill. Hui, that works. Just different. After all, here the crank takes over the command of speed and power. The pedaling power does not go to the rear wheel, but drives a generator. The control unit translates its rotation into the power output of the 8.6 kilowatt electric motor. The generator also extends the range: it charges the 336 lithium-ion batteries while driving. They lie as an energy pack weighing 35 kilograms under the high, up to 18 centimeter wide box made of aramid-reinforced carbon fiber. Sounds complicated? Oh no. Pedaling slowly means rolling gently, pedaling faster means more power. If you do this from a standing start, the electric motor reacts with a minimal delay. Feels like a rear wheel spinning slightly. No more pedaling means rolling out gently.

Like now, back to the law enforcement officer. “That speeds up a lot”, is his comment. It’s correct. And yet it is the result of an illusion. Because 4.5 seconds for the sprint from zero to 50 km / h, measured by GPS, correspond exactly to the level of a throttled Yamaha YZF-R 125. Only the eROCKIT moves completely silently from the spot. And the spectacular pedaling makes passers-by believe that Superman is pedaling here personally. Pah, who is Erik Zabel? Being quick is not a question of hardened thighs. With the two prototypes, however, the generator’s charging function does not yet work; the cadence is used solely to control the engine output. This is only to be the case with the ten series machines that are planned for the second half of 2009. With them, more powerful pedaling will also tease out higher performance from the electric motor. Currently, the rhythmic ups and downs of the pedals feel more like the easiest step on an exercise bike. Everyone can do this very easily. Anyone who can ride a bike can also ride an eROCKIT intuitively.

Well, at least under certain conditions. Because the approval as a light motorcycle requires a motorcycle driving license of class A1. Or a car driver’s license, if it was issued before April 1, 1980. The serial human-machine hybrid is extremely communicative. Whether tourists from all over the world at the Brandenburg Gate or participants wearing ties at an innovation conference at Potsdamer Platz: the extravagant vehicle is causing quite a stir everywhere. People even follow you into the cafe: ?? Is that your vehicle out there ??? Stefan Gulas, owner and builder of the eROCKIT, always has plenty of business cards ready for these cases. Still, the metropolis is calling. Motto:? Give electricity ??, accelerating is not possible. You have never seen Berlin like this before. Guaranteed. The capital is shrinking, 20 kilometers are nothing. Show factor: immense. Driving pleasure: enormous. Perceived speed: high. The promised 80 km / h top speed doesn’t exactly tear the tar, but allows you to drive on expressways. Measured later it is real 73, with already quite empty batteries.

And the kicking? On the one hand it makes driving highly emotional, on the other hand you forget it at some point when driving at constant speed, really true. Instead, the focus is on sightseeing. The high, raised seating position provides the best overview of all attractions. And drivers. The overtaken look in disbelief. At every traffic light, thumbs up and windows go down: ?? What is that ??? Most of the time, the car drivers are so taken aback that they politely let the e-bike go first. If not, the ?? human hybrid ?? (Stefan Gulas) easy to the very front. The wide, butted enduro handlebars can be playfully directed, like a mountain bike that is a little too heavy. You drive the proverbial circles around the tin cans. The vehicle weighs 114 kilograms, in which, in addition to the crank, only the hard, narrow leather saddle comes from the bicycle. Unfortunately, it offers very little comfort.

There are many motorcycle genes in the unconventional construction: upside-down fork, rims and four-piston brakes with wave discs were donated by an 80s crosser. The spring elements are fully adjustable, but the fork, which has been shortened from 280 to 120 millimeters of spring travel, should respond more finely, its breakaway torque is high. The lying Fox shock absorber, which is subjected to pressure by deflection, is of the hard type. It relentlessly communicates potholes and manhole covers. The separately adjustable high / low-speed compression damping does not change anything. Serpentines are not a thing of the past in Berlin, but in long curves, such as just before the Chancellery or around the Victory Column, you can pedal smoothly even in an inclined position, the crank is that high. The narrow, light Metzeler ME 22 tires adhere well even at temperatures around freezing point. The brakes should grip more crisply. The left hand lever of the noble fittings decelerates in front. He combines high hand strength with moderate effect, you have to pull like an ox. The rear stop operated by the right hand provides little support. 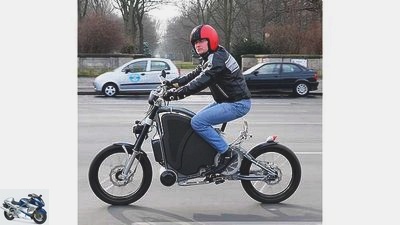 Out. After 55 kilometers of driving in the city, the electricity runs out. The cold costs battery capacity, especially since the braking energy recovery on the rear wheel, which can otherwise be activated via a third hand lever, is switched off for safety’s sake at the prevailing temperatures below five degrees. As already mentioned, the same applies to charging the batteries by pedaling. In better conditions, a range of 60 to 80 kilometers would allegedly be realistic. Electricity costs per 100 kilometers: around one euro. Starting this spring, everyone can test it out on the eROCKIT on half-day tours in the capital; at a price of 290 euros they lead past the most important sights.

The specially manufactured assemblies of the Berliner Kindl testify to great attention to detail and fine workmanship: fine milling work, CNC-manufactured swing arm and precisely laminated carbon parts. The cool car costs a proud 28,900 euros. No wonder, given the effort: ten people have been working on the innovative vehicle concept for years. You put a machine park in the workshop, buy parts? the batteries alone cost 5000 euros? turning, milling and drilling (see MOTORRAD 4/2009). Even the price of a Honda Gold Wing is unlikely to cover the start-up costs. So, if you have one wish: drive an eROCKIT for a week in Berlin. A truly unique, electrifying experience that you won’t soon forget.