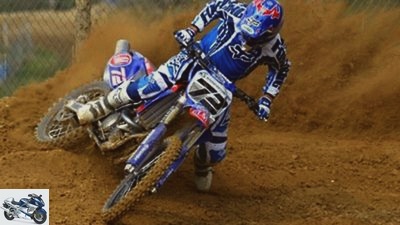 Call from the Yamaha headquarters: “Send someone to Asti, you can with Everts ?? Drive factory machines! «A downright heavenly job, no real cross-freak would ask twice.

In the early 1970s, an unknown sprayer sprayed the famous phrase on a London house wall: “Clapton is god.” “Wrong, God doesn’t play the guitar,” someone added. Probably true, and God certainly doesn’t ride motocross. But never mind, the cross scene has had its own god since this season at the latest: Stefan Everts. The Belgian achieved something unearthly in 2003: the seventh world title made him immortal, and he also became vice-champion in the small class.
Everts himself has undoubtedly played the largest part in these successes. What part were prepared by the Rinaldi team
Yamaha contributed, MOTORRAD was able to find out on the mountain-and-valley railway in Asti, Italy. The factory machine YZ 450 FM for the new MotocrossGP class (MXGP) and the YZ 250 F for the small class were at the start. However, the tools are no longer as glamorous as they were in the past, technology freaks are looking in vain for aluminum frames, milled crankcases or carbon fiber frame rear ends.
The chassis of the 450 is simply based on a standard frame. The oil connections are welded shut because the engine was converted to a wet sump. The rear frame, swing arm and the rear suspension levers are also standard parts. The swing arm was extended by around 20 millimeters during the season in order to get more traction at the start. When it comes to suspension, top crossers don’t compromise, as genuine factory parts from Kayaba have to be found. This year the fork grew from 48 to 50 millimeters, and the team made the bridges itself. While the Rinaldi mechanics willingly provide information on these points, they suddenly fall silent when asked about engine data. Bore and stroke? Titanium connecting rods? Valve sizes? No comment. After all, the displacement puzzle that was common in the past is over: 450 cc is the limit for all four-stroke engines in the MXGP class.
But now it’s time to kick, a fantastic slope awaits hand-picked journalists. The automatic deco is still active, the YZ 450 FM also has a deco lever on the handlebar. Which is usually superfluous, because after a few kicks the factory machine starts up without any problems. Already in the paddock it is noticeable how gently the clutch engages in contrast to the rough series counterpart. A Hinson basket and the hydraulic actuation built by the team contribute to this.
First of all, a very careful introductory round. Oops, the front wheel almost slipped on the first downhill section. The front beryllium brake is extremely snappy and requires getting used to. After a few laps and at a more brisk pace, you can feel the transparent feedback and the excellent controllability of the Brembo stopper. An anti-hopping clutch is intended to limit the braking torque. In order to use their advantages, you have to drive hard at the limit.
The suspension earns less hymns of praise from the journalists. The fork pumps, the handlebars hit the undulating sections downhill. Isn’t it because the suspension? as expected ?? is extremely hard, but on the contrary due to a lazy cushioning. Everts ?? Mr. Smooth ?? With its unique, soft driving style, it can afford to drive with little rebound damping despite insane speeds. He wears his
Machine literally over the holes and shafts. Less talented contemporaries need significantly more firmness and reserves. On the other hand, you like the sensitive hindquarters when accelerating, this is how you imagine a factory suspension.
The 450 single-cylinder ensures unrestricted enthusiasm. With a full thrust it starts right at the bottom of the speed range, revs up more evenly than the aggressive series engine and does not buckle beyond the rated speed. Rinaldi gives 58 hp, so six, seven more than in the series, which seems plausible. Of course, an amateur doesn’t need that much pressure from the top, but the steady thrust would also do a standard YZ-F well, especially since the YZ-FM is extremely easy to control. With last year’s monster machine from the big class
the current 450 no longer
much in common. Vibrations are because of
lack of balance shaft and the harder running engine inevitably stronger than with the base engine.
Much closer to the series is
the YZ 250 F, with which Stefan won eight of nine races in the 125cc class, where 125cc two-stroke engines
start against 250cc four-stroke engines. While Andrea Bartolini and Alessio Chiodi piloted the official factory equipment here, Rinaldi built a machine in the middle of the season using commercially available kit parts and last year’s suspension components.
The kit 250 is ?? how should it be any different in the small class? ?? uncompromisingly designed for more power. Only at 14500 revolutions, i.e. 1000 rpm above series level, is the end. Until then, the 41 hp single, according to the team, shows no signs of weakness. The downside: The thrust in the middle area is no longer quite as strong, the tuned YZ always needs a lot of speed. As with the 450, the chassis is specially designed for Stefan.
With the difference that the 250s the
The suspension is much less loaded than the large machine with its power and greater braking torque.
Both make of mediocre drivers Yamaha so certainly not world champions. For this they offer an end-
experts like Everts had the opportunity to optimally implement their skills.

Stefan Everts (right), the most successful cross-rider of all time with seven world championship titles, in conversation with editor Gert Thole

The 2003 season didn’t start off perfectly for you. I was too dogged in the first few races and wanted too much. That put me under enormous pressure. That’s why I always got big arms. This is a pure mental story. You have to drive easily, otherwise you will cramp up. Mickael Pichon initially seemed superior in the MXGP class. Think? Not at all. His speed didn’t worry me, least of all his big sayings. All bluff. I always knew that the mediocre results were up to me, that I could beat him. The turning point was the race in Italy with the double victory when I started in two classes for the first time. Back then, I really only started in the small class to warm up for the MXGP race and to clear my head. Are you annoyed that you didn’t start in both classes earlier? Then you would have eight instead of seven world titles. That doesn’t bother me at all. The small class should actually be reserved for young drivers. I give Steve Ramon the title. This year’s 450 is pretty close to the series. Isn’t that a handicap? On the contrary. We have made great strides with the aluminum frame compared to last year’s YZ 500 FM. It is also an advantage that all four-stroke engines in the MXGP class now have the same cubic capacity. That was more difficult in the big class last year, the base was a 450 cc. We have further improvements in mind for the next season that we will test soon. It pays off to work with the same team for years. The constellation couldn’t be better. Did you use the engine from last year in the large class up to 650 cc when you achieved the historic triple victory at the season finale? No, it all came about very quickly. I wanted to have the same feeling as possible as with the 450, so the engine was just drilled out a little. Before the race, I didn’t drive a single meter on the machine. You have now achieved everything in cross and are the best driver of all time. What else motivates you? It’s simple: I want to win! Next year there will be new challenges: Smets on the 450cc Suzuki, Pichon maybe drives a four-stroke Honda. I want the races to be under control for the whole season. You visited Pit Beirer shortly after his serious accident in the hospital? No, unfortunately that didn’t work out. When I was in Germany, he was operated on for the second time. Pit was, no, is a really good friend. I’m happy that he’s coping so well with his injury. His fate was a great shock. But danger is part of our sport. When you’re at the start, your mind has to be clear. Like many other stars, you live in Monaco. Sure, first of all there are financial reasons, and secondly, I have my peace and quiet there. There is always a lot of excitement around me in Belgium. But mostly I’m on the road with the team anyway. When you were with Honda, you had an NSX in your garage. Which car do you drive now? I don’t care about status symbols, I earn well and invest my money wisely. The NSX was great ?? and cheap. At the moment I drive a very reasonable family car, a BMW M3.