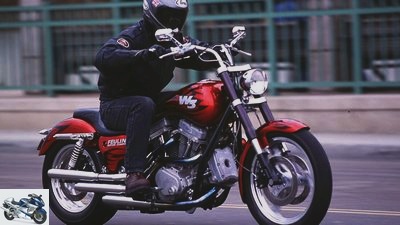 BMW is thinking out loud again about a cruiser model. Unusual solutions are obviously also being considered (see MOTORRAD 8/2015). About a three-cylinder engine in a W configuration. This unconventional engine design is not that new at all, after all, Jim Feuling built an American Long&Low-bike with three cylinders in W-formation.

Even in the early years of the motorcycle, there were some attempts to use W3 engines. Moto Guzzi built a prototype 30 years ago – and now BMW? Before BMW could possibly revive the cruiser market with a W3 bike, it is worth looking back at the Feuling W3, the first really commercially available two-wheeler with this drive configuration. California at the turn of the millennium. There MOTORRAD correspondent Alan Cathcart met Jim Feuling. He had just produced the first motorcycles with its W3 drive.

Just a crazy idea or true engineering? Probably a mixture of both. However: Feuling knew exactly what he was doing. Since 1974 he has worked as a development service provider for the automotive industry. Feuling also knew very well how to use the throttle. He sets numerous speed records on the salt flats of Bonneville. Almost 540 km / h with a motorcycle streamliner is impressive. Feuling said: “Motorcycles are my hobby, cars are my business.”

Until 1998 Harley-Davidson approached the tinkerer. During the tests with the then new Twin Cam 88 engine, there were severe heat problems. Feuling locked himself in his “garage” and solved the problem with larger cooling fins, modified exhaust valves and modified channels. And when the Harley V2 was open in front of him, the idea occurred to him: Why not screw on a cylinder more, from which a 45-degree V-engine can be built into a W3 engine with a 90-degree cylinder angle? Not a bad consideration, actually. With this Feuling also presented directly to Harley. They showed interest there, but the offer from Milwaukee did not even cover the basic investment by Feuling. He canceled, the relationship with Harley had died. And Feuling got to work himself. After all, with the Harley solution, only ten new parts would have been enough to turn the V2 into one W3 to construct.

Since Feuling had to do it himself, the construction was more complex, but still followed the maxim of keeping everything as simple as possible. The individual cubicles are built up in a square manner. In cylinder liners with a diameter of 101.6 mm, the main connecting rod has a 101.6 mm stroke, the auxiliary connecting rods slightly less. To prevent the engine from being too wide, Feuling relied on a solution with only one crank pin and only one main connecting rod to which the connecting rods for cylinders one and three are directly attached. A solution like the one used in radial engines. The performance figures show that the overall package was right: the developed from 2472 cm³ Feuling W3 more than 150 hp and 236 Nm.

And how does it go? Like the ride on Munchhausen’s cannonball! Once the left hand has pulled the not exactly smooth clutch and the left foot has pushed in first gear, there is no stopping it. Like a dragster, the Feuling pushes you forward. And very emphatically. Despite a long wheelbase of 1753 millimeters, the front wheel only prances around gently on the road when fully loaded in the lower aisles, and even loses contact with the ground several times. Hayabusa and Co. can pack up there.

Every traffic light becomes a new challenge. As soon as the light jumps to green, the rear 200 tire whimpers for mercy, before it builds up plenty of grip after spinning a few meters and pushes the load forward vehemently. An experience with a high grin factor. But not without its downsides. It is true that the upside-down fork and suspension struts dampen and cushion almost everything that comes under the wheels in the form of waves and bumps. And the braking system with its three 292 millimeter discs is always ready to convert the acceleration energy into heat.

At one point, however, the fun gets a hole: When it should go around the corner. Then the whole load is stubborn, showing the disadvantages of wide rear tires, long wheelbase, 60 degrees flat steering head angle and a dry weight of 268 kilograms that should not be underestimated. The engine is not entirely innocent of this. It is very long due to the cylinder angle and therefore requires a lot of space in the frame. Apart from digital gas-open and gas-close commands, the Feuling behaves piously. The W3 runs smoother than a Harley V2, takes on the gas cleanly and also enables everyday life beyond the drag strip. At least one without a lot of curves.

The Feuling W3 could have become a serious competitor for the big V2s from Milwaukee. The subjunctive as well as the past tense make it clear that it was different. Jim Feuling died of cancer in 2002. And with it every approach to series production of the unique W3 bikes. The innovative inventor wanted to build up to 500 pieces a year. It stayed with a few copies that were in the showroom for $ 39,500 until 2002. Lots of money, but not too much for a handcrafted motorcycle.

Nostalgics or fans of unusual motorcycle creations can still strike today. The Feuling Parts company continued to take care of sales after the founder’s death. The engine is available for $ 75,000 to implant in a Harley chassis. Entire W3 two-wheelers can be ordered for $ 250,000. Guaranteed exclusivity.

A series product from BMW should of course not be that expensive. After the R 1200 C and R 850 C were no longer produced, there is a big gap in this segment at Bayern. And that despite the fact that more than 40,000 pieces of the slightly baroque-looking models left the production lines.

So now something new is to come. Patent drawings from BMW reveal that people here think differently from Feuling. In contrast to the American 90-degree engine, the cylinder angles are only 65 to 75 degrees. And there is another difference between the engine layouts: in order to allow all possible and impossible ignition intervals to flow into the considerations, two different basic crank pin configurations can be seen in the BMW patent drawings. Like Harley, Feuling did it with a single crank pin, with BMW it was either two or even three. In any case, the BMW W engine would be wider, the cylinders would be offset.

However, it is questionable whether a Bayern W3 will ever become a reality; other designs and configurations for future cruiser models are also being discussed in Munich. The W3 concept alone would have deserved it to experience Jim Feuling’s legacy as a real series product. The question of “what if?” Will probably be clarified in the near future.

Jim Feuling, born in 1945, was a motor fanatic. Immediately after leaving the army, he founded his R&D development company and quickly made a name for himself in the American automotive industry. This is how Harley-Davidson became aware of him. In the Big Twins, he solved the heat problem of the Twin Cam 88 engine. This work inspired him to create the W3 motorcycle, which he was able to present in 2000, but whose series production never started due to his death in 2002.

BMW W3 – the next attempt

The signs indicate a direction globally: growth. In Germany and many other countries, BMW is already way ahead in the registration statistics, above all the R 1200 GS. But more is always possible. In America in particular, BMW would like to gain new market shares. And here cruiser models are still among the most popular motorcycles. However, BMW does not currently offer a typical motorcycle in this segment. Not yet. Should BMW dare to start again, one thing is probably out of the question: copying other brands. The boxer would therefore be an option as a drive solution. But whether he will take on this role after the rather unfortunate R 1200 C and the R 850 C is questionable. More obvious, albeit of a very theoretical nature, would be a W3 engine. It basically takes on typical features of cruiser drives, but would be unique in the market, quasi a unique selling point. Speculation is fueled by the fact that patent drawings from BMW for this W3 configuration recently appeared. Even if you keep a low profile at BMW: The W3 cruiser would definitely be an answer worth discussing when asked about the right motorcycle for the largest two-wheeler segment in BMW’s most important export market.