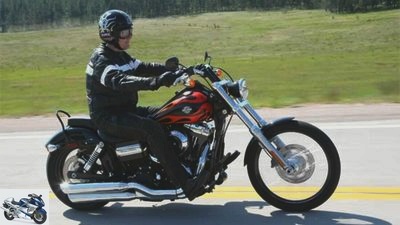 The very well-stocked Harley kit gives chopper fans a long fork that is reminiscent of the blissful do-it-yourself days. MOTORRAD glided around Sturgis / USA with the Dyna Wide Glide.

Retro is incredibly hip: Mini, Mustang, Merkel – all of them incredibly retro. Harley-Davidson’s policy has been one retro event for 106 years, and the company thrives on periodically quoting yourself. So now it’s the turn of the early 80s. A time when Milwaukee / Wisconsin had only just realized that the bad boy image was great for making money. In the official Harley worldview, choppers were for decades just despicable spawns of pathological self-builder fantasies, but with the FXWG Wide Glide in 1980 the attitude changed radically: fat rear wheel, a narrow 21-inch model in front with a wide and long fork, step bench, sissy bar Forward footrests and, to top it off, a drop tank with flame decoration – Harley’s first real series chopper was ready.

30 years later, the flames are allowed to lick again. Not somehow, but according to press information as “the most complex and extravagant paintwork that has ever been allowed to adorn a factory Harley”. That can also be said in a shorter way: It looks really great! 3000 Flames versions of the new Wide Glide will be available worldwide. The unlimited models wear “Vivid Black” or “Red Hot Sunglo”, also very nice.

Most of the trappings come from the Harley kit: proven Twin-Cam 96 engine, exhaust from the Fat Bob and the rear fender from the Street Bob. A feel-good atmosphere immediately emerges behind the wide fork, which is set flat at 54 degrees with a steering head angle. For people over 1.75 meters, the driver’s footrests are perfectly placed, the seat is suitable for wide ass, and the center of gravity that feels is a little below street level. It is not always a matter of course that you have unlimited confidence in a 310 kilo motorcycle when you first try it out, but everything just fits here. Also and especially the low drag bar handlebars. The typical Harley occasion ritual, of course, includes the bloodcurdling engagement of the starter. Just as naturally, every movement of the gear lever is accompanied by a hearty “clonk”. Technically, both could probably be easily developed away, but does anyone really want that? Even! 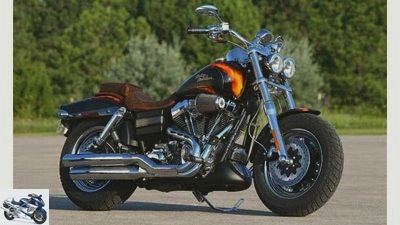 Up to about 30 km / h the flat iron is not a paragon of driving stability and directional stability – somehow the long and flat fork has to make itself felt. Everything about it is playfully easy and very stable. The Black Hills south of the Harley-Treffen Mecca Sturgis / South Dakota are not high alpine, but there are very sharp hairpin bends and very changeable alternating curves there. And it is precisely at these twists and turns of country road life that the Wide Glide scurries surprisingly lively. US-American Sunday-through-the-mountains junk dealers are not really interested in lean angle, but the FXDWG (the type abbreviation that is very important in the Harley world) also makes European test riders happy.

For chopper conditions, the notches come on quite late. The motor ensures a big grin on your face in every situation. In contrast to the Softail sister models, the engines built into the Dynas do not have balancer shafts, but are instead mounted in rubber. The silent blocks take away all vibration peaks from the twin. What comes through are soft, round vibrations, a very pleasant pulsation. But what unfortunately does not get through – in this case due to the two-in-one-in-two exhaust – is sound: The standard Wide Glide just sounds unworthy. This also applies to the US version driven for comparison. The accessories business of the responsible Harley dealer should thus be secured. The trusted dealer can also take the opportunity to devote himself to the front brake. In series production, it requires far too much hand strength and tends to bite toothless. Okay, the rear brake of a Harley has always been a popular and very reliable player, but the front double stoppers of the Fat Bob, for example, show how it can be done better. Loose brake, lousy sound – free, that can be corrected. The big picture of this fair calculated glide agent is absolutely successful, which should lead to the fact that the previous bestsellers Fat Bob and Street Bob will probably be relegated to the places in-house in the future. 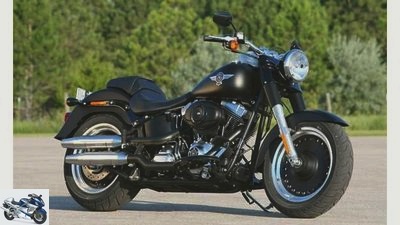 The Wide Glide (see driving report) is the only real Harley novelty for 2010. Everything else that the company presented in Sturgis / South Dakota at the beginning of August 2009 are additions and special designs to existing models. All model series were also given model maintenance measures, ranging from technically meaningful improvements (e.g. new oil tank for the Sportster) to the important cosmetic finishing touches (better UV protection of the leather of the tank panel of the Heritage Softail Classic). The XR 1200 X shown in MOTORRAD 17/2009 will not be launched on the US market and will be presented separately.

The Arnold Schwarzenegger memory bike (Terminator 2) comes even darker and deeper as an anniversary edition for its 20th birthday. The customer can choose between black: matt or glossy black. What is allowed to shine in chrome on the normal Fat Boy is matted on the Special. That looks very noble on the engine, but looks a bit like stove paint on the exhaust. The new, slightly flatter saddle is great for lounging around. Behind the massive handlebar with internal cable routing, the rider sits a little more in the Special than on the machine. The feet rest comfortably on crescent-shaped footboards. The gear change takes place in the tried and tested way quite heartily using the rocker switch. The Fat Bob belongs to the Softail family and is therefore equipped with the somewhat weaker Twin-Cam 96B engine. B stands for “balancer”, two balance shafts that cost performance. The engine is rigidly connected to the frame, which means that the vibrations that come through are more powerful than with the Dyna series. The Fat Boy Special prefers a quieter pace, because lean angle, braking power and dynamics (76 HP for 330 kilos combat weight) are rather limited. The fans won’t mind, because no Fat Boy has been cooler.

The name sounds similar, but the character is very different. Where the fat boy likes it cozy, the fat Robert is the liveliest representative among the Big Twins. Especially as a CVO model. CVO stands for “Custom Vehicle Operations”, the in-house refinement department that has been technically and visually piquing up Harleys in small series since 1999. There are four CVO models and a maximum of 900 machines for Europe in 2010, around 100 of which end up in Germany. The Fat Bob came into CVO hands for the second time, the ordinal number 2 in the type abbreviation reveals it. In addition to lots of chrome, an exclusive paintwork, a more elegant seat and a rev counter, the “stroker motor” equipped with fatter pistons is part of the CVO package. 1801 instead of 1584 cm³ provide six horsepower and eight Nm extra and much better pulling power. The chassis and brakes are already convincing with the normal Fat Bob and can easily cope with the extra CVO pressure. 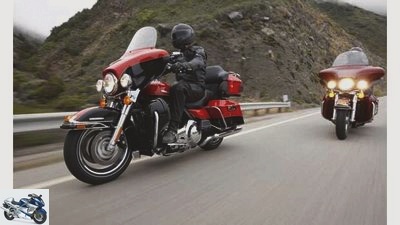 There is always more.

Even with the Electra Glide. Harley’s rolling living room got more engines and equipment. The 84 hp twin-cam 103 engine (1690 cm³) was previously reserved for government vehicles, but can now also be used in the new top model of the tourer series. The two horsepower and seven Nm extra make sense, because the thickness also drives more accessories for a walk. For example heated grips, a luggage rack for the top case and standard case bags. The previous top model also had ABS, audio system and cruise control to offer. As massive as the Electra Glide may appear on first contact, the perfectly balanced steamer can be moved easily, even by less experienced drivers.