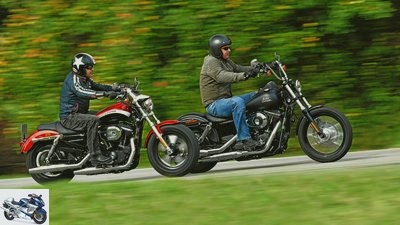 Harley-Davidson is celebrating another birthday. For the 110th anniversary of the US brand next year, the Americans are presenting not only colorful delicacies and limited special models, but also a revised Street Bob and, with the 1200 Custom CA / CB, two new versions of the Sportster family.

Happy birthday, Harley. For almost 110 years, the brand has been selling an attitude to life and, by the way, motorcycles as well. While the two Sportster models 1200 Nightster and XR 1200 X as well as the Electra Glide Classic have been deleted from the range without replacement, the Americans are bringing a 1200 Custom, which is available as a limited edition in two versions (XL 1200 CA and XL 1200 CB) is. The CA model comes in a NASCAR look with dynamic paintwork and cool cast wheels, the CB version combines chopper and bobber design elements. In contrast to the CA, the CB rolls on wire-spoke wheels and has a mini apehanger. The Americans offer the very successful Dyna Street Bob in Germany. MOTORRAD allowed the Street Bob and the Sportster 1200 Custom CA Limited Edition (what a name!) Drive exclusively.

When climbing the Street Bob, everything feels almost like normal. Nearly. Anyone who knows the previous models will find that the mini apehanger is apparently a bit higher. People with short arms notice the change when turning, because you have to reach further. In fact, the handlebar has not been changed, but from now on it is rubber-mounted via a modified mount. This attachment is around 30 millimeters higher than the previous model. This should dampen vibrations and make longer journeys more bearable. Little of this is noticeable in everyday use. The much acclaimed “Good Vibrations” are still there. On longer stretches of the motorway, however, you can feel how the rubber damping eliminates fine-frequency vibrations. That is quite pleasant. But the new mount makes it much easier to retrofit another handlebar. The other updates of the Street Bob concern less the driving dynamics, but are purely optical in nature. 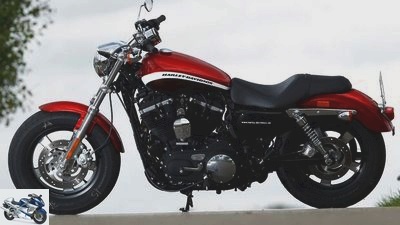 The Sportster Custom 1200 CA in the NASCAR look: flat, compact and “dynamically painted”.

The flanks of the top three cooling fin edges of each cylinder are now polished, the fork dip tubes are black, and the battery box is painted. You have to like that. Or not. The Street Bob has also lost its taillight wart. As is common with some other Harley models, the rear and brake lights are now integrated in the indicators. This solution creates a clean rear and literally calls for the license plate holder to be positioned to the side. This new look is a little cooler, and street bob driving is still extremely puristic. There is only you and the 1585 cubic V2, whose 76 HP at 5250 rpm is a guarantee for a constant good mood. The sound is quite decent thanks to a flap control, the braking power is sufficient despite the single disc at the front. For the Street Bob, the following still applies: manageable performance, single seat, tight spring travel, cool seating position – from 13 295 euros you are in the circle of lonely riders. 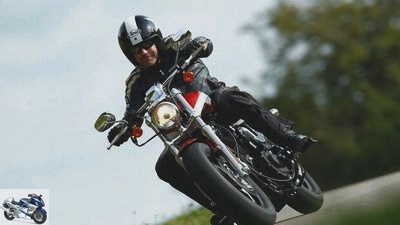 “Scratch the curve” – that’s where the expression comes from. The lean angle is severely limited.

For the 1200 Custom in the CA version, 11,330 euros have to be put on the table. The special model impresses with its mighty cast wheels, which are reminiscent of the wheels of American muscle cars from the 1970s, and in which a large area of ​​the five spokes was chrome-plated. This so-called NASCAR look (National Association for Stock Car Auto Racing), a homage to the glorious racing series, is underlined by special two-tone paintwork such as “Candy Orange / Beer Bottle” (test vehicle). The tire dimensions of 130/90 at the front and 150/80 at the rear, which look massive on a comparatively petite bike, go well with all of this. Nevertheless, the CA steers itself quite easily. In general, the 1200 Custom is a very easy to ride motorcycle. The low seating position of only 710 millimeters, in conjunction with the centrally placed footrests and the drag-bar handlebars that lie well in the hands, results in an ergonomic triangle that is particularly suitable for smaller pilots. They sit relaxed and are in control of the situation. You shouldn’t expect a lot of comfort in view of the poor suspension travel. The 54 millimeters at the back just absorb manhole covers and small holes. The fun stops quickly when riding in pillion mode. Charming as ever: the 1200 V2 lives, breathes, groans and exudes timeless flair. Its 67 hp at 5700 rpm are still sufficient for the small or large escape from everyday life. 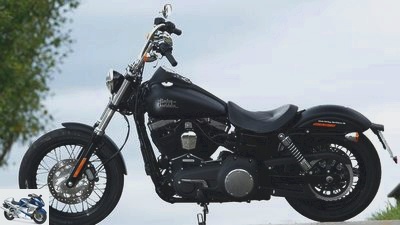 A little reference at the end: As a birthday present, the company gave itself a lavishly styled custom bike called the CVO Breakout (from 28,560 euros). The exquisite motorcycle will be produced a maximum of 1,800 times, only 300 of which will be distributed among the sales markets in the Middle East, Africa and Europe. Congratulations to whoever gets hold of one of them. On this way: Congratulations, Harley! 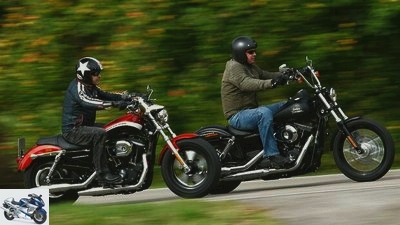 The Sportster 1200 Custom CB with apehanger and spoke wheels. 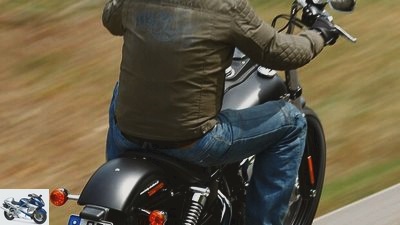