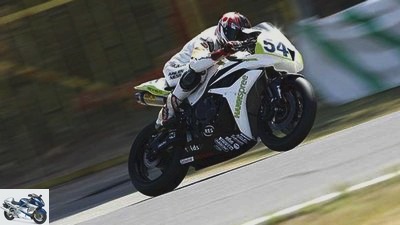 To be able to drive six current motorcycles from the Supersport World Championship in the current season and to be able to enjoy the highest level of technology is an extraordinary gift.

MOTORRAD was able to collect vivid impressions of the fastest 600 cc in the world.

The long, gently sloping straight line gives you the opportunity to take a short breath and think. It is okay to take a deep breath, not to think. Because the straight runs over a crest that hides the curve behind it. And if you think about it, you brake too early. Never mind? We do race motorbikes here, but ultimately not a race, and the track is still unknown to me. Caution is allowed, so I straighten up a bit, at the same time turning the throttle hand a little.

Woaschsch. With a hissing noise, Arne Tode arrows past, his lurching rear wheel waves to me briefly before he goes into the curve and almost completely under his motorcycle. He drives the Ten Kate Honda CBR 600 RR just as it should be for the top motorcycle of the Supersport World Championship. But the boss in this ring, the Vallelunga racetrack north of Rome, is what I drive. The day before, Australian racing driver Joshua Brooks set the fastest times here in tire tests on “my” Stiggy Honda. Even those who travel much slower can understand why. For example in the first two corners that planners of modern racetracks would no longer dare to do. An unbraked swerve to the left, then over a knoll? another one ?? after briefly releasing the gas into a steep wall-like right. On the road CBR 600 RR, the speedometer shows over 240, while the grinder on the right knee is melting.

The Stiggy Honda has no speedometer, but it takes its driver through this corner as if it were an understanding living being. »Trust ?? me, i do ?? that for you. ”She does it with well-measured handiness, balance and precision. The engine responds flawlessly to every throttle command, the power, which peaks at around 140 hp, unfolds almost bi- or double-linear, flat in the middle speed range and steeply upwards. Anyone who has found the gears and lines for the many long curves in Vallelunga will experience the four-cylinder in the middle of the curve as pious. However, as soon as the machine is upright enough that the tires bring the thrust to the ground, the steep, infernal part begins. As if the afterburner was ignited. A breathtaking experience. “That fits so well because we have a separate mapping for each cylinder and for each route,” explains a mechanic from the team of Swedish ex-racing driver Johan Stigefelt. “Our electronics technician is brilliant, tireless and crazy.” Arne also visibly takes a liking to the lively Stiggy Honda.

“Compared to her, the Ten Kate Honda has a lot more pressure in the middle, but I miss a little temper on the top. But this is probably the right recipe to win on the majority of the tracks. «When it comes to the chassis, he is no less torn between his personal preferences and the objective fact of the sovereign World Championship leadership, which Kenan Sofuoglu rode out with this motorcycle Has. “It would be too tight for me, there is no feedback. Because Kenan brakes extremely hard and accelerates brutally, that fits him well. The motorcycle remains wonderfully stable when you brake hard. «When the German super sport champion imitates the driving style of the World Championship leader, things work better; The fork and shock absorber finally react to the more violent forces with the movements that convey the necessary feeling for the tire and the track. “If you hit hard on the brakes in the corners so that the fork compresses properly, the almost stubborn straight-line stability can also be cracked, and the bike becomes manageable.” 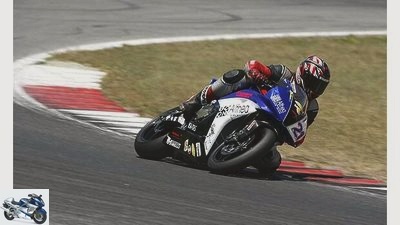 It’s strange how different motorcycles drive, all of which have the same technical basis. Katsuaki Fujiwara instilled a real greed for corners on his Althea Honda. Significantly longer and heavier than Fujiwara, I initially found the footrests to be too high. The sitting position felt like jumping into the curve while jumping. After a short period of getting used to it, this is exactly what makes the Italian team’s Honda particularly enjoyable. No other motorcycles present can take it easy with any of the other motorcycles that are present, or the agonizingly tight hairpin in the infield. The springs of the fork and the Ohlins shock absorber modified by Ohlins are, however, far too soft for a driver who weighs over 90 kilograms with a suit, helmet and all the trimmings. At high speed, this weight presses so hard on the hindquarters that the front wheel is relieved and the steering moves provocatively light. And before the bends, brakes with less need are able to wave the rear wheel because of the fork that plunges quickly. The normal shift pattern preferred by Fujiwara also seems unusual ?? first gear down? in combination with an automatic switch. The engine is less explosive than the Stiggy Honda, but still powerful in the middle and with a sensitive response.

It is remarkable which positive side effects the high-end tuning shows in all four-cylinder engines in terms of smoothness. The series parts that go into the engines are apparently so well selected, balanced, balanced and adjusted that they purr like kittens and hardly vibrate. The need for revision of the engines operated with the thinnest special oil is immense; After 400 kilometers at the latest, new plain bearing shells for the crankshaft and connecting rod bearings are due, as well as a new timing chain, preferably with a tensioner. Possibly also the valves. In terms of the pure spare part costs, it is quite manageable, a horror item in terms of working hours. When it comes to maximum speeds, the tuners do not proceed according to the standard formula “Series plus everything is better”. Rather, they stick to the range between 15,000 and 16,000 rpm, but fill it up with a lot more power. 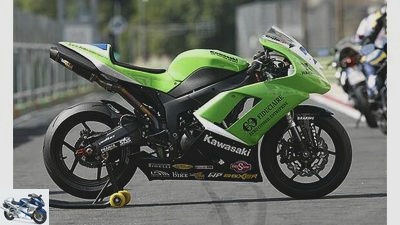 Of the six machines driven in Vallelunga, the French Gil-Motor-Kawasaki from Pere Riba achieved the lowest peak speeds. The next gear is due at just over 15,000 rpm. On the other hand, it has the most pressure in the middle, which is efficiently applied to the road thanks to a perfectly stepped transmission. What tuning work on the computer is to the Stiggy Motorsport team, the mechanics at Gil-Moto are playing with gear ratios. »With the cassette gear on the new ZX-6R, we can dismantle the shafts with little effort and have two or three different ratios for each gear pair. So we always put the right things together. «They also show a lot of love for detail in other areas. Whether with the adjustment of the brake lever on the left end of the handlebar, the way in which the instrument cluster was fitted into the cockpit, or the ease of movement of the levers. The Kawa surpasses the already excellent manufacturing standard of the World Cup bikes by the icing on the cake. It’s just a shame that once again the driver’s weight does not match the suspension setup. The ZX-6R pumps with the hindquarters. Not treacherous, nonetheless noticeable and always when the engine pulls. This movement only subsides under the action of the cautiously snappy, but easily controllable brake. 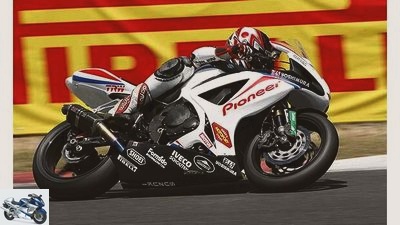 Compared to the petite Honda and the Yamaha got the Kawasaki longer and bigger. A peculiarity that it shares with the Suzuki of the Dutchman Barry Venemann. But that was it with the similarities. »The Suzuki engine was tuned to the limit in order to be able to keep up, its performance characteristics are too sharp. At top speed she is always at the forefront, but it is very difficult to drive because of a trailer in the middle speed range, “says Arne Tode, describing his impressions. To compensate for this, the WM-GSX-R offers a wonderfully adjustable brake, which, in combination with unshakable braking stability, brings advantages in the position battle before the corners. “That comes from the seating position that has been moved far back,” says Arne, adding: “A very special motorcycle that takes a lot of time.” 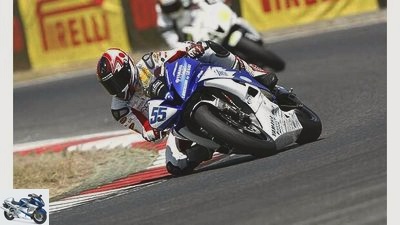 Who is he telling this to? For a veteran tester of street motorcycles, every racing super athlete is even super special. And finally this: »Attenzione, motore libero«, says the mechanic of the Lorenzini team when he hands me Massimo Roccoli’s Yamaha R6. He doesn’t mean that the engine spins freely, after all, they all do that. Rather, it warns of the radical adjustment of the anti-hopping clutch, which allows practically no engine braking torque on the rear wheel. In addition, Roccoli has deliberately chosen deaf pads for the rear brake, so releasing the accelerator and stepping on the foot brake lever result in less deceleration than with a two-stroke engine with closed sliders. Terrible moments in the first corners: Is the gear not in the right place? Does he jump in by himself and throw me down? Does Roccoli want to force himself to cornering speeds as high as possible? This is supported by the neutral steering behavior, which Arne also expressly praises. The engine with its sharp characteristics and its powerful acceleration between 12,000 and 16,000 rpm speaks against it. Finally we agree on the possible explanation “special” and enjoy the well-groomed, brutal performance of the Yamaha lighter when accelerating.