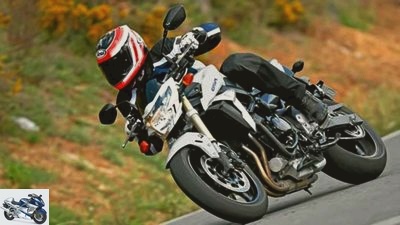 This is a tradition at Suzuki. The (sales) stars in the model range come across as folk rather than radical. The hope bearer GSR 750 breaks with the traditional values?

Basically the matter is obvious. So compelling that one can ask why Hamamatsu only came up with it now. After all, there were hardly any arguments in the past for a speed-addicting 600 on the way to work or on a vacation trip. Especially not if, like Suzuki, you had a patent 750cc on the shelf and you usually gambled away the weight advantage of the small cubic capacity due to the cost-reducing common parts strategy.

The Bandit sisters, where the chubby 650 weighs almost as much as the fat 1250, are a good example. They are not a good one. The new GSR 750 does not challenge that.
I.Fortunately, in her case, things are very different. Not downsizing, but upgrade is the order of the day, not least due to the changed competitive situation. Regardless of whether it is a Kawasaki Z 750, Yamaha FZ8, BMW F 800 R or Triumph Street Triple: Nobody in this class is content with 600 cubic centimeters (except Honda for the Hornet). She has gotten out of hand.

Rather seldom: the GSR has to be forced onto the rear wheel.

On the other hand, the sight of the GSR certainly makes many a pulse beat faster. The “bad boy image” was mentioned during the technical presentation. Suzuki is rightly proud of the European appeal and the successful mix of sparse streetfighter minimalism on the one hand and balanced proportions on the other. A rear frame, not too long and not too short, a pleasing lamp mask with the evil eye that is indispensable these days, a tank that is steep and craggy in front of the driver – with this appearance the GSR is absolutely capable of majority. It should attract many across the board, from the Bandit to the GSX-R clientele, although the committed sports driver in particular has to overlook some of the details that are customary in this class. The simple box swing arm made of steel does not meet the demands of a technology gourmet, the simple double-piston floating calipers on the front wheel (on the subject of ABS, see interview on the right) are class standard, but have worked better elsewhere, especially when cold. Despite its aluminum appearance, the bridge frame and the wide, chrome-plated steering tube are only made of steel. In short: The omnipresent cost pressure cannot be overlooked, especially in the high-volume middle class, even with Suzuki.

On the other hand, however, the vast experience of the Japanese in functional terms is omnipresent. The GSR convinces with a balance that convinces even spoiled country road cracks straight away. The ergonomic conditions are a good example. The handlebars are not excessively wide, the footrests are not excessively high – the bottom line is that the seat position is active, front-wheel-oriented, not uncomfortable and even suitable for long journeys. In addition, the 41 mm upside-down fork from Kayaba and the shock absorber provide clear information about the state of the road without being unyieldingly hard or rocking underdamped. The shock absorber distributed across the joints, although every now and then a hearty blow in the back, should in return, however, also put away the two-person operation without complaint. The GSR rolls neutrally into every corner on the adhesive Bridgestone BT 016 sports tire, perfectly maintains the given radius and does not allow itself to be diverted from the given line, even with a determined effort. It is not a paragon of handiness, but neither is it super nervous. And therefore the bottom line is a very typical representative of the Japanese street fighter culture, which usually combines an aggressive appearance with relaxed driving characteristics. The pricing for Suzuki’s new middle-class sweeper also falls within the target range that is customary in the class. 8290 euros (without ABS) are due for the new GSR 750.

That is deceptive: the bridge frame is made of steel, not aluminum.

Suzuki sales manager Paul M. Rowney on the late delivery of the ABS version of the new GSR 750.

ABS is not yet available for the presentation of the new GSR 750 and for the first tests. Why not?
Suzuki developed this motorcycle with a focus on Europe and listened to the voices from the markets. Most customers in Europe do not yet attribute the same value to ABS as in Germany; in some markets it is still predominantly rejected. However, only limited resources are available during the development process. Therefore, the motorcycle without ABS was developed first. For all future models that will be equipped with ABS, however, the ABS version will be the “base model”.

When will ABS motorcycles be available in Germany??
In the second half of the year. Unfortunately, due to the recent events in Japan, we expect a slight delay, so that it is unlikely to be expected before mid-August.

How high do you estimate the proportion of ABS versions of the GSR this year, how will it develop in principle?
This year, due to the late availability of the ABS models, with around 40 percent. We normally expect the models with ABS to represent over 90 percent of the units sold in Germany. In Europe, the proportion of ABS models will increase to around 60 percent in the next two years.


ABS put to the test