The Ducati 848 is the mid-size sports car of the Italian brand, evolution of the 749, halfway between the 696 cm3 of a Monster and the 1198 cm3 of its big sister hypersport from which it inherits many elements: frame, rims , suspensions. The Desmo L-shaped byclinder is once again in the spotlight, available in white and red. 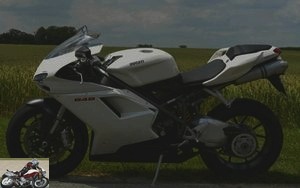 Elegant, the 848 is above all a big thing. Its line makes you dream, supported by a magnificent aluminum single-sided swingarm, the trellis frame and a high double exit. 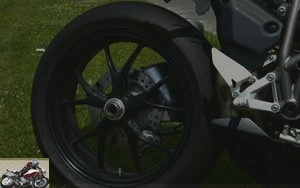 The pearl white livery (white pearl) is the most beautiful effect. Ducati has succeeded in its color, far from a dazzling white for a white with almost iridescent reflections. The 848 is the same size as the 1098, except for the "848" written in on the fairing sides. We find the pencil stroke that characterizes the sports type 1098 and 1198: double front optical sharp, flat tank, two-seater saddle and the L-twin with Desmodromic distribution of 849.4 cm3. As we get closer we notice the ride: Dragon Supercorsa Pro, nothing less! Granted, this is not the latest generation of Diablo, but they are definitely sport tires.. 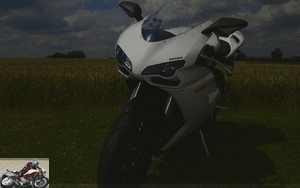 The feet are just touching the ground for the 1.70m rider, but the machine is light … with only 168 kilos. If the torso instantly leans forward, the position is almost easy and less pressure on the wrists than most sportswomen. Her waist is very thin and the knees hug her naturally.

The counter looks like a Christmas tree during the reset: blue, red, orange, it flashes! Note that the 848 is pre-equipped with DDA, with data acquisition. 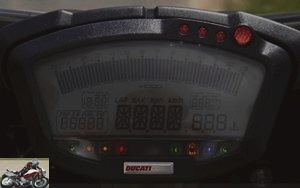 The well placed counter at the bottom of the bubble and fully digital is relatively readable with a tachometer bar graph across the width. The display offers speed, trip, trip reserve, totalizer, oil temperature. On the left handlebars, you can start the stopwatch. Overcoming the dashboard, 3 medium diodes and a larger diode signal the engine speed and the arrival of the switch. However, there is no fuel gauge.

The mirrors mounted on the fairing and including the turn signals are adjusted by lightly pressing the mirror. We note their very aesthetic design with curves and straight lines: a real visual success. 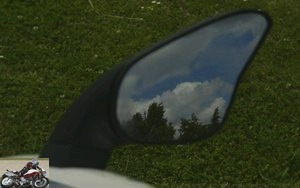 A low and hoarse sound escapes from the double exhaust line passing under the saddle. We feel the twin from the first turns of the wheel, which knocks under 2,000 rpm but takes ease from 2,500 to start breathing at 3,000 rpm. 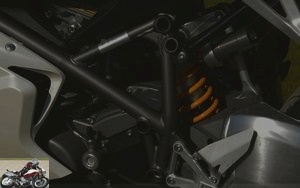 The box is soft and precise.

The 848 is light and fits easily anywhere. The first is drawn far but we quickly pass the second on which we stay most of the time. In third on the lowest gear, we already exceed the authorized speed. The slow speed of the 15km / h type between two idling cars is probably the speed at which the 848 likes the least: a speed really not ideal for the twin, even in first. We feel that the sportswoman needs to take her turns. The position is much less tiring than on most sports cars, even in traffic jams. The cuffs even survive well. On the other hand, the engine heats up very quickly, with a temperature quickly exceeding 100 ° C. Suddenly, we take advantage of the stops to take the buttocks out of the saddle and cool down.

In fact, only the mirrors are really useless, they offer such poor visibility. You have to contort yourself to see something other than your elbows. 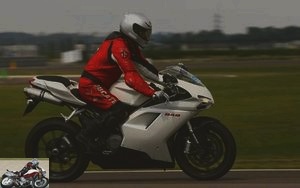 The pace can always pick up and the 848 remains a rail on all occasions. Protection turns out to be good well beyond the speeds allowing you to lose your license.

While the 848 adapts very well to the motorway, it adapts just as easily to nationals. You just need to drop at least 1 gear or even 2 gears to start having fun. Because if it accepts to drive under 4,000 rpm, it is above all from 5,000 rpm that the twin makes lyrical flights hear and shoots up to the breaker, with an exceptional extension for a twin. Accelerations are straightforward and regular.

It is on smaller roads that the 848 demonstrates its precision. The series of turns are done quickly, cleanly and in a neutral fashion, without forcing. The bike just goes where the eye goes. Of course, do not hesitate to sway to take her, but once on her trajectory, she never leaves her, even allowing adjustments to the angle without scaring her pilot.

The bat just starts to hurt when the coating breaks down. Beyond the firmness, the suspensions are dry, even very dry. This always ensures ideal and perfect behavior, but makes the rider jump in the saddle when the road surface is a little deteriorated, as is regularly the case on small networks..

It is difficult to test a sports car without going on the circuit. But this is where she shows her full potential, quickly building confidence in her rider. In fact, Supercorsa Pro tires heat up quickly and literally stick to the track without even completing the first lap. After that, you can open wide without the slightest start to slide, even on the corner where the 848 appears stuck to the ground. Quick downshifts result in no rear wobble, as if it was equipped with anti-dribble! But sure, there is no anti-dribble. It is just well designed. The revs are almost linear, from 2,500 rpm and up to 9,000 rpm, or even at the breaker at 11,500 rpm where you don’t have to stay to have it all. The flexibility at low revs is such that you can wind under revs in a pin without the 848 balking. But it is in the series of turns that the 848 reveals all its know-how with a liveliness and precision that make it an absolute weapon on the track. And if the dry suspensions were a fault on small departmental roads, this fault disappears completely on the circuit where the 848 welcomes its driver very well.. 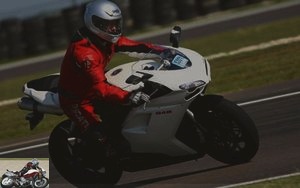 Braking is largely up to the bike. You would expect bite and power…. we have a mixture of power and softness. The four-piston Brembo radial calipers provide excellent braking, powerful but without violence and with a good feeling. The rear is a good retarder, very present in town, and useful on the track. The front is imperial and really easy to use in everyday life, but also on the track. It is thus possible to brake very hard while remaining perfectly in line.. 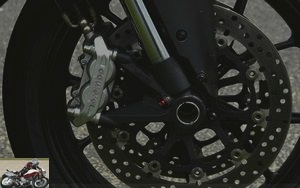 She is a sportswoman, the use of which does not include the notion of the slightest practicality. There is still room under the saddle for a disc pad, or even rain pants. The rear folding seat allows you to place a small bag, the straps of which will be able to catch the appropriate locations at the footrests. The large pots under the saddle prevent the use of side bags, without the risk of them melting. 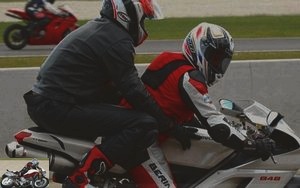 Um… .. No, she’s not made for that. The jump seat is really small, high placed and flush with the double exhaust. There is also no handle. The passenger seat is present here for aesthetics and line more than for the purpose of practicality. On the other hand, if the place had been more generous, the character of the 848 would allow to take a passenger without making him sick.. 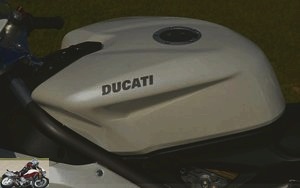 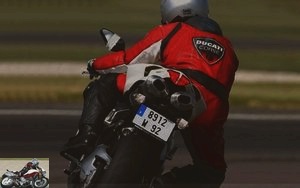 The Ducati 848 is an almost versatile sports car that will appeal to bikers who want a sports car but have not yet taken the plunge as they often suffer from an extreme stance or too violent character. The 848 is pleasant from day to day, not only for its aesthetics but also for its rarity; everyone turns around in their path. Much less exclusive than a 1098, more torquey and easy on a daily basis than a 600, the 848 scores the best of both worlds. Only its price at 14,065 the place more expensive than its competitors 750 cm3 which it approaches in terms of behavior more than the 1000 cm3.