After 15 years of development, the Monster underwent a real makeover in 2008: new line, weight reduced by 5 kilos for only 161 kilos, power increased by 7 horses for 80 horses at 9,000 rpm, Siemens injection, inputs air in the tank, assisted clutch (APTC), dual radial-mounted 4-piston calipers, 43 mm inverted fork, ultra-flat optics…. only the trellis frame remains but with enlarged tubes ! The technology is here: data acquisition, 100% digital counter, brembo braking…. It used to require a certain mastery of the couple, in particular the downshift. It incorporates an anti-dribbling system which should facilitate handling. Often presented as affordable for beginners, is the 2008 version still as suitable? ? 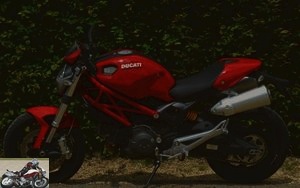 The Monster has a unique line, which is all the more noticeable in its Ducati-branded red line. We immediately notice the air inlets on the tank which allow more than an improvement in the turning radius to gain 3 horsepower.

Coming with a saddle shell, the Monster flaunts its selfish characteristics. The cover is unscrewed with an allen key, not included in the tool kit provided ! 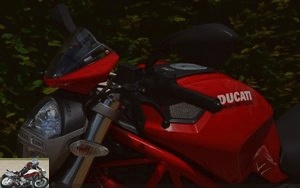 The feet touched flat on the ground for the pilot of 1.70 m. With a saddle of just 770mm, this is without a doubt the lowest motorcycle in the 600-700cc roadster class..

Very wide flat handlebars positioned low, the torso falls forward, almost reminiscent of a typical sporty position, but without support on the wrists. The bust is almost one with the bike and the overall position is closer to the ground than usual.

Polygonal mirrors, very aesthetic, are adjusted by pressing their mirror. But their position, especially with regard to the pilot’s position, makes them almost useless on a daily basis, like the speedometer. 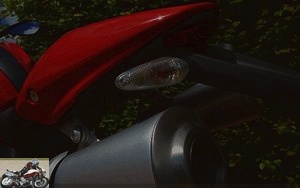 Key turned on the tank, the raised double rear pot distills a serious, almost hoarse sound, enchanting to the ears. Eyes are turned to the beautiful instantly, both for her line and for her tones.

The clutch surprises with its smoothness…. unlike previous models and thanks to the new APTC system. As a result, the Monster 696 no longer looks like a left wrist bodybuilding tool like in previous years. However, there is no clutch clearance adjustment. That said, the clutch engages on the first few inches.

We can feel the rigor of the twin on the first gears, asking initially to dose the starts, until it becomes instinctive. 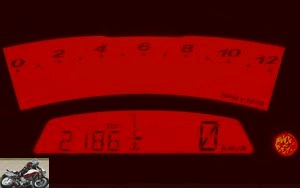 The typical stance is quickly forgotten and is just as easy as a classic roadster stance. It is possible to easily and quickly squeeze between the queues without any problem. Low speed maneuvers are easy. Only the wide handlebars on which are positioned particularly wide mirrors, can graze more than usual in width.

It is possible to oscillate between 2nd and 3rd easily in town, the twin cylinder accepting to wind up at 2,200 rpm in 6th gear, and tow from 4,000 rpm without knocking. Even the first one turns out to be pleasant.

Only the heat, significant, released by the engine, under the saddle warms the pilot in the spring. 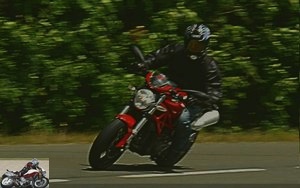 The Monster engages almost violently on the freeway and pulls forcefully to shameful speeds. The almost lying position on the tank protects very well from the wind, protection further reinforced by the mini-windshield.

Stable in a straight line, unperturbed in long curves, the Monster adapts very well to this type of route. 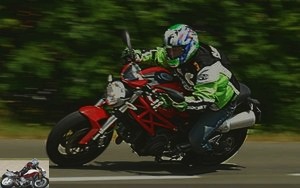 Gifted on the motorway, the Monster reveals all its personality on departmental roads. The speeds go up quickly or more precisely, we immediately reach the switch on the first gears, asking to engage the additional gear quickly. It becomes a real game, even if we feel that the engine could have climbed much higher, and that the forced gear shift does not give it time to express itself as it could..

But what marks the most on the departmental side is the exemplary behavior of the cycle part. The Monster reveals its strength and becomes a real rail, like no other roadster. Its rigidity allows it to be manhandled on any road, without the trajectory suffering. The gaze settles and the motorbike goes there effortlessly.

Angle changes are easily made giving the impression that the bike is reacting as a whole … which gives the rider even more confidence and encourages a more muscular ride that the Monster readily accepts.. 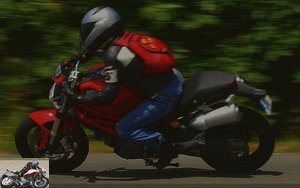 The Monster offers powerful braking up front with a very good feel. The cycle part being there, the bike does not dive, even in the event of very heavy braking. On the other hand, at slow speed in town, braking can seem brutal at first and requires a little dosage, especially in the rain.. 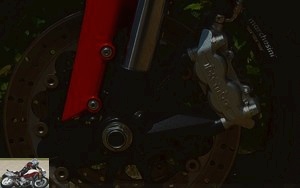 Ascent in BT56, these are a priori more touring than sport tires that must be warmed up before attacking. In fact, the cycle part associated with the 80 horses means that they heat up easily and without waiting time. At least it is possible to drive hard without expecting a large tire budget..

The Monster is definitely a selfish motorcycle and there is little room for the passenger except for a very short ride. For the pilot, there is nothing wrong with him. The shock absorbers and saddle assembly works well, giving firm comfort but allowing you to string together the kilometers without any problem.. 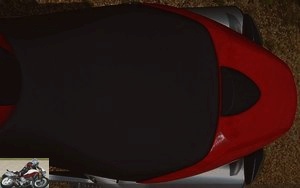 This is probably the part that annoys. There is no room under the saddle.

The stand unfolds and folds up well offering very good stability to the bike, even on sloping ground.

Easy to handle, with an exemplary cycle part, the Monster offers a motorcycle of character but safe, which builds confidence very quickly. Ideal for a young driver, it offers excellent sensations for the more experienced rider who will appreciate its precision on the road. More seasoned pilots will turn more to the model with 200 cm3 more.

Datasheet
Your reactions on the motorcycle forum |