There are times in a biker life
where the emotional strikes, in the heart ! 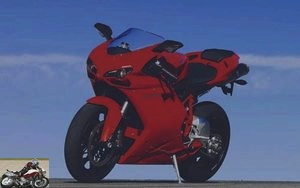 I remember when the 916 was released
: what a slap! A stroke of genius signed Massimo Tamburini.
Not easy, however, to succeed oneself but,
evolution requires, despite many alterations it was necessary
well think one day or another to replace this sublime
motorbike. Then arrived the 999 which was received quite coldly
by brand aficionados. The 999 has made its way
thanks to its intrinsic qualities without any
times unleash passion, despite several
SuperBike titles. Ducati had to rectify the situation.

The first photos of the 1098 were like a
bomb. The Italian firm had just struck a blow by revealing
his last hypersport. 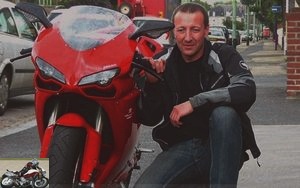 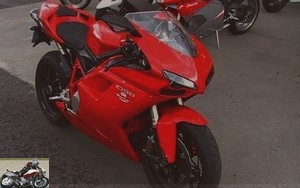 After Tamburini (916, MV Agusta F4 …) and Terblanche (999), it is
to Gianandrea Fabbro that the Bolognese firm has entrusted with
1098: lines stretched to the extreme, mix
aggressiveness and sensuality at the same time, a
sylph finesse. Result: emotion is back
and the order book already full, well beyond
forecasts from the slightly outdated Italian manufacturer
by events. 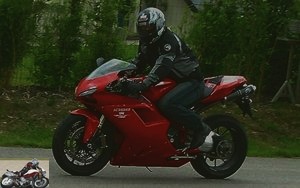 She is there, in front of me, and I’m like a kid who discovers
marveled at her first flirtation. I stay a few moments
without moving, as if to fix this moment in my strong interior.
My biker heart, yet a little jaded after these
long years spent in the saddle trying everything
who comes out, wakes up by starting to beat so
unusual: even more beautiful than in the photo, the Ducati gives off
a crazy charm from the first glance on her !

Double optics, minimalist seat backrest, single-sided swingarm
alu … it is more like the Desmocedici of MotoGP than a Superbike.
With 173 kilos (dry, 197 kilos fully loaded), she also
lost 13 kilos, and confirms on the scale this finesse and compactness
overall … one would swear almost a 600. Italian designers have
even pushed the vice to equip it
from the dashboard of the Stoner motorcycle ! 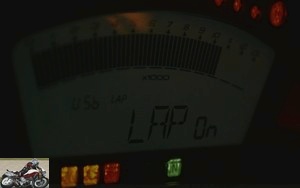 Only the two enormous Termigoni silencers (fitted for
occasion) let us suppose that we are well
in the presence of a Superbike. 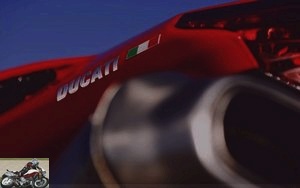 On the front release of the tank, a slight
pushing the push-button with the right thumb
and the beauty snorts in a jerky growl at the
rhythm of the two big bowls that have just woken up.
The sound is deep and cavernous, like an invitation to
curl up in it …, which I do very quickly. Charm
is also extended by the strong and sweet voice of the two Termigoni.

The half-handlebars are judiciously arranged. A little further apart
and closer to the body in relation to the 999, they are not
not arranged too low, leaving a tilt of the body rather
natural for my 80 meter. The tank is of a
incredible finesse for the displacement and allows you to tighten
the motorcycle that seems very small. The saddle embryo, on the other hand,
seems quite firm. We talk about a sportswoman! The legs find
naturally their place in the notches of the fairing
and the saddle, handlebars and footrest triangulation seems judicious. We
is camped on the front axle, the nose on the controlled on-board computer
by a selector on the left thumb on the stalk allowing the display
speed, lap count in numbers, partials, stopwatch…
The 1098 doesn’t cheat and gets you in the mood right away
: isn’t it Toseland that I see over there ? 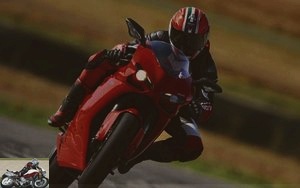 First (the clutch seems to have lost that hardness
characteristic of beautiful bolognese), a little gas and…
Let’s go ! We must already get out of town, a
exercise which it does not pull too badly thanks to its lightness,
the neutrality of its front axle and the flexibility of the twin which accepts
to resume from 3,000 rpm despite a first
endless. Very quickly, two things are noticed: a radius of
gigantic steering (in addition to getting your fingers caught between the half-handlebars
and the fairing) and a furious rise in heat from
exhausts under the saddle. The beautiful mirrors with
integrated indicators, failing to fill their
function, have the advantage of not being
very wide and even if they are right next to
height of those of the cars, we still manage to sneak
quite easily. But we feel that the 1098, even if it is
leaves driver without flinching in these conditions, seems to behave like
a wild animal in a cage, claiming a little space…

Phew! The traffic gets smoother as I
away from the upper Normandy capital in the direction of Vexin.
It was about time because I have legs that are starting to
cook seriously !

I wrap gently, the time to understand my sweetheart of the moment,
which allows me to note that the mill is much more lively than
its predecessor by showing itself very alert from
that we touch the 4000 turns. In fact, at this coiled pace,
we naturally pass the reports to 8000. It is between these
two speeds that the machine plays with the fat of the couple. Any
brutality, simply a very present behavior well
in phase with a cycle part that can be learned very quickly in
these conditions by accompanying us without flinching. The rumble of the twin
through its Termigoni (approved …, yeah!) is
fabulous. The motorcycle seems to speak with each turn of the handle
and growls with pleasure.

The motorcycle is very light and easy to
place on the traj ‘. Only downside, in the turns very
slow, it retains the common feature of Bolognese sportswomen and demands
a certain accompaniment to turn correctly. On the other hand, it is necessary
watch out for the speeds reached: reading the speed on the magnificent
dashboard is not instinctive, the rev counter is readable,
not the tachometer !

At this rate, the bike is very instinctive in behavior.
The front axle seems lively and precise, the suspensions dampen
correctly with just the right amount of firmness, just a
fork which seems to me a little flexible in compression (but as it is
adjustable, that’s just a detail). I take quickly
confidence by opening a little more. A blind right looms at
the horizon, I aim for the rope by grabbing the right lever as on
any other motorbike and … Wouhaaaaa !!! I find myself
stopped a good twenty meters before diving to
the rope … the new Brembo brake calipers are mind-boggling. 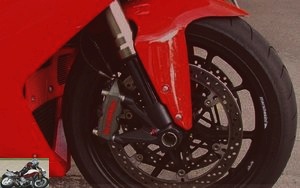 Stopping power is just mind boggling, never seen it before
before ! Those who are used to braking with two fingers can
remove one, incredible !!! I tell myself that luckily the road
was neither gravel nor dented and still
less humid. Paradoxically, the rear brake is the opposite,
shining through … a barely sustained almost non-existence
a very limited engine brake for the displacement.
A Gex 1000 seems to me to have more with its four
cylinders. This unexpected braking gave me a glimpse of a
another fault of the machine: a hydraulic fork
a little light which generates too much mass transfer.
The only way to find out more, frankly turn the handle
right now that she and I have made a tire acquaintance,
which will allow me to understand that the miss was hiding her game well
until now… 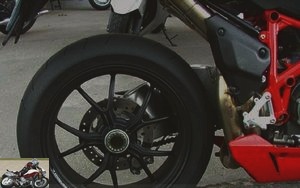 Until now, I have been dealing with an easy motorcycle that
let take almost like a SportGt, except in the bends
very slow. There she shows me another face.

Let’s go over the mechanics very quickly: past the
8000, it continues to rise to the limit located
around 10700 with a good draw, but it is
from there that we plague against this damn law of "
without horses ”! We feel that she wants to leave but that something
thing is holding her back. In addition this part cycle designed to collect
much more sets the tone for this ineptitude. Of course, the 1098 is
far from crawling, but also far from the capabilities
for which it was designed! Fortunately, the
clamping intervenes by a system of wedges which blocks the admission
halfway through the handle, which leaves its natural length
and allows a steady rise in speed,
but it is preferable in these conditions to roll up
to go quickly with. 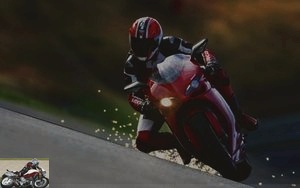 As soon as we increase the pace, there is no question of being satisfied
to handle it "with bracelets", the beast stretches out and finds itself
all the rigidity of a Ducati. There you have to play
footrests and move to accompany it, otherwise
it shows itself under tack as possible in addition to a front axle
becoming very fickle. As soon as we take care of it, she finds
instantly all its superb and plunges with a forward glance
even thinking about it. This bike bends to its rider if
the latter to the job to take him as she does
ask him. 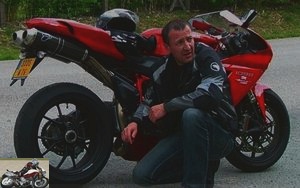 Ducati has designed its 1098 in the sense of absolute performance,
without any compromise: from easy to drive, it becomes particularly
demanding if you do not have the baggage to do so. And again, it is
of the restricted version which lost 55 horsepower in the operation.
This is the case with any modern sports car, but it is particularly
blatant with the latter !

It is above all this demonic braking that requires a certain
be careful not to get trapped: it remains dosable to the millimeter
close but its power calls for caution. At this rate,
I found the fork a little below the qualities
of the motorbike, unfortunately the lack of time did not allow me
touch the settings and check if it is
of a simple adjustment – what think – because the part
cycle seems out of the question.

Needless to say, there is no protection and the aspects
practices relegated to the background. It is indeed a
exclusive sports car and in this area Ducati has struck a
strong! This magnificent motorbike charges a high price for what it
gives as part of the dreams, both by the financial aspect – 21.195 €
all the same – only of his behavior, but you have to know what
we want. To touch this certain form of absolute with your finger,
we must also deserve it: this bike is at the height of what it
proposes, if we accept the rules of the game, then we are not far
happiness. 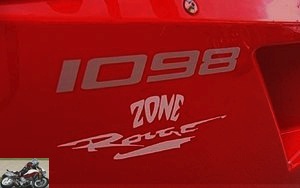 Special thanks to Hubert, the boss of Zone Rouge,
for the loan of the 1098. Lined with a real
passionate, he did not hesitate to confide
her baby for testing. We must see
the way he in question of "his" Ducati … The
all with a sincerity that proves that a salesperson
of motorcycles coupled with a business leader is capable of
to live with his guts and his heart. This inspires respect
reassuring on the fact that there are still in the midst of
people for whom the passion for motorcycles is not just a simple
commercial argument.