Rediscovering a myth is always a pleasure tinged with apprehension: can a new monster be more successful than its ancestors, especially when you know that the first Monster dates from 1993? Very quickly, the answer will be obvious to you: YES ! Revamped both in design and technology by Giulio Malagotti, the new Monster 1100 remains more than ever a must-have model in the motorcycle world. The S version of the Monster 1100 is distinguished by its Marchesini rims, titanium nitride coating, a fork and progressive Ohlins shock absorbers adjustable in preload and rebound as well as carbon elements.. 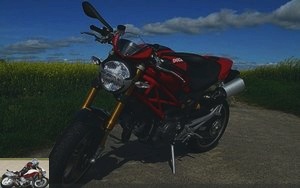 Dynamic is the word that dictates the overall aesthetic of this model. Mid-trellis frame, tank, rear shell, headlight, mirrors, double exhaust, massive single-sided swingarm … welcome to modernity. But the Monster also exudes quality, because the finishes are simply excellent; commodos, welds, adjustment, paintings, details and bolts … everything is neat. 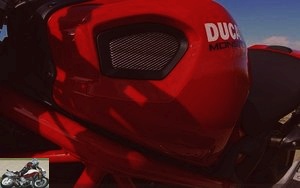 The tank keeps its shape the slightly bounced but is enriched with a few flats and mesh side air intakes of the most beautiful effect.

The frame also evolves with the adoption of a half-trellis and a cast aluminum rear loop.

Here is a monster which seems very small for a pilot of more than 1m80. The machine’s very light weight – 168 kg dry, or 1 kg less than the Monster 1100 – is disconcerting. We would swear a 500 and not an 1100 cc … hardly impressive at first. So where is this terror that its name evokes? ?

And then "what is this position?" No, we’re not sitting on the tank though. Although tilted slightly forward on the wide, straight handlebars and seeming to dominate the fork, we still sit comfortably in the saddle. But the head seems to hang over the front.

Its headlight flying over the mudguard, the counters of the Monster 1100 are therefore found … far from the eyes. This is unfortunate because, not being already at the base easily readable, they become more of a graphic design of a lighthouse than a source of information … No matter, this machine is piloted by instinct … no? 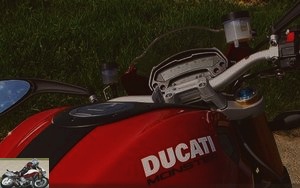 Only the tachometer bar graph, upper dial, remains intelligible, as long as the sun does not hit it. This is, perhaps, the only downside of this model. Equipment with needles, but above all, closer to the eyes, would have been a real advantage. The lower dial is therefore supposed to offer: speed, partial trip and totalizer, engine and exterior temperatures, clock, lap time, voltmeter, but no fuel gauge. Here you will know, if you can’t read it.

The mirrors are large, efficient and easy to adjust. And they don’t shake !

The foot controls are set back slightly, making everything comfortable. The Monster accepts you on his back, well positioned, ready to do battle…

The Desmodue block (two-valve desmo) 1100 comes to life with a typical Italian rumble. The regime rises for a moment, then weakens. The twin reacts to the slightest request, without inertia. It promises… 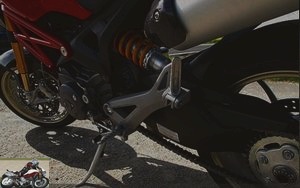 The first report passes easily; others will do the same, with no particular effort on the clutch. Goodbye the hard clutches of yesteryear.

The Monster 1100S knows how to receive. But it also knows how to send: each gear change pulls strongly, although almost smoothly. Another novelty, thank you for the Siemens injection !

Although remaining a bit rough, urban developments are not a problem. The Italian allows you to squeeze through thanks to its lightness, and despite its reduced turning radius (reduced but significantly better than its predecessors). Its engine liveliness is a marvel. Be careful with excessive temper, the limit to 50 km / h imposes a lot of restraint. The injection is pleasant and even if the Monster remains a twin – hardly accepting to evolve at less than 2500 rpm – the whole turns out to be a real city car. 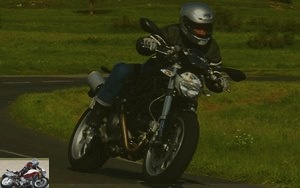 The Bolognese is certainly designed for these secondary axes where the 4th gear is king. From 70 km / h to more than double, it allows everything: winding at 3000 revolutions, sending well from 4000 rev / min or working around 6500, at maximum torque. The twin also allows you to access the heights of the tachometer with aggressiveness and efficiency.

Swirling from one curve to the next, the Monster 1100S reminds you that its surname is not usurped. It tows again and again. A real treat that the exhaust underlines with a very present sound and raucous backlash when downshifting. Hobbyists won’t even need to look for other sound appendages.

Very rigid, the frame gives complete satisfaction. The front axle is also very precise when setting the angle. The monster ultimately requires little effort and is similar to its little sister Monster 696 by its stability and homogeneity. In the end, the cycle part is firm but not uncomfortable. Braking on the angle leaves the bike neutral, the suspensions filter out road defects with efficiency but firmness for the fork.

An important point, the Monster seems sensitive to the handlebars. A damaged pavement can be tricky to handle at sustained speed. 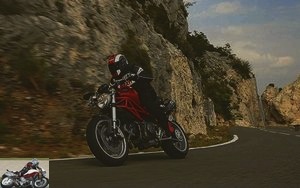 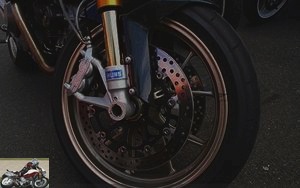 Surprisingly, this one turns out to be powerful, but without biting. However, the radial front brakes, 4 pistons, stop the machine easily. The rear brake is anemic. But my test machine is not well broken in, it is possible that this last point will improve. Otherwise, you must press the pedal firmly.

Very good for a roadster, with the usual aerodynamic limitations. The suspension equipment is perfect and adjustable in all directions: pre-stress and relaxation. 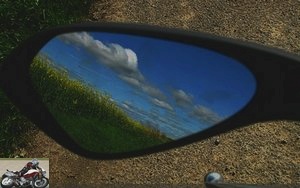 Uh … how do you say honey? It’s not going to be possible. Finally if, but not for long: no support, a spartan position: the pretty footrest plates serve more as a decoration than as a sandbag ride: a monster of selfishness.

The Bridgestone Battlax BT 016 are perfect for taking an angle. 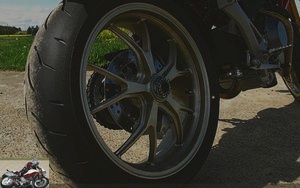 No space under the saddle, no handle, no hook, the U must be hung via a commercially available support … normal for this rather exclusive model but unpleasant for regular use. Since the tank cover is made of plastic, we don’t forget the magnetic bag on the front.

Every 12000 kms. With prices reduced by half … here too, that changes everything. 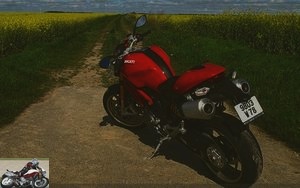 The Monster 1100S is a success: an evolution towards modernism while retaining much of the incivility of its ancestors. The engine is a treat, which relies on an imperial chassis. More efficient and above all perfectly finished, equipped with high-end suspensions and braking, this Italian remains more than ever a diva: a wild elegance and a dirty character. Finally, the price at 11,200 euros is perfectly aligned with the competition that are Speed ​​Triple 1050 or KTM SuperDuke.

Thanks to the Ducati Chambourcy dealership and to "Pam" 😉 for the availability of this bike and the very friendly welcome.