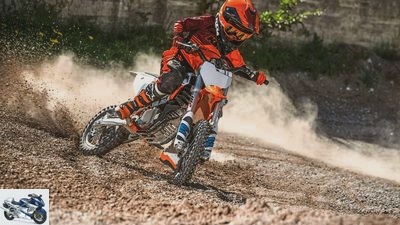 New electric class for juniors in the US Supercross

The offspring should switch.

While the international motocross scene is still relying purely on combustion engines, the AMA (American Motorcyclist Association) is set to pioneer supercross. At least with the offspring: The KTM Junior Supercross series for children aged seven to eight should start in the future on electrically powered cross machines. The characteristic 50 cubic rattle cans could therefore disappear completely from the championship for the first time.

Supercross is driven as a purely indoor series with artificially constructed routes in stadiums – so it is predestined for quiet and emission-free machines. The American Supercross Championship counts as the official FIM World Championship and is regarded as a talent factory and springboard for young drivers towards professional sport. The KTM Junior Supercross Challenge is driven in the races of the professionals and before the sold-out stands in the USA, but does not count as an official World Championship class.

KTM recently presented its new electric crosser for children: the KTM SX-E 5. Its performance should come close to that of the combustion engine, which also makes it attractive for competitive sport. As the previous series sponsor of the Junior Racing Program, KTM will probably also play a major role in the new electric class. The conversion of the fleet of the junior program has not yet been officially confirmed. It is possible that the kids should already start electrically at the annual Monster Energy Cup on October 19, 2019 in Las Vegas, an event before the first official Supercross run in January 2020.

What do you think of electric motorcycles in off-road sports??

I find it exciting.

Doesn’t work at all.