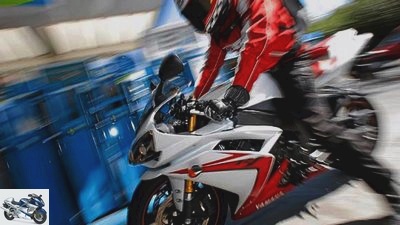 Everything about gasoline: grades, anti-knock properties and additives

Report: All About Gasoline Part 2
Types of petrol, anti-knock properties and additives

It is worthwhile to think a little about the different types of gasoline and fuel qualities before reaching for the fuel nozzle.

And possibly to spend a few cents more

Racing driver Biberle only gives his Hoyasuki 1000 RR the best. When he drives around the golden pineapple on the carbuncle ring, he is filling up with Super Plus or even better 101-octane Ulti-Power from Sharal. Willi Muller, on the other hand, fires his old BMW boxer with the cheapest DIY gasoline: “He’s always been driving with it.” Who is right now??

In both extremes, stored chemical energy should release heat and as much kinetic energy as possible through combustion. Motor gasoline is an energy-rich mixture of 100 to 400 individual substances. It mainly consists of hydrocarbons with five to twelve carbon atoms and oxygen-containing components (ethers and alcohols).

The European Fuel Directive defines minimum requirements. Every petrol station in Germany must deliver petrol certified according to DIN EN 228. It records parameters such as density, sulfur and oxygen content, boiling curve and maximum vapor pressure. Petrol can only be burned in the combustion chamber as an ignitable mixture of gaseous fuel and air. However, vaporizing too soon or too much could cause vapor lock to form in the fuel system. Unlike pure substances such as water, gasoline does not have a precisely defined boiling temperature. Its components evaporate in a wide temperature range from 30 to 220 ° C, which guarantees ignitability in all weather conditions. A decisive parameter of gasoline is the octane number. It is a measure of the stability of fuels at high pressures and temperatures, their knock resistance. This is the ability not to burn in the engine in an uncontrolled manner through spontaneous combustion (“beat”), but precisely controlled by the ignition spark.

Report: All About Gasoline Part 2
Types of petrol, anti-knock properties and additives

Their RON (research octane number) differentiates the individual types of gasoline: 95 for Super, 98 for Super Plus, 100 or 102 octane for premium fuels from Shell and Aral. The higher the RON, the less the fuel tends to knock when accelerating from a low speed, because this is what is known as “Ring” only occurs for a short time, it is relatively harmless.

In contrast, the lower MOZ (engine octane number) records the more dangerous high-speed knocking. This can be inaudible on racetracks and at top speed on the autobahn. In the ideal case, the mixture does not burn with a spherical flame front from the spark plug, but chaotically with a flame speed of around 300 meters per second, which is around ten times higher.

This and the collision of the flame fronts result in extremely high pressure peaks. They can lead to loss of performance and engine defects such as burnt cylinder head gaskets and exhaust valves, as well as damage to the piston. Racing driver Biberle drives well with expensive, high-octane fuel. There is a tendency to knock above all with large individual displacements, especially with air-cooled two-valve valves. They get hotter and the decentralized spark plug causes long flame paths, for example in Guzzis, Harleys or old BMW boxers. So watch out, Willi Muller. The knocking tendency is increased by high compression, high engine and intake air temperatures (full throttle on the motorway, summer), high air pressure, deposits in the combustion chamber and low octane ratings of the gasoline.


Guide to downtime and petrol

What should you watch out for with fuel??


Report: All About Gasoline Part 3

Gasoline: the pros and cons of E5 and E10 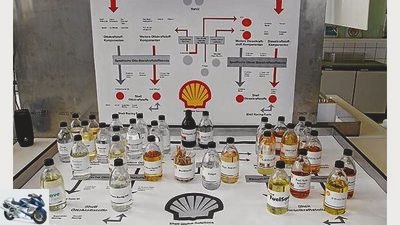 In chemical terms, motor gasoline is a complex mixture of around 100 to 400 different substances: a homogeneous, clear solution. The ingredients come mainly from the dark crude oil (center back) – directly or after synthesis, such as cracking, in the refinery.

Higher octane fuel, on the other hand, offers safety reserves even if the carburettor setting is too lean. Good combustion chamber design, water cooling and small individual combustion chambers reduce the risk of self-ignition. Therefore, modern four-valve engines with a central spark plug are often sufficient with regular gasoline or Eurosuper 95, even if the compression is over 10: 1. In the past, poisonous lead compounds (tetra-ethyl-lead) served as knock brakes, they increased the octane number. They were banned by law. These days, special ethers such as MTBE, ETBE and hydrocarbon compositions with a special chemical structure take on their task. Ring-shaped, branched and unsaturated hydrocarbons stabilize the fuel better than long chains at high temperatures. They are more pressure-resistant and knock-resistant – a hallmark of Super Plus and premium fuels. They also usually burn more cleanly and particularly completely. Powerful, high-speed engines also benefit from this. Sometimes this effect is in good shape “softer” Noticeable engine running and more spontaneous response to throttle commands. The tip is: Just try a full tank of fuel, even if fuel is expensive enough. But only engines with a knock sensor can convert higher octane numbers directly into more power.

If the octane number falls below the minimum, see log book, there is a risk of serious engine damage. The actual octane number required results from the engine construction, weather conditions and operating conditions. It can increase sharply as the engine runs longer: some older machines ring with the prescribed type of fuel and demand more octane. For example, slow driving increases the octane number requirement over a longer period of time because more combustion chamber residues are then created.

As a hallmark of high-quality branded fuels, additives are considered quality-improving additives in high doses. They are intended to reinforce desired properties, suppress unwanted ones and enable additional quality properties, but are not mandatory in DIN EN 228. Special additives, the detergents, keep the engine clean by preventing the formation of new deposits at neuralgic points. These include the combustion bowl, the top rim of the cylinder where no piston ring can go, and the underside of the inlet and outlet valves.

The partially coke-like deposits on inlet valves and piston heads are often incorrectly identified “Oil coal” In four-stroke engines, however, they mainly come from fuel residues.

Above all, deposits on intake valves can make the engine asthmatic in extreme cases. They interfere with free “To breathe” of the engine and can promote uncontrolled combustion. Like a sponge or pumice stone, they suck up fuel and then release it again with a delay. You can lean the mixture, cause cold starting problems and hot jerks and uneven engine running due to filling and power losses. 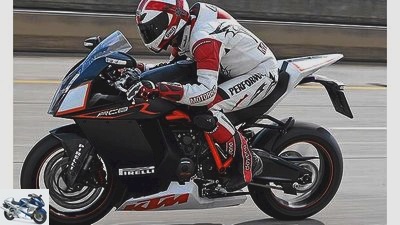 Expensive mistake. After only three kilometers at full throttle with 95-octane fuel instead of Super Plus 98, the engine of the KTM RC8 R was defective. When knocking, the flame front emanating from the spark plug meets a spontaneously arising one. This can result in a hole in the piston.

High-quality additives can also reduce the formation of knock-promoting deposits in the combustion chamber of the cylinder head and on the undersides of intake and exhaust valves. In the best case scenario, effective additives can even remove residues. Engine tuner Hennes Lohr from LKM recommends Super Plus for its engines, “because then they stay cleaner”. “Tuning through fuel” in this respect appears quite plausible. Corrosion inhibitors are further components of modern additive packages.

They cover metallic parts in the tank, fuel lines and the injection system with a protective film to prevent the formation of rust from moisture on metal surfaces. Friction reducers are designed to minimize friction losses in places where hardly any engine oil can reach, such as the first piston ring. Shell promises around two percent savings potential for its efficiency enhancers. B. in 95-octane super fuel “Fuel Save” are included.

Oxidation inhibitors in turn improve the storage stability and avoid the formation of resinous residues (gum) e.g. B. in carburetors. In general, all additives must not leave any undesirable residues after incineration. In southern Europe in particular, you should fill up with Super Plus or higher (if available) to avoid deposits. Because even in the industrialized country of Italy, 95-octane Eurosuper hardly contains any additives.

With expenditure of millions, well-known mineral oil companies are continuously developing their additive formulations in extensive laboratory and fleet tests, also with motorcycles. Tailor-made hydrocarbons and additive packages ensure uniform fuel quality, regardless of the crude oil and the technical level of the refinery. Cheap petrol stations can hardly guarantee this. Large corporations operate their own refineries; however, depending on local conditions, they also buy so-called barter goods. They mix in their own specific additives – either in the refinery or shortly before the tanker is filled (“End point dosing”), partly together with special dyes.

Even in branded fuel, additives only make up around one to 1.5 grams per kilogram (up to 0.15 per mille). This does not diminish their importance. For comparison: the amount of aromatic substances in red wine or detergent in the washing water is much lower. Small concentration, big impact.