Honda has considerably broadened its range in terms of small displacement, in particular by regularly using the same engine base to decline each of the engines in roadster, trail and often a third model from the sports car to the scooter.. And we think of the CB 500 or NC 750 family. Between the two, there is the 650 category of which the CBF is not the least interesting with a displacement close to the late Hornet but with a brand new motorcycle at the level. frame and engine and the latest technological advances from the firm of Hamamatsu. So, replacing the Hornet, a simple beginner’s bike or a combination of the two ? 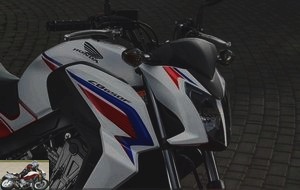 Stocky, racy, the CB650F has all of a hairy roadster in appearance and especially in its white livery, highlighted with blue and red streaks. We find here the lineage of Honda design without upsetting the guns of the genre without denying a certain visual descent linked to the Hornet, in particular with the pot under the swingarm.. 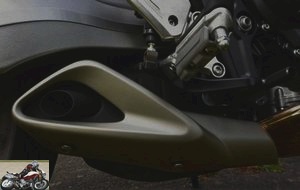 Otherwise it’s a real new bike, both in terms of frame and engine. We thus find an all new in-line four cylinders with dual overhead camshafts with liquid cooling of 16 valves of 649 cm3 borrowed from the sports car, which gives curves of power and torque reached in the high revs, at respectively 11 000 rpm and 8000 rpm. 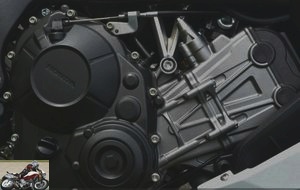 Reading the technical sheet, we could initially say to ourselves that we will have to whip the beast a little to get the most out of it and in particular the 85 horsepower announced (64 kW) and the 63 Nm of torque ?

The finish is exemplary and we appreciate the attention to detail of a motorcycle that has not been made economically, from the quality of the plastics, the invisible wires to the LED tail light.. 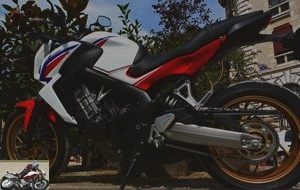 The 1.70 rider almost puts both feet on the ground, despite a high saddle perched at 810mm. In fact, the narrowness of the tank allows you to lower your legs well. Above all, the stationary weight of the machine gives an impression of lightness, closer to the usual felt weight of a 500 than of a 600 and a fortiori of a 650. The arms deviate slightly to land on the handlebars while the bust tilts substantially forward; all offering a particularly natural driving position. Better yet, the legs are perfectly housed – even curled up – in the shape of the tank, with a real impression of being one with the machine. Not only is it pleasant, but it really allows you to feel the machine well to take it very far.

Under the eyes, we find a counter to the standards of the mark, entirely digital, with on the left speed and engine speed and on the right gasoline gauge, clock and partial double trip. And we can even have instantaneous or average consumption. 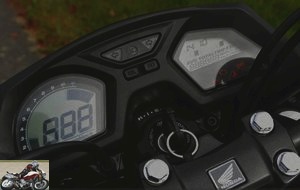 The four-cylinder snorts more muffled than the reference Hornet. It sounds like a sober roadster and not a sporty one. The first evolutions at low speed, between sidewalk and road are done naturally. Light weight, grip and position allow you to make the first laps of the wheels including playing slaloms on the sidewalk without thinking about it. This is all the more important, as a 650 at low speed can significantly drag its rider to one side or the other on very slow maneuvers and in particular the handlebars almost at full stop. Nothing like it here, with a motorcycle that can be maneuvered without any effort. These first moments are often symptomatic of a machine. The CB650F is one of its kind on that first ride that feels like you’ve been used to riding it for years after just a few seconds. Beginners will appreciate. And even sick, in gray weather, after a night of madness, the most seasoned will also appreciate.

Once on the road, the four-cylinder accepts everything, but really everything, including 20km / h on the last report at barely 1,200 rpm! Certainly, the times are not insane at this rate, but it does not knock and it picks up slowly.

Lightweight, handy, the interface is a game of CB650F! It always happens and without looking into the slightest mouse hole. With its low weight and excellent turning radius, you can afford to really play between the lines, including standing still to grab pole position at the green light. And we then choose to extract ourselves gently from the flow of traffic or vigorously depending on the inclination of the right wrist. CB offers almost two faces here. Taken on the last reports in town, it winds quietly and without surprise, while reacting instantly to the request of the throttle. She might almost appear wise then to the seasoned pilot. But as long as we stay in second or third gear, it offers a much more manly and responsive face, almost allowing to attack…. once out of town. 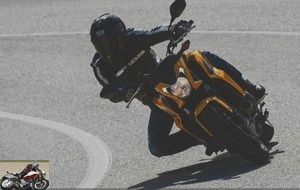 The CB650F is quietly investigating the highway, passing the 5,000 rpm mark at 110 km / h and reaching legal speed while the tachometer is still only at 6,000 rpm, almost at mid-speed! We are then within the protection standards of a roadster of this type with an ideal cruising speed of around 150 km / h. Beyond that and she can largely do it, the cervicals begin to suffer. 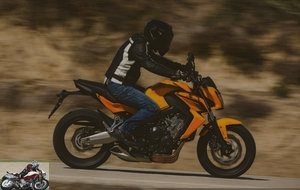 The CB650F had gained confidence from the first laps in town and accepted the motorway without suffering. It then returns to the departmental roads with just as much pleasure, to confirm its qualities and in particular a particularly healthy chassis, which allows it to string together the virolos on small roads naturally, even when the pace picks up. Once again, we will voluntarily go down one or two gears to regain all the necessary traction and in particular to stay above 4,000 rpm, the limit beyond which the cavalry really begins to arrive. Below, it rolls, but it rolls quietly. And this first passenger at 4,000 rpm allows you to really feel that the engine is finding its oxygen and the bike its spaces for expression. Forcibly, at 4,000 rpm, the CB650 winds quietly at 80 km / h in the last gear….

As for the pilot, he will not hesitate to increase the tachometer beyond 7,000 rpm to make him pass the second level and allow him this time to express himself fully while benefiting from the maximum power. and the couple. The right grip dosage is also particularly easy, really allowing it to do what you want. And the CB650 follows, to accept the pace desired by the pilot. 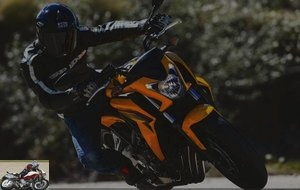 The passenger seat is not large but offers a good place and a good comfort for the category and especially for trips in the tradition of roadsters. Passenger handles hidden under the rear shell provide a good grip. 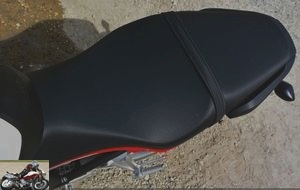 In fact, it is especially the pilot who will suffer from the passenger. Because despite a featherweight of 50 kg for the passenger, the CB650F feels the additional weight and no longer offers the same times, especially in town and on the first kilometer hours. The bike really becomes quieter and you really have the feeling of having to whip it to get the best out of it, compared to using it solo.. 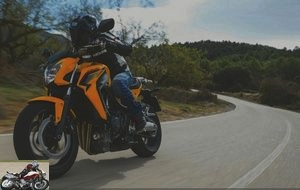 Dual 320m disc up front but with dual piston calipers and 240mm single disc rear with single piston calipers, the CB650F does not stand out in the demo. And yet, both the front and rear are perfect and more than match the power of the machine. ABS is particularly healthy, only really engaging on very strong downforce and only from the rear. And for all that, the machine then remains perfectly online. The front brake offers an excellent feeling. Better, the reflex braking of the beginner who can take too much forward and backward without consideration, offers a short braking in complete safety. The power is there and in addition with a real feeling of security, especially in the wet, thanks to the ease of handling. We take the brakes without thinking about it and it slows down. 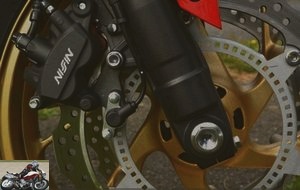 We can put a good U under the saddle. It’s rare enough to report it. Admittedly, it is then either the U or the toolkit, but a real anti-theft U is fine.

There are two lashing pins on the side, completed by two fabric hooks that unfold from under the saddle, providing four attachment points for securing weapons and luggage. 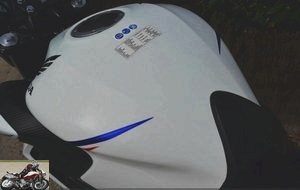 On a mixed-mode city / small road test, the average consumption was found to be around 4.9 liters per hundred, very close to the official consumption announced by Honda at 4.7 liters. With its 17.3-liter tank, the CB thus offers a range of more than 350 kilometers. ! 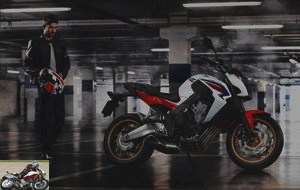 Well-conceived, that is the sentence to sum up the new CB650F. The pilots will miss the late Hornet, whose much more explosive character was much more playful on a daily basis. Those looking for a more exuberant engine will look for an MT-07, or even an ER6. However, the CB is not stingy in sensations, especially in its intermediate gears and will prove to be more playful on a daily basis than an XJ6. Particularly homogeneous, you never get bored with it and its easy handling and its ability to climb into towers will even allow it to be used at larger engines on small mountain roads. Far from the usual beginner’s bikes, it really reassures the beginner while allowing a rider to have fun on a daily basis and with the right amount of potato to make the inter and the outside regularly. And at 6,599 euros, it is very well placed in the market, especially with revisions every 12,000 km, although it is not the cheapest compared to more aggressive competing prices. On the other hand, Honda offers a credit offer from 125 euros per month (until December 31, 2014) … enough to facilitate even more access to the motorcycle…

The technical sheet of the Honda CB 650 F