The prepared Cafe Racer version of the CB 1100 F

Riding on the classic fashion, Honda first released the CB 1100 on the basis of the concept presented in then in 2014 the EX version with its spoked wheels instead of sticks to return even more to the sources of the 80s modules.. The final step in these transformations and variations, Honda unveiled a special preparation in France, the Bad Seeds, limited to 100 copies, the probable result of a meeting between graphic designer Olivier Renouf, Honda France and the brand’s dealers. Reasons to take the plunge for a new world of motorcycles like no other? Test… 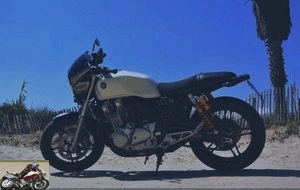 The Bad Seed was made on the basis of the first 1100 model. We therefore find the general line of the model with its clearly visible air-cooled engine, the round front headlight, the 80s tank, the 18-inch five-spoke rims. and the double analog counters to return to the sources. 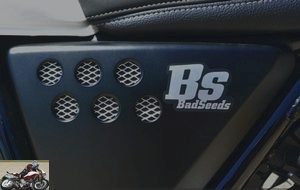 The transformations and preparations are based on all the details that make the difference and that would almost give it an air of Cafe Racer: two-tone hand-sewn saddle, polygonal mirrors and supports cut in the mass, truncated rear part and LED tail light, collector and mat black collar, Yoshimura racing exhaust, mat black truncated mudguard, black rims. Finally, we note the small round indicators that have made a diet, the most beautiful effect. 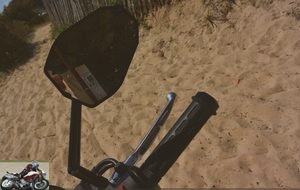 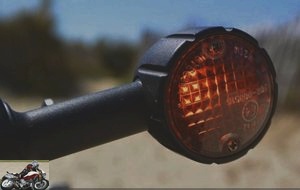 The whole mixes classic style and noted more, modern (like the LED lights) to give a prepared model particularly well finished and departing from the standardized codes of the usual production.. 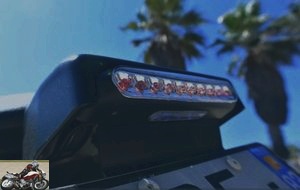 Under the plumage, we find the four-cylinder 4T double ACT of 1140 cm3 developing a power of 89.7 horsepower for a torque of 9.48 mkg, with the fins so characteristic in the pure tradition of air-oil cooling. And the model retains the original 14.6 liter tank.

With a saddle height of 795 mm, the feet will just touch the ground with the tip for the 1.70m pilot while the knees grip the tank well..

What is immediately obvious is the number plate indicating the number of the motorcycle on the 100 copies of this limited series as well as on the handlebars marked with the "BADSEEDS Limited Edition" logo. The eye then turns to the mirrors cut in the mass, beautiful, but however less effective than the original version in terms of field of vision offered..

The saddle feels firmer than the original. We then find the instrumentation with the speedometer on the left and the tachometer on the right. And naturally compared to the version of the 80s, we benefit from a digital display in the center with partial double Trip, totalizer, clock and fuel gauge. 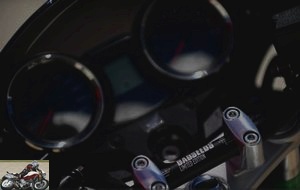 The four-cylinder snorts gently but makes the sound of the Yoshimura exhaust sound much more melodious than the original model. First, very smooth at the level of the gearbox and the 1100 sets off. Despite the full 248 kilos, you can hardly feel the weight of the machine which is easily handled, from the first meter.

Soft under 3,000 r / min, it gets comfortable above 4,000 r / min to take its turns and finally breathe more freely to reach its preferred rate at 5,000 r / min, engine speed or its torque is at its maximum. 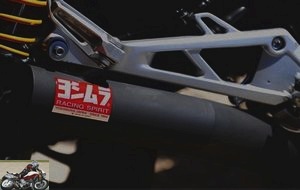 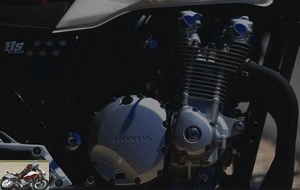 The Bad Seed’s more curved handlebars compared to the original version offer less leverage. Neither better nor worse, the whole simply offers a significantly different driving, more sporty, giving the impression of being able to slip more easily in the traffic and on road to chain more quickly the pif paf of the virolos. The smoothness of the Honda four cylinder is there giving a semblance of ease especially since it accepts to wind without saying anything under 1,000 rpm. The times are then soft and far from the virility of an X11 fire but is able to wake up as soon as we pass 4,000 rpm and even more than 5,000 rpm where the engine is then fully expressed. … even too strong for urban use, perfectly supported by an excellent and powerful braking feeling offering excellent overall homogeneity. 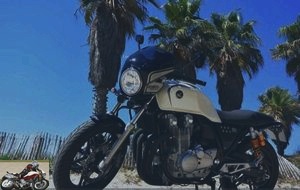 The little Bad Seed windshield seems to offer additional protection compared to the base 1100 model. The overall protection remains that of a roadster but offers 10 to 15 km / h of better protection to allow cruising around 150 km / h without suffering from the neck.. 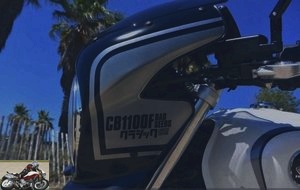 As much the wide handlebars could interfere noticeably when the rhythm accelerated on small road, the handlebars of the Bad Seed makes it possible to chain the virolos with more ease and less effort in the end. It is interesting to note that a few seemingly simple changes that may be perceived as purely aesthetic can really affect the comfort and enjoyment of everyday driving. We then find a very healthy part cycle which allows to quickly chain the virolos, especially as we will have lowered one or two reports to return to the third report. The reaction to the throttle is then clear and makes you want to play. 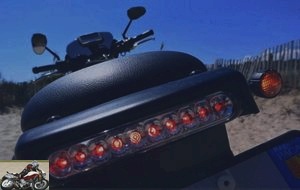 We find the C-ABS braking system and Nissin 3-piston calipers, offering a good feeling and an impressive power but which remains easy to master..

We find a two-seater saddle with a strap in the center compared to the original model, even if the saddle appears here noticeably firmer. But the overall comfort is identical to the 1100 for the pilot. On the other hand, the look has nothing to do with a different treatment of the coating for the pilot (in skin) and the passenger (smooth) which loses in thickness. It is significantly more aesthetic than the original. On the other hand, the passenger loses a little in comfort.. 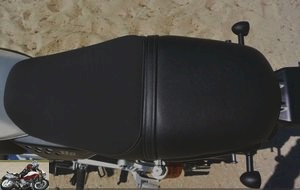 On the other hand, we appreciate the Ohlins shock absorbers which provide more settings and quality of suspension, especially as soon as the driving rhythm accelerates.. 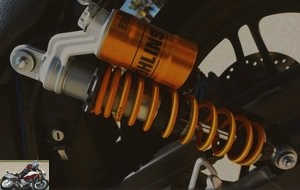 Bad Seed or 1100, the practicalities are the same and limited. Without space under the saddle, it will just be possible to secure a bag, even if the saddle of the Seed is less well in shape than the original classic model.. 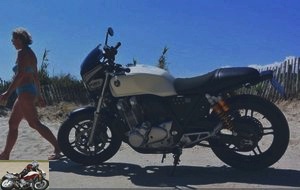 The Bad Seed is above all and above all a look of preparation and the assurance of having a practically unique model. With only 100 models on the market, it is unlikely that you will be able to find another one close to home. For its owner, it is the possibility of accessing an exceptional, optimized machine at a low cost compared to a special order made to a renowned preparer on an individual basis. And for the 15,590 € of the model compared to the 11,299 euros of the CB 1100, the owner will inherit all the original parts replaced for his model. Finally, without mechanical change, it will provide the same sensations as the original model … with Honda reliability … enough to ensure fun for a long time….

The technical sheet of the Honda CB1100F