The four-cylinder alternative to vintage twins

In the Iwata family, I ask for the XJR and in particular its Racer version! 20 years ! The big nasty 1200cc roadster that teased the 1200 Bandit turns 20 in 2015 and 16 for the 1300cc model, dropping from exactly 1188 to 1251cc then. And how can we celebrate such an anniversary for a machine that, apart from injection, has changed little? By surfing the fashion of vintage and Cafe Racer, with a preparation signed Faster Sons. Moreover, suddenly, it is no longer a roadster and impossible to find it in the roadster section of the Yamaha site. It’s a Sport Heritage. An entire program ! It is true that from a distance, we do not immediately recognize an XJR 1300, with this Cafe Racer screen, the seat backrest, the handlebars bracelets and a blackened exhaust. So, real novelty or just new skin? Test of the XJR 1300 Racer …. 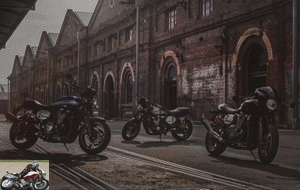 The XJR 1300 Racer owes its DNA to Deus Ex Machina, nothing less. He is indeed one of the most famous trainers, whose slightest preparation costs an arm and a leg…. highlighting the pencil stroke and the transformations carried out well beyond the simple accessorized pieces added. The Deus version was called Eau Rouge. Yamaha has made it more sober and above all more easily remembered by simply adding Racer to its model. Well thought. 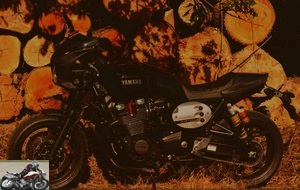 Signed Yoshiro Shimizu, the Head of Design, it is a real Cafe Racer that we discover when approaching the XJR 1300 Racer which does not deserve its name with an inspiration directly from the 70s. , handlebars bracelets, seat cowl and tapered rear with a mini light are already enough to deeply modify the overall aesthetic of the model. 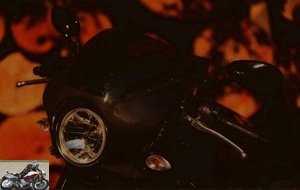 The brushed aluminum plate on the side and the carbon parts from the screen to the fender through the seat cowl finish giving that touch of preparation so "fashionable". The most attentive will also note a more compact headlight (passed to the speed of 35 mm in less diameter), mirrors tinted in black, an aluminum handlebars and the elongated and especially profiled tank, with an eccentric tank cap of the most beautiful effect. . The rear of the frame has been cut short by 10 centimeters in the exercise, contributing to a more compact line. For the rest, nothing has really changed. 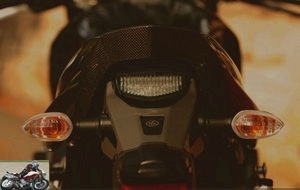 We therefore find the four cylinder of 1250 cm3 air-cooled with double overhead camshaft delivering 98 horsepower and a torque of 108 Nm.. 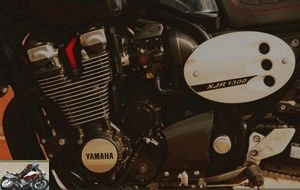 But for those who would like even more modifications, it is possible, in particular thanks to the catalog of accessories, in which one can in particular choose the Akrapovic silencer or the mirrors at the end of the handlebars of the most beautiful effect without forgetting a license plate holder. more aesthetic. 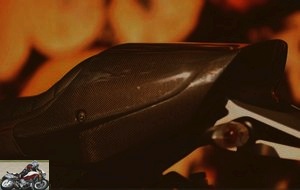 We naturally sit on the same saddle even if the 2015 version now benefits from stitching, closer to a personalized saddle than usual industrial saddles. Despite a thinner tank, the feet barely touch the ground for the 1.70 rider, due to a saddle at 829mm high.

We discover without surprise the same counter as on the original XJR with this double counter and analog tachometer with its red zone at 9,500 rpm, framing a very small digital display. Despite everything, there is a totalizer, a partial double trip, a clock and a fuel gauge. “What else? " 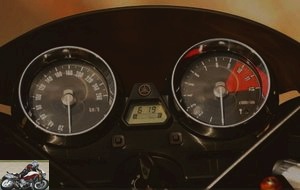 The bust then leans sharply forward and the wrists snap to catch on the bracelets. Indeed, this is not the position of a roadster thus modified but of a sportswoman. But being behind the bubble just above the speedometer is the most beautiful effect to transport the pilot in the past. We find the sensations of the first Cafe Racer, as we were there. 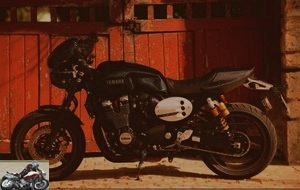 The XJR 1300 snorts with a growl of 4 in 1. First, the injection is a little sensitive when starting with a regime naturally at 1,500 rpm instead of the 1,000 rpm that we then appreciate to wind on the gas trickle, but reacts to the quarter turn of the handle. The resting position on the front makes it easier to grip the handlebars.

To compensate for the pressure on the wrists, we then tighten the knees or even the thighs, which perfectly and naturally enclose the tank, which is thinner than the original version. We become more one with the machine and the well-bent arms make people do push-ups in town. We find the torque of the 4 cylinders in line which accepts to wind up without knocking or complaining on the fifth and last gear at only 1,000 rpm and 30 km / h. 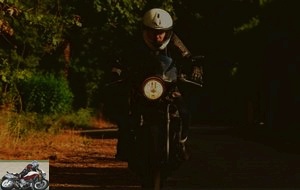 After the first few meters resting on your wrists, you just need to pick up speed to appreciate the machine. Less instinctive and natural than its roadster version, it takes a few more kilometers to tame the conduct, particularly due to the position. We then weave our way through traffic and between cars to position ourselves on the starting line of the next red light with the other bikers. Sustained delay assured. The Racer takes effect.

With your head in the bubble, the position is less of an incentive to play in the city than the roadster version and so far you can tilt more easily at the slightest bend or roundabout and you have to check the speedometer to realize that in the end you are already driving too fast. . Because beneath its old-fashioned appearance, the engine has lost none of its enthusiasm and you easily find yourself at shameful speeds. It is practically necessary to put on the last report in town to stem the tendencies of nervousness of the model. And yet at 50 km / h, it is only 1750 rpm on the last report.

The clutch has just the right amount of firmness, with appreciable overall smoothness, especially when changing gears. We will just be bothered by the vibrations between 3,000 and 5,000 rpm, mainly felt on the first reports. Suddenly, this encourages to pass the next report and rather play on the couple.

You will appreciate the heat given off by the engine in the city in winter…. On the other hand, in summer, you will be in a hurry to get out of town to evacuate the calories.. 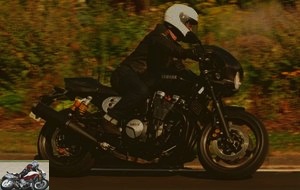 The only downside in town is the tight turning circle which requires a little effort to make a U-turn in a handkerchief. Ah, yes, if you decide to park "on foot" while pushing the machine, you will find that you can feel its 240 kilos. As much as we forget the weight while riding, even from the first few meters, they wake up as soon as we have to push it, including in the garage.

The XJR takes off with smoothness and torque on the highway, at just 5,000 rpm at 130 km / h. It almost seems to be purring at this point, and all it takes is a slight push to propel it above 240 km / h, its head in the bubble. Heading is excellent regardless of speed and large radius of turn. 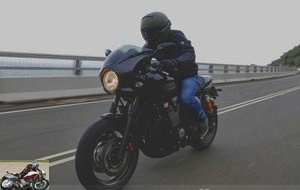 We go down one or two gears…. or not. Because the XJR accepts everything. It is possible to quietly wind up in last gear with all the torque necessary to restart, or on the contrary possible to make the engine roar to climb in the revs to draw the substantial marrow. Without abusing it. In fact, the XJR offers two levels: a first at around 3,500 rpm and another above 5,500 rpm. Then, it’s still nervous and powerful, but in practice, you don’t have to go tickle the red zone to feel all the sensations and staying below 8,000 rpm is more than enough. But the extent of engine uptime is still amazing, from 1,000 rpm to the red zone with always just as much happiness. The chassis, on the other hand, will find its limits more quickly. Pleasant and efficient, in curled or even fast driving, it will start to shake noticeably as soon as the pace becomes arsouille. It’s never dangerous and it just warns regularly as the pace picks up that granny weighs her 240 pounds and her original conception is the age of her arteries.. 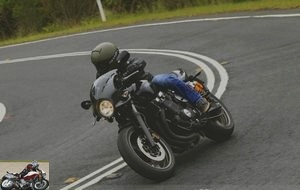 The saddle is soft and the work of the Ohlins suspensions is particularly efficient. The pilot will therefore find his ease there, exclusively selfish.. 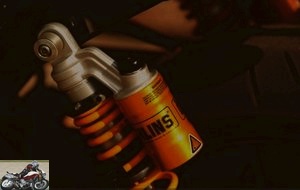 The seat cowl indeed prevents any duo. And for those who would like to welcome a passenger by imagining being able to just unscrew the side screws, they will be at their expense. Because the saddle that hides below is single-seater anyway. 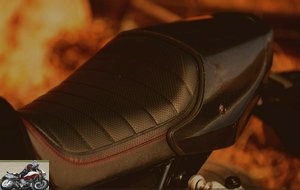 The XJR 1300 does not have ABS as standard. As a result, on the first braking a little hard, things slipped well from the rear. However, the Racer offers excellent front feel and all the power needed to brake hard and precisely thanks to the two front discs of 298mm. You just have to relieve a little of the effort on the rear brake which turns out to be more than a simple retarder during the exercise. 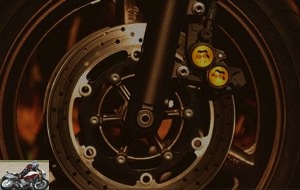 The fuel gauge first appears quite precise with its "6" sticks. In fact the first 3 sticks are only one that fades after 80-90 kilometers. The following are quite fancy depending on the position of the motorcycle when starting. We can thus see the reserve indicator flashing after 120 kilometers before the indicator disappears and reappears two sticks about ten kilometers later. But overall, with a fuel tank of just 14.5 liters, the XJR can barely do 200 kilometers in casting and the reserve easily ignites from 120 kilometers. With an average consumption of 7 liters per hundred, it offers a reduced overall autonomy that can vary between 150 and 200 kilometers. Yet we could drive much longer.

The XJR has lost its side stand and that’s a shame. Don’t look for a place under the saddle either; in fact, under the saddle, you can just put a chain block of the type on the battery. The seat cowl prevents any bag lashing. This is normal, when we talk about neo-retro, we are especially sensitive to aesthetics and not at all to practice. To do this, you have to look towards an original XJR or an MT. 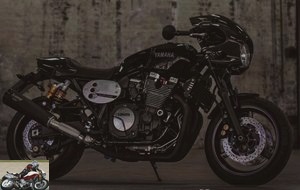 Yamaha has succeeded perfectly in the difficult stylistic exercise of evolving a model to bring it up to date, while preserving its essential qualities. Working on the basis of the roadster to make it move into a neo-retro / sport heritage range is the way to keep an excellent original machine in its range by offering vintage lovers a model signed by a master of preparation and without competing with its MT range. At 11,999 euros, bikers in love with the tuning fork brand may however hesitate with the very latest MT models, which are more efficient in technical and mechanical terms, even if the price remains reasonable compared to the prices generally displayed for all neo-retro models, NineT in the lead and possible CB 1100 Bad Seeds. And then faced with the twin cylinders generally present in neo-retro, the tuning fork brand offers here a quality four-cylinder alternative..