Appeared in 1986, the Honda VFR is now part of a long line of machines apart. First with a displacement of 750 cm3, the Honda GT / sport cube is now 800 cm3 and has been carrying the famous V-TEC since 2002. Monument of mechanical reliability recognized by all, tireless road with marked design and sporting skills, the 2009 vintage is a worthy extension of the stainless family of VFRs. 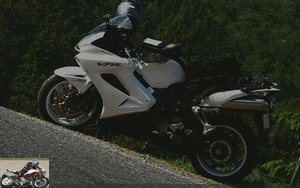 With its sharp aesthetic, the design of this motorcycle makes it mobile even when stationary. The finish is impeccable, the ergonomics are neat, the fit of the elements calls for no criticism.

The most striking features are the finesse of the machine and its apparent aptitude as a duo that many current models in the segment seem to forget. Note that the seat backrest is delivered as standard. Sport obliges…

The chassis is made up of a double aluminum beam frame, using the engine as a stiffening element. The rear suspension uses a single-sided swingarm, well highlighted by the location of the very stylish exhausts under the saddle, a principle which also makes it possible to visually lighten the motorcycle … but also to minimize the space available under the saddle: a U-lock .. and that’s it.
Braking uses a dual system combined with anti-lock ABS, which allows the front and rear brakes to be applied simultaneously, by pressing only one of the levers, on the foot or on the handlebars. 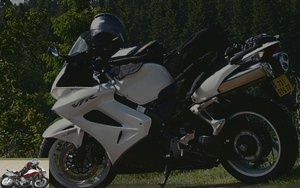 The VFR seems small for a pilot over six feet but is welcoming. The knees are well placed,
the ideal driving position, sporty enough but far from extremes, in order to maintain GT comfort. Only the bubble will turn out to be too short and will require the high option for the older ones.
The rev counter with a white background, in the central position, turns out to be judiciously positioned in relation to the other digital dials, arranged on either side, which distil, for their part, a number of information: tachometer, fuel gauge, engine temperature, clock, outside temperature, partial trips, etc. Also note the presence of a coded key immobilizer system.
The 22-liter tank allows stages of 300 km. The mirrors are large, and vibration free at all speeds.
The full weight is surprising: 244 kg … and yet, we do not feel such a bulk.

The sound of the V4 is very muffled. The engine distills a metallic sound which becomes more hoarse in revs. No engine inertia, the block takes its turns with liveliness.
The gearbox is precise and smooth. 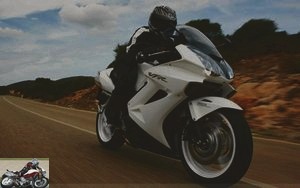 The pleasant control levers, the smoothness of the engine works wonders and allows recovery at low speed, smoothly. VFR remains crisp and easy to place in traffic.
Departmental
It’s time to have a taste of the V-TEC system. Decried when it was set up in 2002, after modification
in 2006, the change from 2 to 4 valves is now 200 rpm lower on acceleration and 700 rpm on deceleration.
In use, the mechanical principle now seems pleasant and gratifies the acceleration pilot very frank and efficient. It is important to watch the speed which will soon be unreasonable.
In 4 °, at 6500 rev / min and about 80 km / h, the speed is almost stalled on this phenomenon of "post combustion
"And allows you to appreciate the driving character at each overtaking, in the noise of a turbine
The rigid geometry of the VFR allows you to enjoy the road serenely, as its all-wheel braking will curb your excess of optimism. However, the simultaneous action of the front / rear brakes is surprising at first, especially on a curve to seat the bike. Admittedly, the chosen lever controls its own function more directly, but the slight plunge forward may surprise a moment. 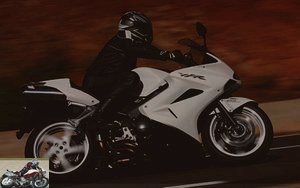 Powerful, it allows you to stop the bike safely with ABS. Dual CBS performs well once you get used to its dual action. In town, it almost allows you to use only the rear brake lever…

The saddle is firm but provides a certain comfort. Driving position satisfies both sporty getaways and longer stages.

Finally a rather sporty motorcycle which still thinks of a duo use. Large handles will allow
in fact the passenger can calmly follow all the evolutions of piloting, seated on a wide saddle. 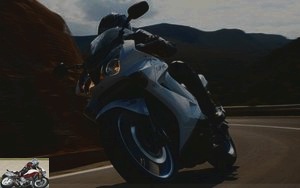 Metzeller MZ 4. Good for taking an angle while maintaining good longevity but the choice of a sportier fit will make the bike even more lively..

A place for a U but little more. The underside of the seat mainly houses the exhausts… 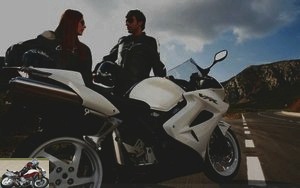 The Honda VFR V-TEC remains arguably the best sport / travel digest of production. Its great reliability, its technological choices, its finish and its suitability as a duo make this motorcycle an essential model and, what is more, almost the only one in its sector..

available in purple and white

The technical sheet of the VFR 800