Since its takeover by BMW, the company from the Nordic region has offered many new products now dedicated to the road. But, relocated to Varese, Italy, Husky does not forget its original production: high-performance off-road and supermoto machines. For the most part, these models are designed for competition and barely modified, Husqvarna thus recalling its double title in the Supermoto World Championship. Evidenced by this SMR 511 which, both the dress and the heart, claim an extreme filiation. 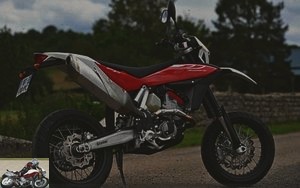 Clean lines, minimalist trim, the SMR, tall and thin, is not encumbered with any artifice, clearly announcing its playful vocation and its sporting origins. Hardly does it give in to the constraints of homologation, adorning itself with tiny indicators and a slender license plate holder. Displaying segment-specific aesthetic codes, the 511 emphasizes its delta front look with a long mudguard. 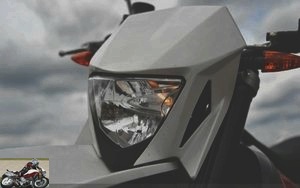 It overlooks a 50mm Marzocchi inverted fork with high travel and fully adjustable, framed by thin scoops whose curve dies on the sides and flares out again at the rear. The assembly supports a long saddle running from the steering column to the middle of the aesthetically-wrapped rear loop. At the end of the seat is the fuel cap, the last two of the 8.5 liters loaded under the seat are visible behind the engine block. 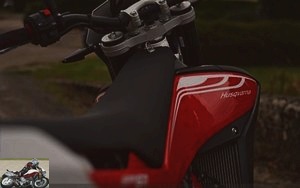 This uses BMW technology, thus taking over the modern single-cylinder fitted to the G 450 X. Its bright red-tinted cylinder head asserts first-class dynamic claims. Equipped with Keihin double-butterfly electronic fuel injection, it also offers two maps, one of which smooths the engine behavior. Modified in bore and stroke (101 X 59.6) the cubic boiler now 477 cm3 and develops 52 horsepower at 8,500 rpm. This power may seem modest but our boxing champion in the light weights with her 132 kilos on the scales, ready to enter the ring. What to strike quickly and efficiently.

The whole takes place in a double steel cradle frame. This architecture differs from the German model and its simplified tubular frame, connecting the steering column and swingarm without fixing in front of and under the engine.. 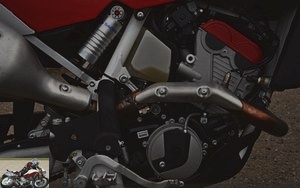 Under the long titanium exhaust, drawn up towards the heavens, the aluminum swingarm takes up Germanic technology with the CTS (Coaxial Traction System). This system eliminates chain length variations during suspension movements, optimizing road holding. The principle is based on the union between the pivot point of the swing arm and the gearbox output pinion. Thus, throughout the movement of the suspensions, the chain does not undergo any change in length, its tension remaining the same. Chain and sprockets should also be less subject to wear. Hopefully, because with this fixture, any change at this level will result in the removal of the swingarm….

Its suspension is entrusted to a fully configurable Sachs shock absorber with a travel of 290 mm.. 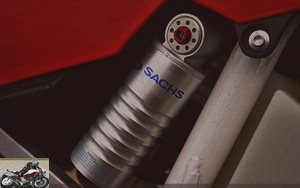 To temper the ardor of his antics with his master, the SMR 511 sports front and rear single-disc wave type, 320 mm and 240 mm. The first is clamped by a radially mounted Brembo 4-piston caliper, the rear element by a single-piston caliper.

A fierce Amazon, the Husky is not easily straddled. Its 915 mm saddle height makes it suitable for long legs. However, the flexibility and the amplitude of its suspension compress the machine, allowing good downforce for customers of one meter eighty and more..

Strict single-seater, the SMR receives its rider’s boots on narrow enduro-type footrests. The seat is extremely thin, both in thickness and width, giving the impression of being seated on a log. Logic for a lumberjack machine. Difficult then to choose your place.

Almost flush with the ridge of the saddle due to an almost horizontal seat profile, the knees struggle to tighten the curve of the scoops. The whole thing ultimately gives the impression of flying over the machine. 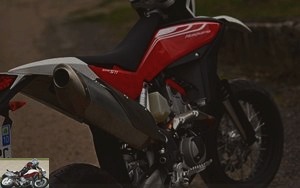 Grabbing the wide handlebars with tapered ends hiding the fork adjustment systems, we dominate a cockpit reduced to its simplest expression and difficult to read. A small digital screen displays just a tachometer, a clock, an odometer and a partial. 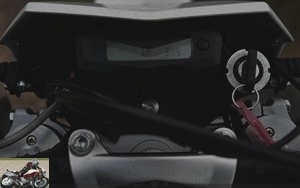 To its right, the ignition cylinder receives a tiny key and the steering is locked by a remote lock on the steering column. The upper triple tree, on the other hand, is made from a solid block of aluminum..

Other details are reminiscent of its off-road sporting origins. Thus, care should be taken with the stand when automatically raising it, making a further 180 ° rotation. Also pay attention to the exhaust manifold, which has no protection at the bottom of the frame, which could burn the right leg of your pants. I experienced it…

Finally, the tiny clutch lever will surprise the neophyte but is easy to handle. In general, the SMR 511 combines neat lines, quality equipment and … race finish. Hoses, wires and thimbles thus do not bother with any primer.

Awake, the single cylinder chops the air with its metallic pounding amplified by the long silencer. The first slap and the Husky takes off without noticeable enthusiasm, the box pulling quite long. Surprised, the selection quickly made people prefer the easy shifting of gears on the fly, a principle more closely suited to the philosophy of the supermot ". 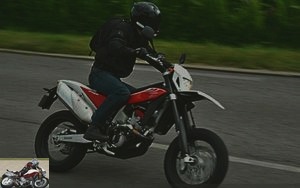 On a daily basis, the pocket wader allows you to turn around in a handkerchief and playful integration into traffic. However, you have to deal with a rocking horse effect generated by the flexible suspensions with long travel..

The machine’s remarkable balance and reduced weight give it a welcome agility in town. Each phase of urban piloting then becomes a pretext for piloting pranks. Small streets, roundabouts … we benefit from the lightness of a high-performance chassis associated with an engine whose liveliness is revealed in the towers. Not very demonstrative at low revs, the engine encourages excess optimism hardly tolerated within the walls of our estates. 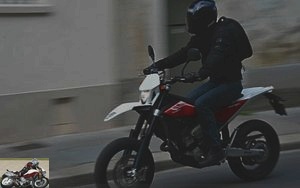 Capable of around 165 km / h at a peak, the SMR 511 will make you bitterly regret wanting to cut it as quickly as possible. Appearing from 90 km / h, the vibrations become painful at legal highway speed. Feet, sitting, hands anesthetized … on board, cruising is never fun. Mirrors also become areas where the blur is hardly artistic. Add to this table the absence of any protection to the air flow and a great sensitivity of the front axle to the eddies on a background sound twisting the eardrums … You have understood, this Husqvarna is nonsense on these tracks and will quickly call you to order. His specialty is tight bends. 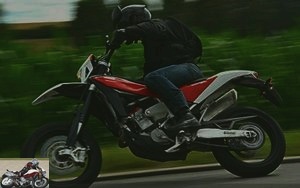 No need to approach the secondary network wisely, the SMR far prefers that it be "slapped" into it. Held at the top of the tachometer, its engine is revealed and never ceases to rev up.

Thus whipped, the 52 horses finally come out of the mechanical bowels. The single-cylinder is furious and quickly revives the machine when exiting curves. The large handlebar support makes swinging the Husky extremely easy, engaging the machine on the angle with vigor. The light crew then twirled around hairpin bends, only limited by the sometimes inconsistent tire grip. The Pirelli Rosso Corsa seem to take a long time to heat up, sometimes causing some evasions.

Progressive, the braking is powerful and adjustable but the implementation of the front calipers raises the machine. The rear wheel is also at risk of quick release, due to the large mass transfer during deceleration. Once strengthened and better braked in hydraulics, the more rigorous damping will reduce the phenomenon a little and will also limit the pumping of the suspensions in large bumpy curves.. 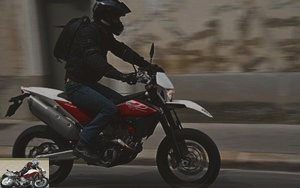 Balanced, light and equipped with quality elements, the SMR 511 will allow many daring fans of the genre. Its liveliness and precision make it an excellent trajectory tool. And on bad pavement, his long legs smooth out the defects of the asphalt.

Despite a significant dive of the nose gear, the braking is efficient and provides a good level of control. The rear element is rather shy but plays its role in curves to refine the trajectories. 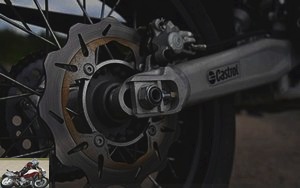 Go your way on this point. Coming from competition, our single Husqvarna conscientiously forgets the quality of reception for his pilot and ignores everything. His daily life is arousal, committed piloting. Any other use would make her appear unpleasant.

Watch out for running out of fuel. The 9 liters of fuel evaporate quickly on contact with the boiling character of the supermotard sylph. 130 kilometers of autonomy on average. But much less for those who are nervous about the throttle. 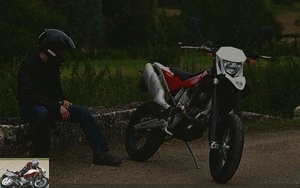 Efficient, the SMR 511 in no way betrays its extremist genes. Everything about her evokes the race. His looks, his equipment and his abilities. Seeming anemic at low revs, the single-cylinder block gives the best of itself as it ramps up. Its liveliness then fully matches that of a skilfully crafted part-cycle.

Such potential results in an equally important exclusivity. Its purchase, like its piloting, must therefore take this constraint into account. And its price. Posted at 7,490 €, the sassy little girl is paying dearly for her gun passes. However, this rate is largely competitive in this segment. The maintenance of its enduro engine also follows the principles inherent in this production. Count on a major overhaul every 40 to 50 hours … But little competition pays the same price to mechanical laws. The Austrian KTM 450 SMR, with its equally demanding engine, asks for € 9,150 to enter your garage. Even better equipped and more radical, it will only be able to express itself on the circuit..

Barely civilized, the SMR 511 will therefore allow you to join the nearest circuit via the most beautiful twisty roads. Living in a region with bends is indeed part of the compulsory pack to remove all the approval of this model…. His requirement is decidedly limitless.