A BMW X5 stops next to me, looks at the motorcycle. Husqvarna? I thought they were just chainsaws! Well yes, it’s a lumberjack’s motorcycle! Because only God knows if this Svartpilen was cut with an ax with its straight lines. Looks like a big log, well cut. In fact, that would almost be a concept in itself. And it was a good surprise when the production model was exhibited compared to the proto presented in 2014, precisely because it was so close to the original concept. And it is rare to benefit from an atypical model as standard. This is the case with the Svartpilen, now available in 401, after the release of the Vitpilen 401 and the big sister 701, pending the release of the Svartpilen 701. Advantage, these models are available for young people with A2 licenses. But what remains for the small model? An ersatz or on the contrary a bombinette? Long-term test of the Svartpilen, in comparison with its sister Vitpilen 401. 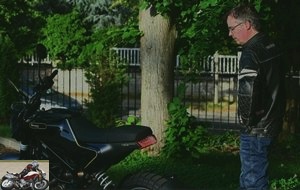 We do not discuss tastes and colors as the bikers repeat in the community. We don’t want to know if she is pretty but to know her behavior. Nevertheless, the Svartpilen stands out from the production, thanks to the design studio Kiska, helped by the French designer Maxime Thouvenin. 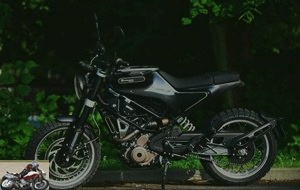 Suddenly, we like it or not, even if the majority of the reactions were enthusiastic about this model, but in any case, it makes people look away at red lights, both by surprised motorists but also by bikers. And I still had a biker on a big roadster last night who was speechless at my side before taking out the compliment: "she is sublime". Taut lines, perfectly horizontal saddle, but now divided into two parts compared to the Vitpilen, the black arrow differs from its white sister … by the color. As Ford would say, the color is yours, as long as it’s black ! 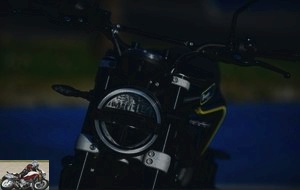 Because in the game of seven differences, between Vitpilen and Svartpilen, color is the first noticeable element. Obviously, it is exactly the same model, except precisely the color, difference of color of the elongated tank which one finds at the level of the rims and bridges, but also of the exhaust. The second difference comes from the handlebars, which are straight and wide compared to the Vitpilen straps. The whole gives a more upright position, even if still tilted forward than the Vitpilen where we are resting on the wrists. Finally, the tires are trail / enduro look tires with Pirelli Scorpion Rally STR instead of Metzeler M5. 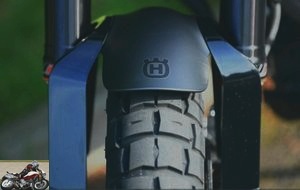 And still to consider off-road outings, we notice a crankcase protector under the engine of the most beautiful effect, even if discreet painted in black. And the footrests are notched. Finally, we note the package carrier on the front tank. For the rest, same headlight and light, same speedometer, same mirrors, same fork, same brakes, same engine, same seat height. Yes, even the engine is identical with exactly the same mapping for the small 373 cm3! An engine based on KTM 390 Duke. Obviously, Husqvarna and KTM being in fact under the same fold, since the takeover of Husqvarna by KTM. 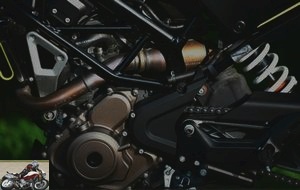 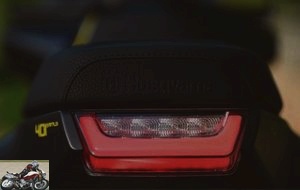 835 mm! The saddle is high AND wide, closer to a trail. Suffice to say that the 1.70m pilot barely touches the end of his feet on the ground and it is therefore necessary to do more than 1.80m to put his feet flat on the ground. However, the bike is light, with a low weight and suddenly, you feel comfortable there right away. Even low-speed maneuvers seem natural aided by a wide handlebar. The bust tilts significantly forward to rest on the handlebars, putting weight on the front. The overall position is quite natural and pleasant and one does not suffer as on the Vitpilen from the position. The hand, body and foot triangle is good, including suddenly for large sizes.

Under the eyes, we find a fully digital round counter which seems a little cramped and difficult to read with small numbers for certain indications. But it is complete with speedometer, tachometer, partial double trip, fuel gauge, average consumption per trip, gear engaged, temperature, clock… 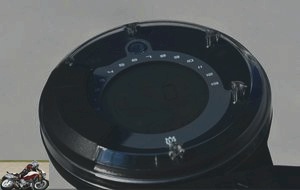 Small nice detail, the commodos are backlit. If you can hardly see it during the day, it is particularly elegant at night.

Note that you can change the position of the handlebars, which given its shape, allows you to have a different overall position, more or less forward. Just unscrew four screws, easily so.

The single cylinder snorts with a loud sound that does not suggest a 400. First, the reaction to the throttle is instantaneous and the mono particularly reactive. 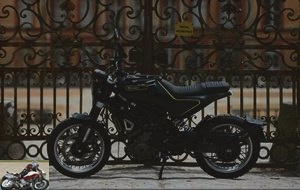 The Svartpilen is a weapon of war in the city. The natural driving position, associated with the lever arm offered by the handlebars and a particularly punchy engine propels you instantly to prohibited speeds. Mono is also very flexible, usable over the range of 2,500 to 10,000 rpm! Admittedly, it knocks at 2,500 rpm on the sixth and last gear at 50 km / h and asks to be at 3,000 rpm minimum, but on the first 3 gears, barely using the clutch, it accepts to be on 2,000 rpm. Suddenly, we can be in third gear at 20 km / h. The potato arrives at 3,000 rpm and it takes its turns so quickly that it quickly reaches 7,000 rpm, when it catapults. There are only 44 horses, but they are available straight away and provide thrills. This is the advantage of having an unbound motorcycle, especially for young drivers. We often hesitate between taking a big badly restrained motorcycle, a little tasteless and a small unbridled machine that gives its full potential. The Svarpilen falls into this category and really gives the banana. 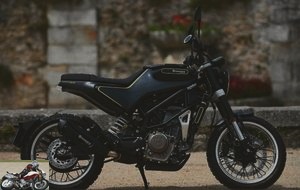 Braking is in keeping with the machine with an efficient rear brake and a front brake offering feeling and bite. Suddenly, between the potato to send and the braking of trappers (or lumberjack), the machine reacts, always very healthily, to rely on the rear shock absorber during acceleration and to dive significantly under braking. And as the sound is a little loud at startup, the sound becomes more serious at mid-speed and makes you want to open even wider. So much so that it becomes a game.

Despite the wide handlebars, the finesse of the machine allows you to slip into a mouse hole with an interfile no more difficult than with a 125. Finally, the featherweight allows easy handling of the motorcycle to improve the turning radius for sneaking around between lines of stationary cars, including at 90 °.

The Svartpilen quickly engages on the motorway, purring at 7,000 rpm at 130 km / h then 8,000 rpm at 150 km / h, knowing that the switch is at more than 10,000 rpm but that on the last report it will have trouble exceeding 160 km / h, a speed already prohibited and prohibited with us anyway. It stays well in line at this speed including in big curves, with more ease besides than the Vitpilen, perhaps because of a less pressure on the handlebars and therefore of movement of the arms having less incidence.. 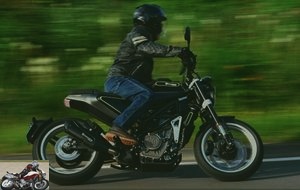 If the Svartpilen was already at ease in the city, as much to say that it is revealed on departmental. The light pressure on the front brings incredible precision to the front axle and the virolos swallow with disconcerting ease. But it’s not just the ease of handling here, but it’s the availability of the engine over a wide range, which allows you to really have the feeling and pleasure on the handlebars. Sure, you’ll forget the last three reports on the small mountain roads, to focus on the 2 and 3, but you’ll have a blast with it. It’s fun, it’s firm, we have fun with it and it is above all very precise, even when the road is deformed. Better still, the bike is neutral and simply steers with the finger and the eye, even is capable of accepting improvisations and cornering a little too fast to get back instantly on the trajectory.. 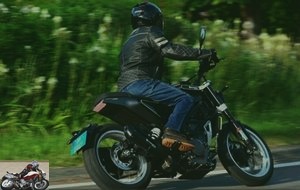 Maneuverability of the Husqvarna Svartpilen 401 on county roads

The saddle is almost square and requires a period of morphological adaptation to get used to it. We would have liked it to be a little thinner to enclose the tank in a more natural way with the knees and not the inner thighs. It is thin and the shock absorber is not particularly flexible. The whole thing gives a firm comfort but without giving a blow of racket on the defects of the roadway. 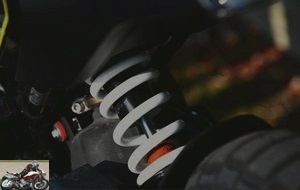 On the passenger side, there is a passenger handle, original, but which breaks with the line of the machine, suddenly, it is removed and the passenger does not have a handle. However, the position is more upright and easier to hold even on a long journey.. 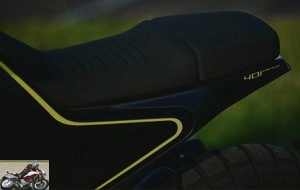 Double saddle, leaving room for a disc block underneath

You have to fill the tank well, above the small internal plate, to get to see all the sticks to display. The computer then announces a pretentious 390 km of autonomy. In fact, consumption settles around 4.1 liters per hundred, or even drops to 3.5 liters in the case of flexible driving, which gives more 250 kilometers of autonomy; knowing that when the screen indicates the reserve and more autonomy, there is still a good liter in the tank, or 25 kilometers. Too bad that the indication on the meter is not supplemented by a small indicator light. And there is no kilometer count at the time of the passage on the reserve either, so it is a blow to be surprised.

There is no room under the saddle; saddle that opens from the left front side to lift the second rear part. If we then raise the front part a little, we manage to slide a small disk block and again not just any.

Fortunately, Husqvarna offers a rack on the front tank. And in black on a black tank, you hardly notice it. It’s better than a magnetic bag and the tank is better protected. Above all, the more upright driving position allows to have a bag afterwards which will not bother the pilot too much depending on his size / height. 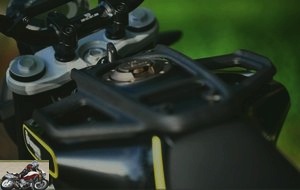 Laying the package on the tank

Husqvarna Vitpilen and Svartpilen are the good surprises of the year, especially in version 401. It is even my personal favorite since the tests at the beginning of the year. Lightweight, manoeuvrable, with an explosive engine, they will delight both A2 licenses and experienced bikers who can have fun on their handlebars. They are both as easy and demonstrative and affordable for small riders despite their high saddle height. The Vitpilen has a more tiring driving position on a daily basis if there is a lot of urban to do. The Svartpilen is more Swiss Army knife because of its more natural driving position, both for the pilot and the passenger. There remains the price at 6,490 euros, identical for the two models, which can be sobering compared to a larger displacement, but often in four cylinders. The driving character here is an undeniable asset which would make me lean more for the 401. Finally, there is the color and especially the look to have a machine unlike any other…

The technical sheet of the Svartpilen 401