Yamaha are the kings of the platform. Understand by this that they have become able to release a multitude of variations from the same base and therefore at little / less cost. Example number 1: the XSR and Tracer derivatives from the MT-07 and MT-09 binomial.

Example number 2: this Racer derived from the mid-size custom, the Bolt. Or how to change your mind by basically modifying a saddle and handlebars. The Bolt having already been covered many times on Le Repaire (test of the R version here and test of a prepared version there), what follows is more of a further test than a full test.

So let’s recap: on a Bolt R basis, Yamaha changes the riding position with new handlebars (which result in new stems) and a new brake master cylinder. Aesthetically, it is the headlight hood and fork bellows that distinguish this model, while the new saddle, ground clearance improved by suspension with revised travel allow a little change in dynamism and "experience. driving the machine ". 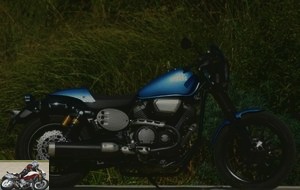 It is true that it is in tune with the times, the underground garage scene as well as Wheels & Waves or Motors and Soul-style events tending to exhume the spirit of boardtrackers, these cruiser-style motorcycles with curved handlebars, to image of the recent Harley-Davidson Roadster. And then when we see the number of guys who put handlebars bracelets on brave Triumph Bonneville or on no less brave Harley-Davidson 883 Iron, we say that Yamaha would have been wrong not to exploit the vein.

Useful clarification: the XV 950 Racer was first offered in the Yamaha catalog at € 9,599 and it would be disguising reality to claim that customers were lining up in front of dealerships to buy it. At the end of summer 2016, the price was repositioned to € 7,999 and this gives this bike a new boost. So that’s what is done.

Available in three colors (black, a yellow and "historic" black in homage to Kenny Roberts and this blue with a silver band), the XV 950 Racer presents rather well and has earned me many compliments during the few days spent on its handlebars. . Its dynamic look is seductive, its golden spring suspensions and separate fuel tank catch the eye, as does the Alcantara-style saddle.® and the contrasting paint strip on the tank. Beautiful, so. 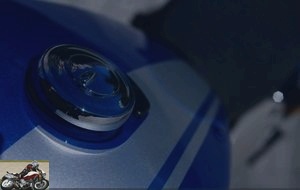 But especially from afar. Because looking into the details, we come across a level of finish that this XV shares with so many other entry-level motorcycles and positioned on the same price list. There is a big day between the headlight plate and the optics, the side covers coming from the light of the XJR 1300 Racer do nothing, the small splints which allow to pass the clutch cable or to support the speedometer. ‘have nothing graceful, the speedometer itself is quite plastic-knock (and the absence of tachometer, on a "Racer", no but, hello, what!). In short, it is average. 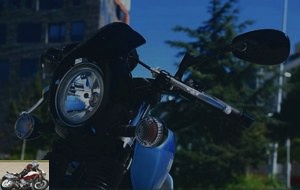 Despite everything, the LED rear light is quite nice and the belt drive reassuring, while the surface treatments of the V-twin and the exhaust are rather rewarding.. 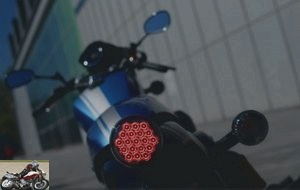 First intelligence test: find where the ignition key is: in the front at the bottom right of the fuel tank. This same key activates a steering lock, placed elsewhere on the column. Contact: good news, you will be able to be totally focused on driving this "Racer", because the distractions will not come from the dashboard! Fully belonging to the stylico-artistic period "Playskool", it still has a few functions (time and two trips) that are activated by a button on the right stalk. The display remains readable, even in direct sunlight. 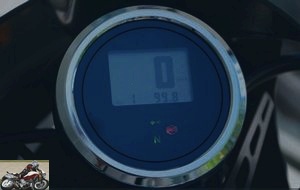 Another good news: the driving position! The Yamaha ergonomists have worked well, because the assembly of handlebars bracelets and foot controls returned to the central position seems quite natural, even for a large carcass like mine (1.88 m) on a machine that is ultimately quite compact. The pressure on the wrists is not pronounced and the location of the footrests does not interfere with the maneuvers. Ergonomic qualities that the Harley-Davidson Roadster cannot claim, for example. On the other hand and this is not prohibitive, it is just a trait of character: the knees do not enclose the tank, but the air filter on the right and a piece of cylinder head on the left. 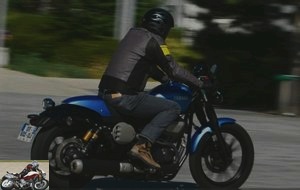 Compared to a normal XV 950 Bolt, work on the saddle and suspensions increases the seat height of this Racer from 690 to 765 mm. Nothing prohibitive, the bike remaining slim and compact. And dense, too, but the 251 kilos are not really felt.

As we have just seen, we feel good on this XV Racer, even at low speed. As a result, the slalom between the cars is nothing complicated, as long as the turning radius remains correct and the V2, very flexible, allows you to restart in 3rd from 30 km / h. The XV 950 Racer remains a compact and narrow machine, (it is only 830 mm wide). In short, the city is only a formality and so much the better because this machine is intended to stay there. On the other hand, the transport of an anti-theft device is an aporia. 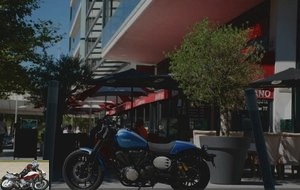 The riding position alone makes the Racer more suited to this exercise than the base XV 950. Leaning a little forward, the pilot is naturally better prepared to face the elements, or simply the wind.

The engine, on the other hand, remains the same: with 52 horsepower, do not expect a large road going, but to drive at legal speeds, or even a little more (which the Den advises against with the greatest firmness, even if you are big boys and big girls). More than by its power, the XV 950, Racer or not, in fact seduces by its flexibility, its roundness and its availability at all times.. 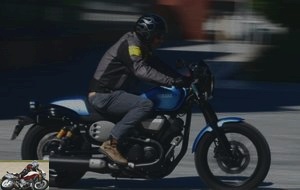 The stability of the machine, on the other hand, is quite average. Take the test: give the handlebars a short, sharp movement. On most machines, the structural rigidity of the frame will absorb this movement within half a second. The XV 950 Racer, on the other hand, can get into a few dry ripples before returning to normal..

Because, despite its name and its posture, there is nothing sporty about the Racer. We believe in it for a moment, because the driving position, well collected around the front axle, makes you want to throw yourself body and soul into the first corner. And there is the great disillusionment! Because the Michelin Commander II tires have nothing sporty in their grip (gaffe on the white bands and the wet!) Nor especially in their feedback, while the ground clearance is quickly limited (in addition to the frame and footrests, which is classic on a "custom", we even rubbed the base of the selector!). 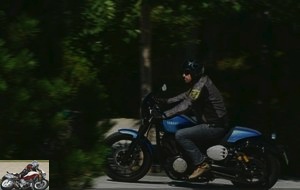 But the stability issues raised in the above paragraph quickly creep into the small-road attack. At the same time, I am not a cadrologist and far from me the idea of ​​questioning a team that also knows how to manufacture M1s, R1s and many other high-performance and phantasmagoric machines, but see that an executive has at the same time. Both a crease and a rounding does not totally match my design of stiffness. And I might be wrong, by the way. But the fact remains that the XV 950 Racer doesn’t like to be roughed up on small roads..

On the other hand, in a ride use, we appreciate the smoothness of its engine, the available torque (the maximum torque value is available from 3000 rpm) which makes it possible to resume honorably from 70 km / h in fifth gear, as well as the gearbox which is generally forgotten. 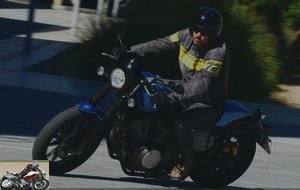 If it was enough to repaint shocks in gold for them to become effective, it would be known. It is also on small roads, with these twitching and poorly damped suspensions, that one becomes aware of the weight of the machine, which is forgotten in other circumstances. However, compared to a classic Bolt, the suspensions have been revised: the fork has gained 9 mm of travel to 144 mm and the double rear shock absorber 6 to 116 mm). Notwithstanding these modifications, the quality of damping is not one of the strong points of the machine: it follows quickly and it bounces without much grace, which encourages to give a little hand on bumpy roads. We will have understood that the Racer attribute remains a little cerebral and, in any case, difficult to work miracles at a lower cost from a custom base. The tires are identical to the normal XV 950. 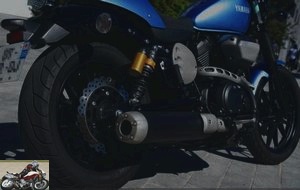 The braking is of the XV 950 Racer is average, sufficient if we understand the purpose of the machine. At the front, the system is entrusted to a simple 298 mm disc with 2-piston caliper, at the rear, it is also a 298 mm disc. We know that on custom-designed machines, the weight distribution favors rear braking. However, the central ABS is quite sensitive, so we will distribute the effort on this Racer, whose device is in fact identical to that of the other XV 950. 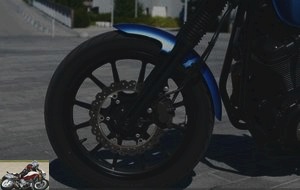 The Racer can count on a saddle significantly softer than that of the standard XV 950. The driving position is comfortable and allows you to consider big stages without suffering, although I noticed some vibrations in the left strap.

For the passenger, it will be less happiness because of the footrests placed high enough and the lack of a grab handle. The seat backrest is removed via two hexagonal screws. 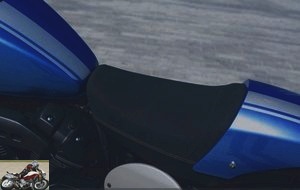 Despite the strap handlebars, the driving character of the XV 950 Racer does not encourage it to be tugged at all times. Or maybe there is a casting error. Still, in current use, consumption can easily fall below the 5 l / 100 mark. Enough to guarantee more than 200 kilometers of autonomy thanks to the 12 liters of the tank.

What a mouthful, the XV 950 Racer? There is a bit of that, since dynamically, you should not ask too much of it.

In addition, it is a little alone in its niche: in the spirit, but 5,000 € more expensive, we find the Harley-Davidson 1200 Roadster and in terms of performance and in the niche of the motorcycle "sporty look but quite placid" , there was also the previous generation of Triumph Truxthon, but whose rating on occasion is struggling to drop. The XV 950 Racer relies on its style and the smoothness of its engine on a daily basis to seduce those who like a certain form of serenity on the road, without being too much of a fan of the custom genre.. 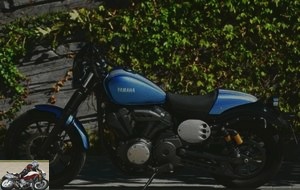 Anyway, its repositioning in the price list (official Yamaha price in September 2016) makes it more attractive than a classic XV 950 Bolt (€ 8,499) or even a Bolt R (€ 9,599). Seen from this angle, the Racer is undoubtedly a bargain for fans of the genre..

The technical sheet of the Yamaha XV 950 Racer