There are the traditional customs and then the long-distance motorcycles that promise to take you far as a duo with all the necessary equipment. The newly unveiled Indian Roadmaster delivers on this promise… What to compete with a StreetGlide or a Goldwing? Test… 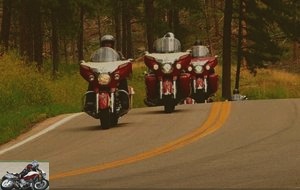 The Roadmaster is both novelty and knowledge. Because it is on the basis of the Indian Chieftain that Indian has developed its model for a grand touring version. We therefore find the same 111ci or 1811 cc VTwin Thunder Stroke engine with electronic injection and air cooling, the same chassis, the same grille and instrumentation as well as the same side cases.. 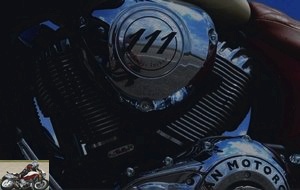 On the other hand, the model is dressed even more with a new particularly elegant rider and passenger seat with its stitching, a top case, adjustable protections as well as additional storage at the front which brings the total storage space to 142 liters. ! That’s all ? The passenger also gains footboards instead of footrests. 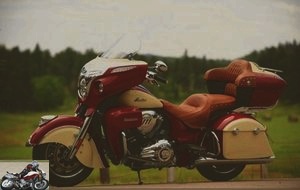 We then find everything that already makes the Chieftain happy with its quality finishes and the multiple Indian seals from the front mudguard to the long skirt and its luminous Indian (which also serves as a position light) to the counter, to the mirrors, to the saddle, to the brake fluid reservoir, to the suitcase locks or to the engine which displays the Indian head sculpted in the metal through the reservoir which incorporates the embossed mark. The whole offers a certain presence, rewarding, which involves as many stops of passers-by and compliments in its passage: "Nice Bike"! We’ve stopped counting the number of times we’ve been complimented riding this bike, including from sports car drivers at red lights.. 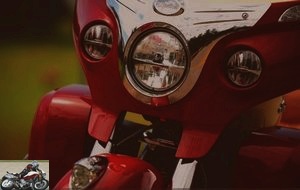 Large and protective front face, electrically height-adjustable windshield are now accompanied by protections for the legs with a system of manual openings and closings. It is difficult to offer more surface to protect the rider without sacrificing design and line. Successful bet for Indian.

Finally, there is the transponder, which replaces the need for a key and which allows you to turn on the machine only if you are less than a meter from it … but also to block the closing of the suitcases. distance. The supplied key just allows you to lock the steering at the level of the front fork on the right.

Finishing details are everywhere, right down to the presence of the leather on the tank. 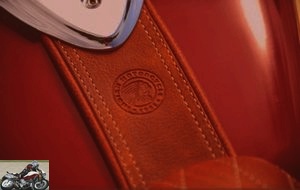 All large tourist models can be a little tight in saddle height for the 1.70m rider. Suddenly, it is rare to have your feet firmly on the ground. And with the full weight of these monsters, low-speed maneuvering often gets your adrenaline pumping. With the Roadmaster, nothing like it. Despite the new saddle, both feet are firmly on the ground and the legs themselves are slightly bent. Suddenly, all maneuvers are easily done at low speed, including the rear steps with the feet to park and without a cold sweat. The very wide handlebars (1012 mm anyway) allow you to take good control of the lever arm offered. The feet are positioned slightly forward but not excessively. It’s a cruiser position but it’s still reasonable, especially since you can still have a straight back if you want, unlike many customs where the round back is the only possible position.. 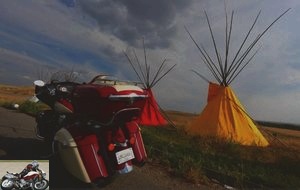 Under the eyes, we find the large dashboard, with the counters and tachometers with the Indian in the background, which frame a digital display on a red background more than complete for the radio (channel, volume, preset), the pressure front and rear tires, the engine oil gauge, the partial double trip and totalizer, the average and instantaneous consumption which completes the analog fuel gauge. All the information is there, clearly visible, even under the sun.
The commodos are standard with the radio setting on the left and the cruise control on the right, under the warning. 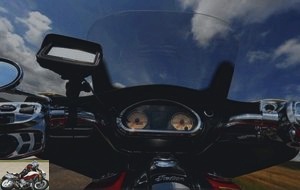 And we appreciate the well-positioned cigarette lighter socket, which allows you to connect a recent GPS with large screen like the TomTom, particularly greedy or to simply recharge a camera or a laptop. 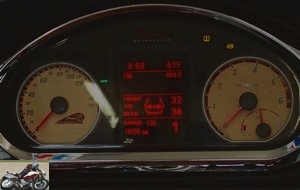 The Roadmaster snorts with a low, hoarse sound. It’s rewarding but without waking up the whole neighborhood. The big vtwin barely vibrates. First, we feel the additional weight compared to the Chieftain with 421 kilos compared to the 369 kilos of the Chieftain, but it is forgotten from 3km / h. That said, the Roadmaster completely accepts to run on the wire in first under 10 km / h without killing its driver and is free from low speed driving.. 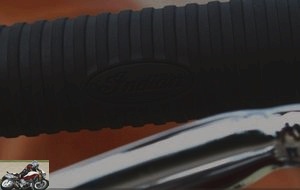 The handlebars are wide and require a minimum of attention to allow to practice the interfile. However, we find the enormous torque and especially the incredible availability of the engine which accepts to wind on the last report at 30km / h or whose only first report allows to drive in the city being already outlaw at 65 km / h. Admittedly in sixth at 30 km / h, it knocks and it requires a little dosage of the clutch but rare are the VTwins of this size which accept to be thus abused. Better, the Roadmaster as the Chieftain accepts to start as well in second, that in third or even fourth and without stalling! In short, lazy people can practically drive only in second or third in the city, without ever changing gears and smoothly with all the comfort of the big couple.. 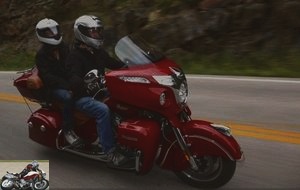 The Roadmaster climbs briskly to 130 km / h. The following kilometers hours are more linear but she agrees to quill regularly up to 150 km / h then takes the step, able well laced to go tease a good 180 km / h. But where ? Apart from Germany, you will already be unlicensed in Europe and in most of the rest of the world. The important thing is not there. That said, even at this speed, the protection offered by the bubble is simply very good in the low position and more than excellent in the high position, or beyond the protection against wind and bad weather, the bubble makes it possible to do reduce the noise in the headphones by several decibels. It is not absolute silence but the noise difference between low and high bubble is really spectacular and all without generating any infrasound or parasitic noise as sometimes happens. Better the silence offered to the pilot is also accompanied by silence for the passenger who benefits from hearing comfort.

The top case does not generate any parasitic movement at high speed, even with wind, as is sometimes the case and in any case does not generate any difference in behavior compared to the Chieftain. And when we speak of Chieftain, the contribution of the Roadmaster is made here mainly on comfort, not identical suspensions, but the saddle for the pilot and especially for the passenger who now has a real space for him, which allows him to go well over 200 kilometers in one go without suffering. In fact, completing 600 kilometers in one go (apart from refueling) is done without even thinking about it.. 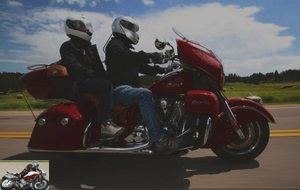 Particularly at ease on the motorway, the Roadmaster finds its marks just as much on departmental roads. The front end is just as light as the Chieftain, especially since the tires are new. We tried two different climbs and the new one really brought handling that was sometimes more delicate with the worn one. In cool driving rhythm, the virolos are linked happily. As soon as the pace picks up, the Roadmaster trains its driver a bit and reminds him of its weight of xxx kilos, not to mention the loaded suitcases and the passenger. Everything is fine as soon as we stay within the legal speeds … And then we need a little more anticipation and muscles and take it where we want. 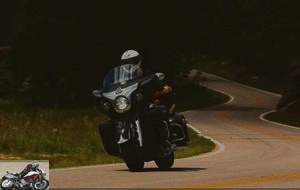 Front and rear brakes provide excellent feeling … and the power to stop the Indian, especially with the addition of ABS. The brake lacks power to stop the Roadmaster on its own, while the rear brake seems almost more powerful, but the two combined offer undeniable and reassuring braking safety. The 119mm front fork does an excellent job and limits diving tremendously, even with very heavy braking. 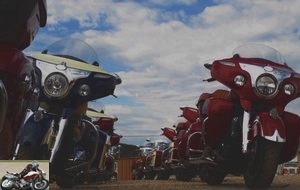 The pilot did not gain in absolute comfort compared to the already very good Chieftain, despite the contribution of the backrest which nevertheless maintains the lower back better. On the other hand, the passenger has gained ideal comfort for planning long journeys..
The suspensions do an excellent job of smoothing out road defects particularly well.
The only downside concerns the heat released by the right exhaust which seriously heats the calf (and which the rain pants did not resist either) from the moment the ambient temperature exceeds 25 ° C.. 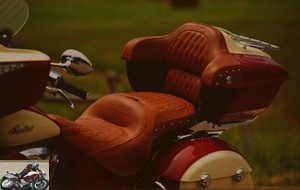 With the same 20.8-liter tank but with a higher weight and a larger frontal surface, the Roadmaster consumes significantly more than the Chieftain, falling rather in reserve at 290 kilometers against 340 kilometers for the Chieftain. It can even fall on the reserve at 260 kilometers, when it is made to live a pace of 130 km / h on the highway. But this remains an average consumption of less than 6 liters per hundred, very reasonable given the size of the motorcycle.. 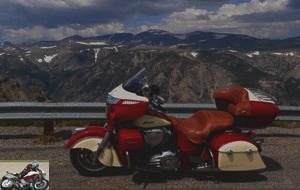 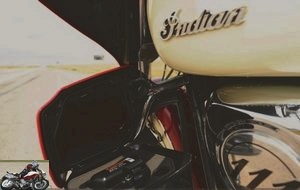 And it is true that we put some in the Roadmaster and even more if we decide to use the original fixing grid present on the top-case and the tank. Enough to leave for a few weeks with weapons and luggage without any worries. The suitcases can easily accommodate either the interior suitcases offered by Indian or models such as the particularly practical Givi 33/46 LT Trekker. 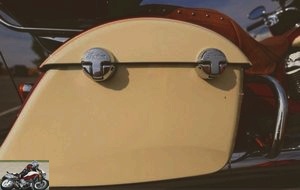 The tank allows you to attach a large enough tank bag, like the IXS; and as it is quite low, it allows even larger saddlebags without obstructing the view of the meter. 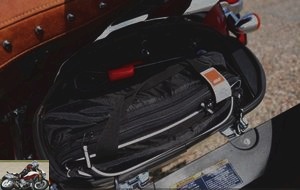 The top-case has a carpeted interior but also an additional light that is very practical at night, as well as a cigarette lighter socket.. 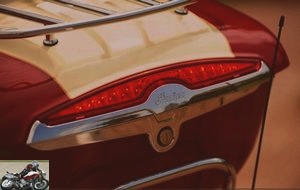 The niche of grand touring motorcycles is finally quite small and has just won a real model with the Roadmaster which comes to fight severely on the lands of Goldwing and UltraGlide. More expensive than a Goldwing but less expensive than an Ultra Glide if we take into account the basic characteristics which are options in the competition, the Roadmaster brings its share of positive points especially in terms of handling and ease of driving, including included in duet and loaded. At 27,990 euros, the almost 1,800 euros difference with the Chieftain is justified in view of the possibilities of additional trips. Finally, the Roadmaster is to enter the world of Americans with a history and a status, all with the elegance of the line offered by the model..