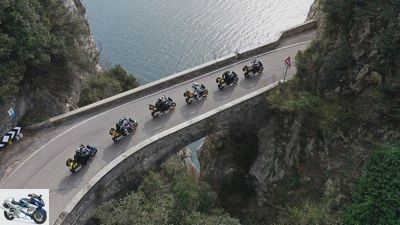 The motorcycle tire specialist Metzeler is announcing numerous new products for 2021 and is starting with the Tourance Next 2. Developed for adventure bikes whose riders demand top handling and plenty of wet grip.

For Metzeler, the Tourance Next 2 is the self-chosen new benchmark in the enduro road segment, as the fourth generation of the well-known Tourance ancestral line should particularly benefit from the combination of the latest technologies and materials and is a worthy successor to the Metzeler Tourance, which has been in the range since 2012 Be next. The word new development is not mentioned in the context, however, the Tourance Next 2 should still be the ideal choice for owners of enduro street motorcycles whose riders are looking for the look of an all-terrain tire but also value high comfort and mileage on the road. 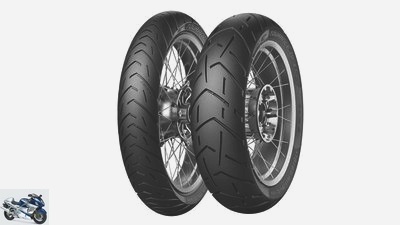 New profile for traction and mileage

Visually, the new Metzeler street tunnel is clearly recognizable as a member of the Tourance family. The new profile picture is very similar to that of the predecessor Tourance Next, even if at first glance a higher proportion of profile grooves is noticeable, but all of them appear significantly smaller and finer than the old one. Metzeler hopes that the redesign of the negative tread will result in better and constant traction even with decreasing tread depth, as well as uniform wear on the tire. A technology that Metzeler calls Dymatec.

A new compound with a high silica content (85%) is used on the front tire. The filler silica has the advantage of warming up faster than the added carbon black – it makes the tire black and durable – which improves grip in cold and wet conditions and reduces tire wear when cold. The skin at the back has a multi-compound tread, which, depending on the dimensions, either by means of a cap&Base structure or using the new Hyperbase technology from Metzeler. What both have in common is that the central compound at the rear is identical to the compound on the front tire, while the shoulder compounds on the rear tire are made of full silica and thus offer side grip and traction when accelerating in a lean position.

Cap&base: the central mix extends below the two mix areas of the tread in the shoulders. The advantage of this should be that the softer mixture is stabilized by the harder mixture when turning and the motorcycle behaves more smoothly in an inclined position.

Hyperbase: the central and side mixtures are applied to a dynamically and thermally stable 100 percent carbon black mixture, which gives the effect of the cap&Strengthen the base and protect the mixture from overheating when cornering very quickly with high loads at the same time.

What type of enduro rider are you?

After a little over eight years, Metzeler is launching the Tourance Next 2, a new road tire for large enduros, whose drivers almost exclusively collect kilometers on the asphalt. Not entirely unnecessary, the engines of the right motorcycles have become enormously powerful during this period. Top dog GS has achieved almost 20 Nm more torque during this time and over 140 hp are nowadays good form in this segment. Every grain of grip is welcome.